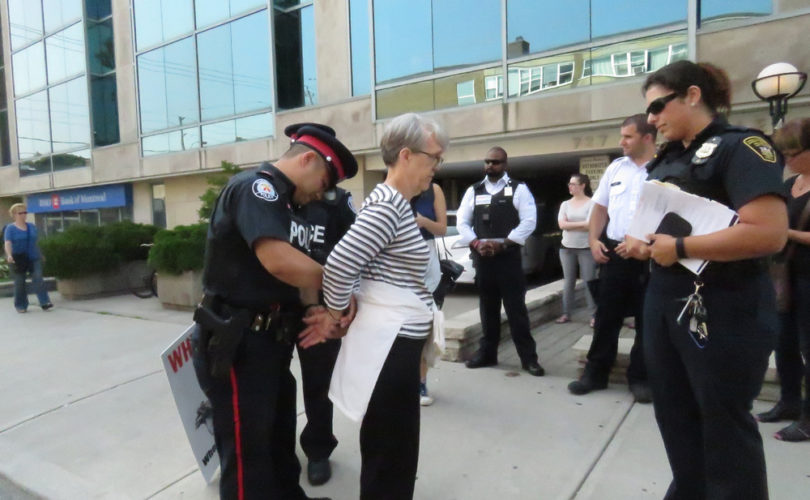 TORONTO, January 14, 2016 (LifeSiteNews) – Judge Mavin Wong of the Ontario Court of Justice at College Park has reserved judgment until January 21, following a one-day trial Wednesday of pro-life prisoner Linda Gibbons on a charge of disobeying a court order.

Gibbons was arrested September 2 while walking up and down in front of the Morgentaler abortion facility, which is located in an office complex on 727 Hillsdale Avenue in Toronto’s upscale Leaside neighborhood.

The 67-year-old grandmother, who has spent just over 11 years in jail for her pro-life witness, was charged with disobeying the 1999 permanent injunction prohibiting certain activities within 500 feet of the Morgentaler abortion center.

Her lawyer Daniel Santoro argued that abortion center staff acted under a “misapprehension of the level of protection they are under with the injunction,” in concluding that Gibbons’ behavior on that late summer’s day was unlawful.

Ontario Superior Court Judge Gary Trotter acquitted Gibbons on appeal in July 2014 for her 2012 conviction on the same charge, he told the Court.

Trotter tossed out the verdict of trial judge William Wolski that Gibbons’ conduct was “intimidating.”

He also made “a distinction at law” that Gibbons’ behavior amounted to peaceful leafleting and attempting to persuade others of her point of view – constitutionally protected activities that the court order does not prohibit, Santoro told the Court.

And Trotter’s decision has “binding authority on the Court,” he stated.

But Crown counsel Daniel Brandes argued that Gibbons’ conduct on September 2 breached two other clauses of the injunction: “causing a nuisance” and “disturbing or interfering or attempting to disturb or interfere with” the operation of the abortion facility.

Brandes called as witness Sarah Workman, an administrative staff at the Morgentaler abortion facility for four years, who testified that on the day of Gibbons’ arrest, about “four or five” of the ten people in the waiting room “seemed upset, they seemed incredulous” that there was a “protestor” outside on the street, a circumstance that she had announced to them.

“We are on the second floor, we can see through the windows,” she told the Court. “I see the protestor standing outside, she’s walking back and forth.”

“I had a feeling my picture was taken that day,” Workman told the Court,  adding, “and I just did a Google search and I found it online.” This felt like an “invasion of my privacy,” she testified.

Workman did not explain why she left the second-floor abortion facility and ended up outside, where she was among the photographers.

Questioned by Santoro, Workman testified that Gibbons remained on the public sidewalk and that “she did not block anyone from trying to enter the clinic.”

Santoro asked Workman to confirm from a photograph if she was familiar with the sign Gibbons carried, which has a picture of a baby on it.

“The sign conveys a message,” Santoro said. “She believes abortion is wrong. That’s her purpose.”

He asked that although as Workman testified, the clients asked her why Gibbons was there, “at least in part they understood she was expressing opposition to what was going on in the clinic?”

“That is correct,” Workman said.

He asked Workman if it was fair to characterize Gibbons’s actions as “peaceful protest.”

Hohenberger testified that on September 2 she spent “at least three hours, my entire morning,” responding to Gibbons’s presence on the public sidewalk, even though, as she told Santoro, it was not part of her formal duties.

First, she told security Gibbons was there, then, along with Workman, she made an announcement in the waiting room for people to “remain calm,” and that “once their procedures were done, we would escort them out the back way.”

She then returned to her office, which “overlooks Hillsdale,” to take cell-phone photos of the scene below, Hohenberger testified. Several of these photos were introduced as evidence.

The accounting supervisor also “went to get license plates” of “the group” of about six people standing on Bayview Avenue “watching,” and whom she “assumed” were “all associated with Miss Gibbons,” testified Hohenberger.

Since she began working at the Morgentaler Clinic in November 2011, Gibbons has shown up “at least five times,” testified Hohenberger, and “there are always people who film or observe” her.

Santoro noted that it might be “more fair” to say that, “when Ms. Gibbons gets arrested sometimes people are there to cover it” and “report on it.”

Crown counsel Brandes told the Court that he and Santoro identified in the photos entered as evidence, the National Post reporter Christie Blatchford, as well as a blonde-haired woman and man who were Blatchford’s videographer and photographer.

Brandes also entered as evidence an agreed statement of facts from security guard Joe Colletti, who reported that Gibbons spoke to several couples that day as they approached and entered the building.

The GardaWorld employee testified that no conversations took place between Gibbons and the people entering the abortion facility, and “gave no evidence” that anyone responded to Gibbons, noted the Crown counsel.

Colletti reported that Gibbons spoke in a “calm, even voice,” and “did not impede anyone from entering or exiting the clinic,” Brandes told the Court.

In his final summation, the bearded Crown counsel stated that: “We have a valid court order here that prohibits anyone from causing a nuisance or trying to disturb” or interfere with the business of the abortion facility.

Gibbons’ attempt to speak to people “on their way to exercise their legal right to obtain a medical procedure,” he told the Court, “is a blatant attempt on her part to disturb.” She also “caused a nuisance,” because the abortion facility staff “had to deal with it.”

For his part, Santoro argued that Superior Court Justice Trotter ruled it was insufficient to claim that conduct violated the “spirit” of the court order.

Trotter also ruled Gibbons’ conduct fell within the “realm of peaceful leafleting” as defined in a Supreme Court 1999 ruling stemming from a K-Mart labour dispute, and was therefore “constitutionally protected.”

Judge Wong asked Santoro if there was no difference in facts between the 2012 conviction that Trotter overturned, and the case before her.

She questioned if Gibbons’ carrying a sign might be construed as picketing, which is not constitutionally protected. Santoro stated that the Supreme Court in K-Mart ruling described picketing as a “formidable” line made up of a number of people.

Although the facts of the case Trotter overturned were “slightly different” than those before the Court, Gibbons’ conduct in both instances “amounts to the same impact,” he argued. She was trying to “dissuade and discourage patients” and engaging in “peaceful leafleting.”

If there is “collateral damage,” such as people feeling upset, “as a result of peaceful expression, that is the price that is paid” by a free and democratic society, he said.

After the trial ended, Santoro told Judge Wong that the van transporting women prisoners to Vanier Correctional Institute, a trip that can take two hours, was “extremely cold inside,” and asked Wong to recommend to the deputies that “transportation facilities are heated.”

About eight pro-life supporters took in the day’s trial. Gibbons, who refused to agree to bail conditions, and has been remanded in custody since September 2, appeared tired but serene.

Judge Wong will pronounce judgment on Gibbons on January 21, at College Park Court Room 504 at 10:00 a.m.