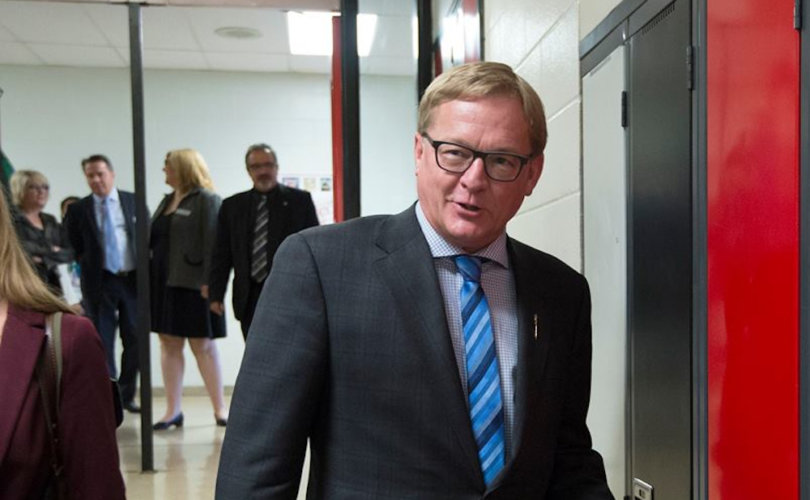 GRANDE PRAIRIE, Alberta, January 5, 2017 (LifeSiteNews) — An Alberta judge has approved an agreement between Alberta’s NDP government and a Christian homeschooling organization that will see the government restore funding to the organization it abruptly shut down in October over allegations of financial misconduct and breach of provincial laws.

Justice E.J. Simpson of the Alberta Court of Queen’s Bench signed a consent order of January 5 that directs the NDP to restore funding by January 10 to Trinity Christian School Association of Cold Lake, which oversees the homeschooling of 3,500 students, an estimated one-third of Alberta’s homeschooled students, as well as the classroom education of a dozen pupils.

However, the consent order also stipulates that the Derwent-based Wisdom Home Schooling Society, which Trinity had contracted to administer its homeschooling program, will have “no governance role or decision-making authority in the Trinity organization.”

And it directs Alberta Education to appoint and pay for a financial administrator “in good faith consultation with Trinity as to the individual selected” to “oversee Trinity for a term of twelve (12) months, the time of appointment to be extended if necessary.”

“I think it’s a fantastic resolution to what was at one point an acrimonious case,” Jay Cameron, lawyer for Trinity and Wisdom, told LifeSiteNews in a telephone interview.

“On Trinity’s side, they get their funding back,” noted Cameron. “The funds that were withheld will all be reinstated, and funding will go forward in accordance with the agreement.”

And the Alberta government now gets “additional oversight in regard to policies and procedures.”

The order Simpson approved was the fruit of some two weeks of negotiations between the Alberta government and the province’s largest homeschooling association, Cameron said, adding: “Alberta Education should be commended for coming to the table and making a good agreement that protects kids and protects parents.”

The justice, however, administered a tongue-lashing to both sides, according to a report on Newstalk 770, comparing the dispute to one between a married couple who don’t seem to care about their children.

He called it a “smear” by the government to label a $5 sympathy card a “questionable expense.” But he also blasted Trinity and Wisdom Home Schooling Society as “self righteous” for not making changes earlier.

“You’re all acting like heathens as far as I’m concerned. You could have saved taxpayers a lot of money (by mediating this privately),” Simpson stated, according to the Edmonton Journal report.

“Litigators often become positional; they fall in love with their position,” Cameron told LifeSiteNews, adding that the “judge was grateful that a resolution had been reached, but he thought that the parties could have been more reasonable sooner.”

Education Minister Dave Eggen pulled Trinity’s accreditation on October 25, 2016, effectively shutting down both Trinity and Wisdom overnight, and advised shocked parents to make other arrangements for their children.

At the time, Eggen cited a government audit that alleged Trinity contravened provincial regulations by contracting Wisdom to administer its homeschooling program. The audit also alleged that Wisdom and Trinity misused the government funds.

Each Alberta homeschooled child receives $1,670 of taxpayer funds for educational expenses. Fifty percent of this goes to the school board administering the child’s homeschooling, and the remainder can be claimed by the parents.

The government investigators alleged that Wisdom spent $5.2 million, or 90 percent, of the homeschooling grants Trinity received in 2014/2015, that money earmarked for educating students was used to fund inappropriate expenses such as babysitting, funeral expenses, and double-dipping of mileage.

The auditors alleged the board and administration of Trinity Christian School Association and Wisdom Home Schooling Society was largely represented by two families, and that “family members approved employment contracts for other family members. The total amount paid in salary to these two families is more than $2.76 million in the last three years.”

Moreover, the audit alleged that Wisdom has been leasing office space for $105,000 annually, which was estimated at roughly ten times market value.

Wisdom Home Schooling Society, for its part, issued a statement calling the investigators’ allegations “partial truths amounting to calumny,” denied all of the reputed improprieties and stated it would settle the matter in court.

“Part of the [January 5] agreement is that any leases or salaries or anything like that will be set in accordance with market values,” Cameron told LifeSiteNews. “So that’s one of the things Alberta Education gets to do, they get to look and see whether or not salaries and leases are in line with the market and if not, they can correct it.”

Moreover, the consent order directs that Trinity will employ all staff, and be responsible for all accounting functions, which will flow through a single Trinity bank account. Future provincial funding will be granted on a monthly basis.

Cameron said there is “no specific time frame” for the Alberta government to appoint a financial administrator, but emphasized that the court order requires it must do so “in good faith consultation with Trinity.”

Simpson granted an injunction in November allowing Trinity and Wisdom to continue operating, pending the January 5 hearing into funding.

In the November application, witnesses for Trinity alleged that Alberta Education personnel showed up at Trinity on October 25, but refused to identify themselves to teachers and parents, and “accosted” students by demanding their names and handing them letters.

Cameron argued then that the government’s move was “ill-considered, draconian, unlawful, in bad faith, as well as being extremely rude and inconsiderate to the parents and the children of this province,” and that the NDP government had irreparably harmed Trinity’s reputation.

Minister Eggen stated in October that he had referred the matter to the RCMP and Canada Revenue Agency, but Cameron said he could not comment on what may come of that. He emphasized that “this is an agreement that had been reached with Alberta Education.”

Critics have accused the NDP government of acting out of bias towards homeschooling given the party’s longstanding opposition to education options outside the public system. In 2013, prior to her rise to Alberta Premier, NDP leader Rachel Notley told the legislature that the NDP are “steadfastly opposed to private schooling.”

Jason Kenney, who is running for leadership of the Alberta Progressive Conservatives, lauded the decision in a tweet decrying the NDP as “irresponsible”:

Glad that a Judge has repudiated the NDP's irresponsible decision that stranded thousands of home-schooling students https://t.co/SbqSvVEJpN