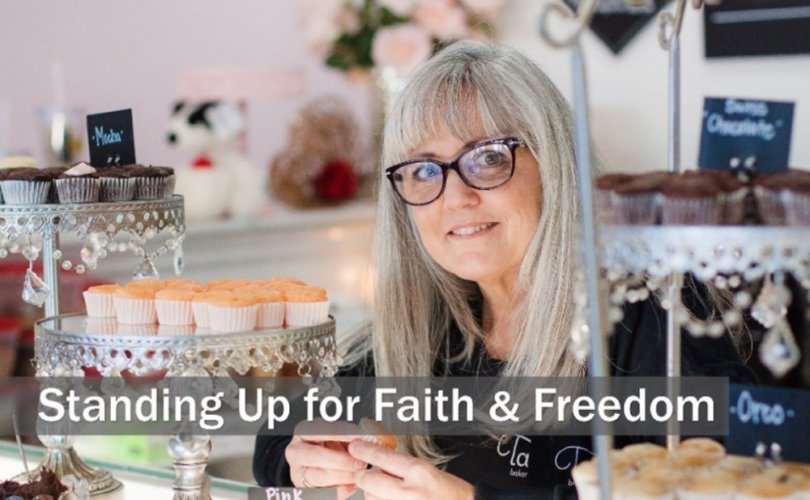 BAKERSFIELD, California, May 23, 2018 (LifeSiteNews) – A California judge has issued his final judgment in favor of a Christian baker who refused to bake a cake for a same-sex “wedding,” ruling that cakes celebrating events are a form of speech.

Last August, Mireya and Eileen Rodriguez-Del Rio sought a wedding cake from Tastries Bakery owner Cathy Miller, who declined on the grounds that affirming a homosexual union would violate her Christian beliefs, Bakersfield.com reports. The couple filed a complaint with California’s Department of Fair Employment and Housing (DFEH), arguing that the state’s Unruh Civil Rights Act forbids businesses from refusing to provide services on the basis of sexual orientation (among other grounds).

“Everyone is God’s creation and I love everyone,” Miller has previously explained. “But there are certain things that violate my conscience, and my conscience will not allow me to participate in things that I feel are wrong. Most of what that’s based on is scripture.”

The department subsequently sought an order compelling Miller to bake the cake, but Kern County Superior Court Judge David Lampe sided with Miller in February, and issued his final judgment earlier this month.

The judge granted the “laudable and necessary public goal” of a discrimination-free marketplace, but drew a distinction between simply refusing to sell products such as tires, which are not “sacred or expressive,” and artistic expression. Miller, he explained, was being compelled to “use her talents to design and create cake she has not yet conceived with the knowledge that her work will be displayed in celebration of marital union her religion forbids.”

“Cathy gladly serves everyone who walks through her bakery’s doors, including same-sex couples. But she should not be forced by the government to express messages that conflict with her sincerely held religious beliefs,” said Freedom of Conscience Defense Fund (FCDF) president Charles LiMandri, whose organization represented Miller pro-bono. “We are pleased the judge recognized that the First Amendment protects Cathy’s freedom of speech.”

The FCDF is seeking $438,000 in legal fees from the plaintiffs, citing the state’s Private Attorney General statute, which calls for awarding fees to a case’s victor if (among other things) it “resulted in the enforcement of an important right affecting the public interest, and where a significant benefit has been conferred on a large class of persons.”

Accordingly, Lampe’s most recent order deemed Miller “the prevailing party for purposes of the fight to recover litigation costs as permitted by law.”

FCDF expects the state to appeal the ruling. Miller is just one of many Christian small business owners who have been sued for refusing to provide services to homosexual “weddings.” One such example, Jack Phillips’ Masterpiece Cakeshop in Colorado, is currently before the Supreme Court, in a case expected to have profound ramifications across the United States.