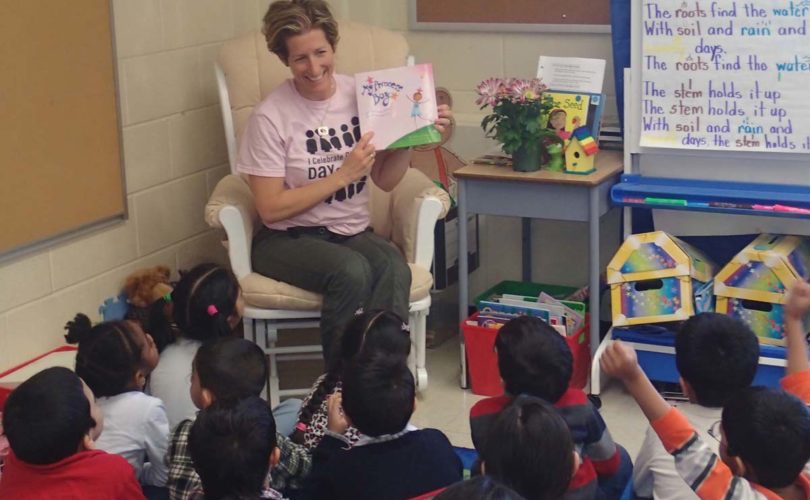 Lesbian teacher Pam Strong teaches a classroom of elementary students at Ellengale Public School on Day of Pink in 2012.http://etfovoice.ca

(LifeSiteNews) – Federal Judge Allen Winsor dismissed a challenge to Florida’s Parental Rights in Education law Tuesday on the grounds that the “harms” claimed by the LGBT activists who filed the lawsuit could not be traced to enforcement of the law itself.

Earlier this year, Republican Gov. Ron DeSantis signed the law, which bans schools from teaching children in kindergarten through third grade about transgenderism and other sexuality-related issues, limits discussions of sexuality for older children to “age appropriate” content and requires parents to be informed of any changes that could affect their child’s physical, emotional, or mental well-being.

Left-wing activists and their media allies misleadingly dubbed the measure a “Don’t-Say-Gay Bill,” framing it as a hateful attack on LGBT teachers and students and scoffing at the notion that it tackles a real problem, despite scores of examples of teachers engaging in LGBT activism in schools.

The lawsuit against the law, spearheaded by the LGBT lobbying groups Equality Florida and Family Equality, claimed that it violated educators’ free-speech rights under the First Amendment, due-process rights under the 14th Amendment, and the federal Title IX education law.

— Article continues below Petition —
Demand that the Archdiocese of Indianapolis let Kim Zember speak!
Show Petition Text
4963 have signed the petition.
Let's get to 5000!
Thank you for signing this petition!
Add your signature:
Show Petition Text

But Fox News reported that Winsor determined the plaintiffs lacked standing to sue on the grounds that “most of plaintiffs’ alleged harm is not plausibly tied to the law’s enforcement so much as the law’s very existence … Plaintiffs contend the law’s passage, the sentiment behind it, the legislators’ motivation, and the message the law conveys all cause them harm. But no injunction can unwind any of that.”

“Plaintiffs’ complaint is replete with allegations showing their asserted injuries flowed from something other than the law’s enforcement,” the judge wrote. “Indeed, they allege that the law’s ‘harmful effects’ were ‘already manifest’ even before the law became effective — before, that is, it even could be enforced,” the dismissal read.

The parental rights law drew national condemnation from the Biden administration as well as left-wing entertainment giant Disney, the latter of which contributed to Florida lawmakers’ decision to revoke the “special district” status enjoyed by the corporation’s theme park in the Sunshine State.

DeSantis has stood by the law, which has led to Florida schools removing objectionable materials from their curriculums.

“As students head back to their classrooms this fall, I’m happy to clear up any ‘confusion’ the media may have about appropriate curriculum,” DeSantis said in August, adding that “Math, Reading, Writing,” were appropriate, and “CRT, Sexualized Content, Transgender Ideology” were not. “Florida schools will educate children, not indoctrinate them,” he vowed.

The governor’s actions to crack down on left-wing proselytizing in education have contributed to a reputation DeSantis has established as one of the most proactive and conservative leaders in America, generating interest in him as a possible candidate for president in 2024.