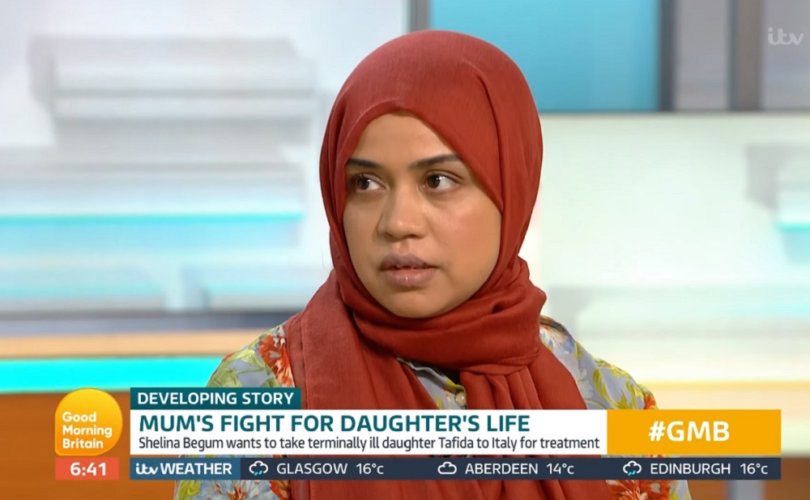 LONDON, England, October 3, 2019 (LifeSiteNews) ― Little Tafida Raqeeb has had a stay of execution.

Today, a High Court ruled that the dangerously ill child may be removed from the hospital where doctors wished her to die and be taken abroad for treatment in Italy.

Tafida, 5, has been on life support in London hospitals since February of this year, having suffered a sudden and rare rupture in her brain.

A brain stem test has shown that she is not dead, but her London-based doctors are convinced that she will never recover from her minimally conscious state. They planned to cease all treatment and remove her from a ventilator, thus bringing about her death.

Tafida’s parents, construction engineer Mohammed Raqueeb, 45, and lawyer Shelina Begum, 39, disagreed with this plan, and made arrangements with the Gaslini Pediatric Hospital in Genoa to continue their daughter’s treatment.

However, representatives of the Barts Health NHS Trust, which includes Royal London Hospital, where Tafida is currently lying, went to court to argue that it was in the child’s best interests to die.

When defending their right to take Tafida to Italy, her parents cited their religious faith, arguing that Tafida belonged to a Muslim family and that, according to Islamic law, only God could decide to end her life.

In his judgement, Mr Justice MacDonald alluded to the family’s Islamic faith when he explained why he was deciding to allow Tafida to go to Italy.

“[W]here a child is not in pain and is not aware of his or her parlous situation, these cases can place the objective best interests test under some stress,” he said.

“Tests must be looked for in subjective or highly value laden ethical, moral or religious factors … which mean different things to different people in a diverse, multicultural, multi-faith society,” he said.

Tafida’s parents are said to be “thrilled” by the ruling, and their legal counsel said it was an “enormous relief” for them. They now want to go ahead with Tafida’s transfer from London to Genoa.

However, Barts Health NHS Trust has indicated that it will appeal the ruling.

Tom Evans, the father of doomed toddler Alfie Evans, told LifeSiteNews that he was pleased by the decision. “I think it’s great news, and I’m really pleased for the family. I had … great faith in [Tafida's] legal team,” he wrote.

Caroline Farrow of CitizenGO U.K. told LifeSiteNews that the judge’s recognition of cultural and religious beliefs was “extremely encouraging.”

“CitizenGO has been supporting Tafida’s family and like them we were overcome by emotion following the Mr Justice Macdonald’s ruling today,” she said via social media.

“It is extremely encouraging to read that the judge has determined that cultural and religious factors must not be ruled out when it comes to the consideration of human dignity,” she continued.

“Tafida’s family should never have been put through this ordeal and we hope that this ruling will curb the enthusiasm and haste of doctors to make ethical judgements to remove life-sustaining treatment for children without having due regard for the wishes and rights of the parents.”

The Society for the Protection of Unborn Children has issued a press release calling the judge’s decision a “victory for human life and justice.”

“Our hearts go out to Tafida and her parents, whose precious daughter has been allowed to live,” said Dr Anthony McCarthy, SPUC’s director of research.

“The court ruling sends an important message to the doctors at the Royal London Hospital that their view of Tafida’s life was wrong. It has always been clear that ventilation and transferring Tafida to Italy would not in fact have been harmful and any costs would not have fallen on the NHS.”

The news that the Barts Health Trust will appeal the decision has tempered SPUC’s joy somewhat.

“The decision to appeal shows that elements of the medical profession are sticking to the sinister path on which the most basic rights of citizens have been repeatedly overturned by those on high,” McCarthy added.

But today Tafida’s family, friends, and well-wishers have reason to celebrate.

“Happily today we have seen a just resolution. Mr and Mrs Raqeeb’s reasonable request to do the best they could for their child has been upheld, albeit with the prospect of further anguish and struggle to protect Tafida’s life,” McCarthy said.

“We wish these loving and valiant parents every success in caring for their child.”