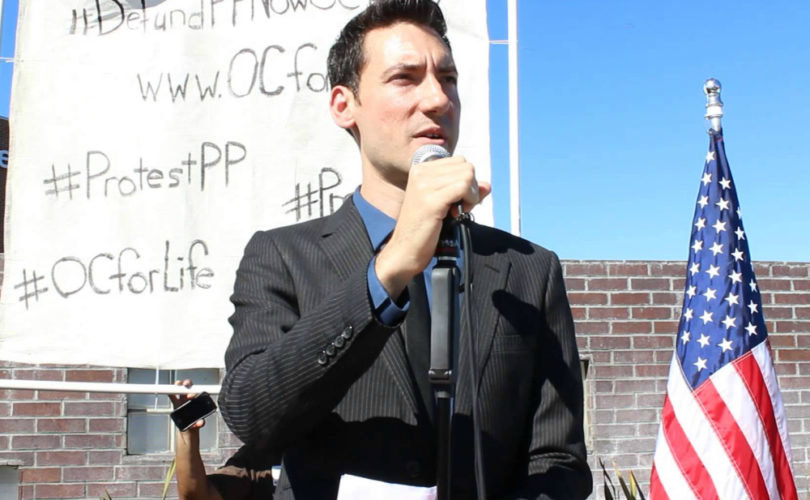 August 28, 2019 (LifeSiteNews) – The most serious charges against the pro-life journalists who exposed Planned Parenthood’s baby-parts scandal will proceed to trial and ultimately be decided by a jury, U.S. District Judge William Orrick ruled.

David Daleiden and the Center for Medical Progress (CMP) have been locked in legal battles with Planned Parenthood and the National Abortion Federation (NAF) since the summer of 2015, when their undercover videos revealed abortion industry insiders expressing interest in profiting off organs from aborted babies, which is illegal. The abortion groups accuse the pro-life investigators of breaking California privacy laws, and obtained a gag order against the release of additional videos.

Last Friday, Orrick issued a 173-page ruling that dismissed several of Planned Parenthood’s claims but let stand their Racketeer Influenced and Corrupt Organizations' (RICO) claims against CMP, and determined that whether Sandra Merritt and other CMP journalists should be punished for “trespassing” at a Texas abortion facility was for a jury to decide.

Orrick also determined that CMP members could not be held liable for the independent acts of third parties who viewed the videos, but could be liable for “damages” directly related to the investigation itself.

“There are distinctions between which defendants are responsible for what acts, but there is no doubt that several defendants committed fraud, breached contracts, and trespassed at the conferences and in the Planned Parenthood facilities,” wrote Orrick (whose impartiality CMP has previously questioned due to his past board membership for San Francisco’s Good Samaritan Family Resource Center, which has partnered with Planned Parenthood, as well as his wife’s pro-abortion advocacy on social media).

“This ruling is seriously flawed, because as a matter of law Merritt and other investigators could not be liable for trespass, since they were invited onto the various properties by Planned Parenthood,” responded Liberty Counsel (LC), which is representing Merritt. LC founder and chairman Mat Staver called the lawsuit “nothing but an attempt to bully and silence the truth about its grisly abortion practice,” noting that the “Supreme Court has ruled that RICO cannot be used to silence free speech.”

“We have this pending motion to quash the original search warrant that led to the entire prosecution, so we expect that to be heard on September 3rd,” Daleiden told Breitbart on Tuesday. “There may be some big news about that next week. If the prelim goes forward, that’s going to mean that a lot of the witnesses from the undercover videos they are charging me with making (even though these are public conversations in public places), a lot of the abortion doctors and Planned Parenthood executives from those videos are going to be called to the witness stand, and they’re gonna have to testify live, under oath, in a public San Francisco court room. And they’re going to have to own and defend the statements they made on those video tapes about horrific crimes against women and children in the womb, sometimes children partially in the womb or out of the womb.”

LifeSiteNews has also reached out to the Center for Medical Progress, and will update this report upon reply.

“We are praying for the best but preparing for the worst,” responded Operation Rescue president Troy Newman, who is also a founding board member of CMP and faces potential liability if the jury sides with Planned Parenthood. “This is the most serious legal case I have ever faced – and I have faced many for my pro-life work over the years. I am grateful for my attorneys with the American Center for Law and Justice for their hard work on my behalf, and also for everyone who has supported and prayed for us.”

In addition to revealing Planned Parenthood’s fetal-parts harvesting, the videos show Planned Parenthood officials referencing multiple illegal practices, such as performing federally-prohibited partial-birth abortions, and altering abortion procedures in order to procure intact organs. They also show personnel discussing their practice with callous and shocking language, including admissions that their business is “killing,” complaints about how “difficult” it is to tear fetuses apart, and references to “heads that get stuck that we can’t get out.”

Calling the case a “travesty of justice,” Students for Life of America president Kristan Hawkins told LifeSiteNews that the “best thing we can do right now is continue to talk about the corruption that CMP revealed inside Planned Parenthood,” “call on the President to defund Planned Parenthood,” and “demand that the Department of Justice address the case sent to them in 2016 that looked into trafficking in human body parts harvested by Planned Parenthood, something we all saw on the CMP recordings.”

The trial on the RICO claims is slated to begin October 2.