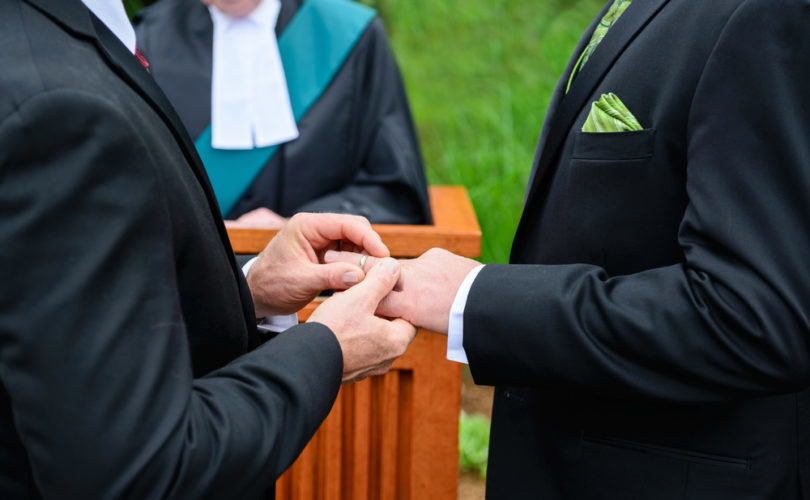 INDIANAPOLIS, IN – Thanks to the bevy of recent judicial decisions, the day will come when same-sex “marriage” is considered a norm rather than an anomaly, a federal judge ruled today as he struck down an Indiana law defining marriage as the union of one man and one woman.

“The court has never witnessed a phenomenon throughout the federal court system as is presented with this issue,” U.S. District Judge Richard Young, who was appointed by President Bill Clinton, said in his 36-page ruling. “In less than a year, every federal district court to consider the issue has reached the same conclusion. … Laws prohibiting the celebration and recognition of same-sex marriages are unconstitutional.” That unanimity made it “clear that the fundamental right to marry shall not be deprived to some individuals based solely on the person they choose to love.”

“The court has never witnessed a phenomenon throughout the federal court system as is presented with this issue.”

“In time, Americans will look at the marriage of couples such as Plaintiffs, and refer to it simply as a marriage – not a same-sex marriage,” he said.

Judge Young is undoubtedly correct that the nation's judges have been a driving force behind redefining marriage. In 19 of 28 states, same-sex “marriage” has been imposed by a judge's ruling, although such rulings are stayed in eight states. His decision came the same day a federal appeals court struck down Utah's marriage amendment.

In only three states – Washington, Maine, and Maryland – have the people directly approved gay “marriage” in a voter referendum.

But the people's will may be disregarded, Young said. Echoing Supreme Court Justice Anthony Kennedy, Young wrote “this law is motivated by animus, thus violating the Equal Protection Clause.”

His ruling conflicts with a 2003 ruling from Indiana Superior Court Judge S.K. Reid, who found that the law “promotes the state’s interest in encouraging procreation to occur in a context where both biological parents are present to raise the child.”

Judge Young vitiated the state's defense of traditional marriage based on, in his words, “the ability of the couple to naturally and unintentionally procreate,” because “the purpose of marriage – to keep the couple together for the sake of their children – is served by marriage regardless of the sexes of the spouses.”

In his view, “the right to marry is about the ability to form a partnership, hopefully lasting a lifetime, with that one special person of your choosing.”

Family Research Council (FRC) President Tony Perkins dismissed Young's ruling as “a further attempt by the courts to untether our public policies from the democratic process, as well as the anthropological record.”

Such rulings will only “incite a movement of indignant Americans, who are tired of seeing the foundations of a free and just society destroyed by a handful of black-robed tyrants.”

“The Left has long believed packing the federal courts with liberal jurists is the means of fulfilling a radical social agenda, as the American people refuse to endorse that agenda at the polls or through their elected representatives,” he said.

Before Young’s ruling, the state was in the process of seeking to pass a new constitutional marriage protection amendment.

This January, the state House of Representatives approved a motion allowing voters to decide the fate of the amendment at an upcoming referendum. Eleven Democrats joined the strong bipartisan majority, 57-40. At the time, State Rep. Matthew Pierce, a Bloomington Democrat, likened the pending referendum to stripping Jews of their rights on the eve of the Holocaust.

The bill passed the state Senate on February 17 by 32-17 vote. But due to discrepancies between the House and Senate version, the measure would not have gone before voters until after the 2014 elections.

“As we saw with Roe v. Wade in 1973 – despite the Left's earnest hopes, the courts do not have the final say,” he said. “The American people will have the final word as they experience the consequences of marriage redefinition and the ways in which it fundamentally alters America's moral, cultural and political landscape.”