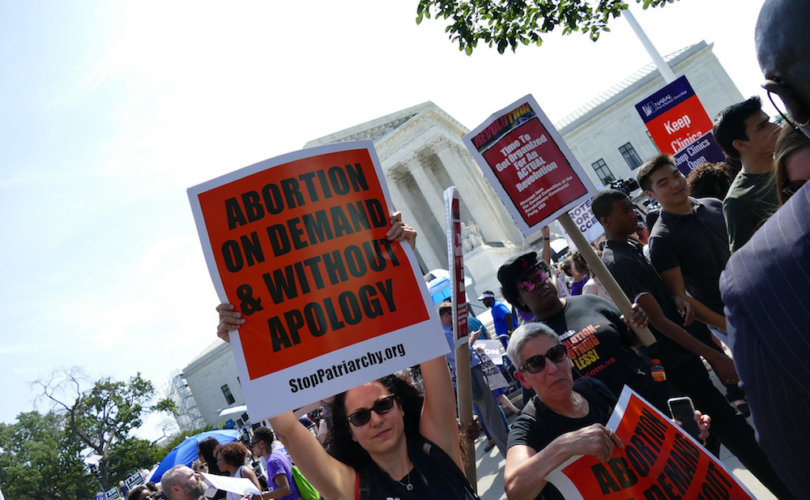 Federal District Judge Lee Yeakel ruled Wednesday the bill was unconstitutional, and would put an “undue burden” on women.

“The State’s valid interest in promoting respect for the life of the unborn, although legitimate, is not sufficient to justify such a substantial obstacle to the constitutionally protected right of a woman to terminate a pregnancy before fetal viability,” wrote Yeakel.

Senate Bill 8 criminalizes dismembering a live child in utero. Texas Governor Greg Abbott signed Senate Bill 8 into law in June, and it was to go into effect September 1.

But Yeakel issued a temporary restraining order August 30 blocking implementation of the bill after the Center for Reproductive Rights and Planned Parenthood filed a lawsuit on behalf of several abortion facilities challenging the statute.

Yeakel’s ruling quashing the law came just as his restraining order was set to expire Wednesday.

Texas Attorney General Ken Paxton has already appealed to the Fifth Circuit Court of Appeals, according to a Texas Alliance For Life (TAL) press release.

“U.S. Supreme Court precedent does not allow states to protect non-viable unborn babies from abortion, even when the methods entails dismembering the baby during the abortion. Most people find abortion by this method to be abhorrent,” Pojman said.

“This court’s decision shows how out of step that precedent is with common human decency.”

During a five-day trial ending November 8, state lawyers argued it was reasonable to require “fetal demise” before the baby is torn limb from limb in utero, according to Notre Dame professor Margaret Cleveland in a Washington Examiner commentary on the trial.

She quoted Mark Rylander, director of communications for the attorney-general’s office, in describing the law’s intention at the outset of the trial: “Innocent unborn children should at least have the same rights in Texas as prisoners being executed for the most heinous crimes and even animals — who would never be torn apart alive.”

“While the direct termination of the life of an unborn child is always contrary to the fundamental and inherent right to life for every human being, until Roe v. Wade is overturned, it is all but impossible from a legal perspective to unconditionally protect the right to life for the unborn,” noted Population Research Institute’s Jonathan Abbamonte in an analysis of the Texas bill.

“The state of Texas has maintained that the state has an interest in ‘promot(ing) respect for the dignity of the life of the unborn’ by ensuring that, at the very least, the unborn child is not submitted to cruel and inhumane dismemberment procedures.”

“The Texas legislature overwhelmingly voted to protect pregnant mothers and their unborn children from being subject to such a dehumanizing experience,” Carol Tobias, president of National Right to Life said in response to the ruling.

“Releasing the decision on the eve of a national holiday in the hopes that no one will notice is an act of cowardice. Rest assured, the right-to-life movement takes notice. We are confident that the Texas attorney general will appeal Judge Yeakel’s cruel decision to the Fifth Circuit Court of Appeals and it will be overturned.”

Media reports on the ruling generally refer to live dismemberment abortions as does Center for Reproductive Rights, that is, the “most common type of second-trimester abortions,” as in this Reuters story, or as reported in KUT, Austin’s NPR station.

But dismemberment abortion, or dilation and evacuation, is “one of the most brutal abortion procedures legally permitted in the United States,” writes Abbamonte.

“The procedure involves tearing apart the unborn child limb by limb, causing the child to bleed to death. The baby is removed in pieces from the uterus using forceps or vacuum aspiration. Afterwards, the woman’s uterus is scraped with a long metal curette to remove any remnants of the baby or the placenta left in the womb.”

Federal court judges have struck down these bans in Alabama, Kansas, Louisiana, and Oklahoma.

Others provisions of Texas Senate Bill 8 “remain in effect,” according to Texas Alliance for Life. These include a “ban on partial-birth abortion, the sale or donation of tissues and organs obtained after abortion, and research on those tissues and organs.”