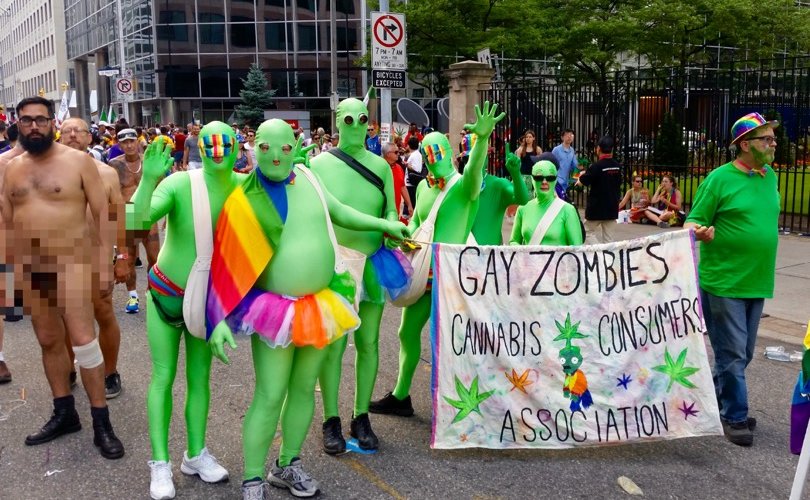 Whatcott with his "Green Zombies" at the 2016 Toronto Pride Parade.

ONTARIO, March 29, 2017 (LifeSiteNews) — An Ontario judge has thrown out a $104 million class-action lawsuit against a Christian group that was sued by homosexual activists for defamation.

Homosexual activists argued that Toronto Pride Parade participants were defamed last year when the group, led by Christian activist Bill Whatcott, infiltrated the parade dressed as green “gay zombies” and handed out what looked to be free condoms that were really packets with information about the physical and spiritual dangers of homosexual practices.

But Justice Paul Perell dismissed the case on a technicality, ruling in Hudspeth v. Whatcott that the homosexual activists George Smitherman and Christopher Hudspeth could not claim defamation of an entire group, such as the Pride Parade participants or the “LGTBTQ2SI Community,” but only of individuals.

“The civil law, generally speaking, is concerned with the civil rights of individuals,” he wrote in his March 20 judgment. “The doctrinal problem [with the lawsuit] is there is no common law cause of action by a community for defamation, intentional infliction of mental distress, and civil conspiracy to injure.”

The judge ruled, however, that the homosexual activists could continue the case if they were able to produce individuals claiming to be defamed, injured, or inflicted by mental distress by Whatcott’s info packets. The judge gave the plaintiffs 30 days (April 19) to produce the individuals, after which point if they have not, the case must be “immediately dismissed.”

In a surprise move, the judge also ordered Whatcott to deliver the names of a half a dozen anonymous “zombies” who helped hand out the info packets as well as the “unidentified financial backers” who funded the group’s expenses.

The judge argued that knowing the identities of the individuals who helped Whatcott was “necessary” to the homosexual activists if they decide to go ahead with further legal action.

But Whatcott said he would rather go to jail than hand over the names of his friends and supporters to homosexual activists who have publicly promised to “punish them” with a multimillion dollar lawsuit.

“There could be serious repercussions for me, including prolonged jail time if I don't comply with the order to disclose the names of my supporters,” wrote Whatcott on his blog.

“Generally, Christians should comply with secular courts, but not when complying harms the innocent or when the order is unjust in the eyes of God.”

“I don't actually want to be put in jail indefinitely for contempt, or have to spend the rest of my life making it as difficult as possible to prevent these hate-filled homosexuals from taking my property or somehow getting access to who my friends and supporters are and then going after their homes and life savings.”

The judge also ruled that, in his belief, Whatcott’s info packets were “hate speech” and therefore his actions at the parade could not be protected as a “legitimate exercise of freedom of expression.”

In 2013, the Supreme Court of Canada found Whatcott guilty of “hate speech” against homosexuals for pamphlets in which he warned that “children will pay the price in disease, death, abuse and ultimately eternal judgment if we do not say no to the sodomite desire to socialize your children into accepting something that is clearly wrong.”

Whatcott’s lawyers are leaning toward appealing the decision, according to Whatcott’s blog.