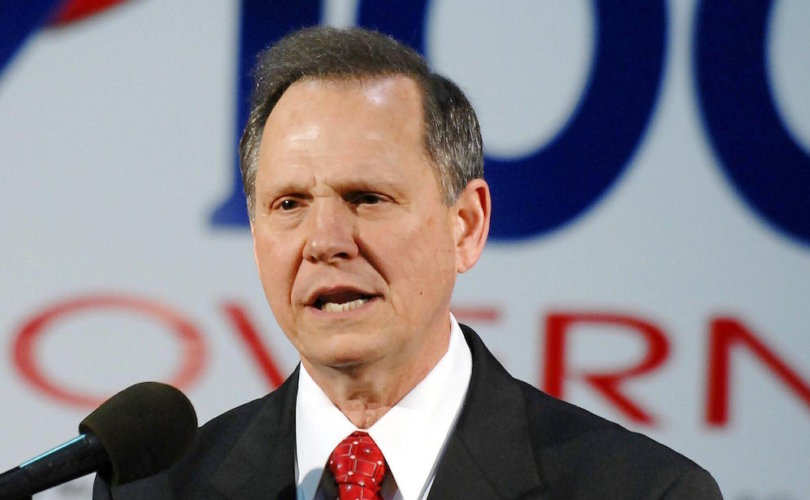 MONTGOMERY, Alabama, September 30, 2016 (LifeSiteNews) – Pro-marriage and family conservative stalwart Judge Roy Moore was suspended Friday for the rest of his term after he opposed a federal court order on same-sex “marriage.”

Alabama's nine-member Court of the Judiciary ruled unanimously in favor of suspending Moore because of “his disregard for binding federal law” while refusing to marry same-sex couples. His term was to expire in 2019. The 69-year-old judge was not removed from the bench entirely, but he will be unable to seek the position again because of age limits.

The SPLC raised numerous complaints against the chief justice, and in response the Judicial Inquiry Commission (JIC) filed six charges, including disregarding a federal injunction forcing same-sex “marriage” in Alabama; “unwillingness to follow clear law;”  “abuse” of administrative authority; substituting his judgment for the judgment of the Alabama Supreme Court; making public comments about a pending proceeding in his own court and then not recusing himself; and “interference with the legal process.”

Moore was accused of telling probate judges to violate federal court rulings, but his January directive stated: “I am not at liberty to provide any guidance to the Alabama probate judges on the effect of Obergefell on the existing orders of the Alabama Supreme Court. That issue remains before the entire Court which continues to deliberate on the matter.”

Judge Moore was represented by Liberty Counsel, which is dedicated to “advancing religious freedom, the sanctity of life, and the family.” Founder and Chairman Mat Staver told Christian News Wire this week after his trial that Moore “merely gave a status report on the pending case” before the state Supreme Court.

“The JIC apparently wanted Chief Justice Moore to usurp the authority of the Alabama Supreme Court and order all probate judges to issue marriage licenses to same-sex couples,” Staver said. “The JIC overstepped its authority to bring these politically-motivated charges.”

“The underlying issue in this case concerns the nature of the federal system and the relationship between the federal and state courts,” John Eidsmoe, senior counsel for the Foundation for Moral Law, told LifeSiteNews. “This is an issue Americans struggled with well before the Constitutional Convention and continue to struggle with today.”

“The way to resolve this issue is through scholarship, debate, argumentation, litigation, and the political process,” Eidsmoe reasoned.

“Unfortunately, the Left wants to short-circuit that process and silence all opposing views by removing dissenting judges from office,” Colonel Eidsmoe continued. “That's not the American way of doing things..”

This was Moore's second suspension. In 2003, he refused to remove a monument of the Ten Commandments at the Alabama Judicial Building despite orders to do so from a federal judge and was removed from his position as chief justice.

After his 2003 suspension, Moore unsuccessfully sought political office, losing in the Republican gubernatorial primaries. He then won back the office of Alabama chief justice in 2012.