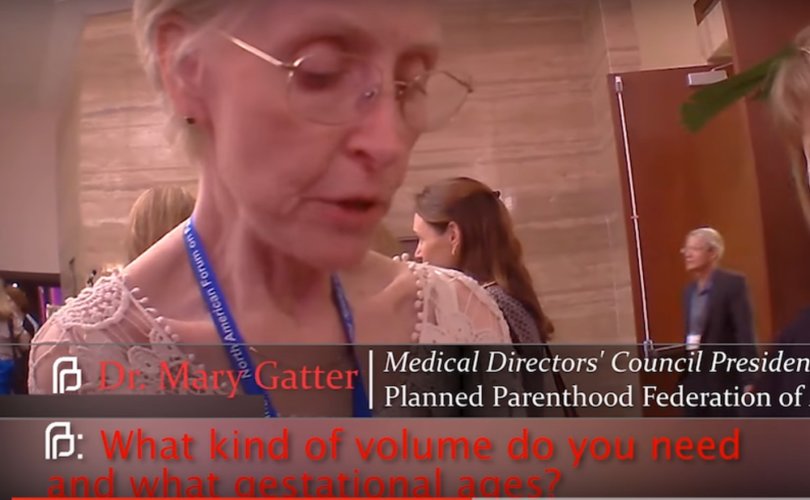 SAN FRANCISCO, California, February 9, 2019 (LifeSiteNews) – A California judge will decide on Monday if the 14 “secret” pro-abortion “Does” named as accusers in 15 criminal charges brought against pro-life advocate David Daleiden in 2017 will be revealed.

Judge Christopher C. Hite of the Superior Court of California in San Francisco heard arguments January 28 from Daleiden’s legal team for why Daleiden’s accusers should be named.

Daleiden, 30, is the undercover journalist and director of the Center for Medical Progress (CMP) who in 2015 released grisly videos (watch here) allegedly exposing Planned Parenthood’s illegal harvesting and sale for profit of body parts from aborted babies.

Public outrage over the videos prompted congressional hearings and calls for the federal defunding of Planned Parenthood. Because of the damning evidence found in those videos, the CMP director now finds himself under attack by the abortion industry. The abortion industry is seeking to permanently bury the videos and put Daleiden and his co-defendant Sandra Merritt behind bars on charges that they illegally recorded “confidential communications” under California’s anti-eavesdropping law.

The 14 individuals Daleiden captured in the videos as giving damning evidence of the abortion industry’s involvement in the sale of aborted baby body parts were named in the felony charges against the whistleblower anonymously, being listed in People of the State of California vs. David Robert Daleiden, Sandra Merritt as “Does” 1 through 14.

While Daleiden and Merritt’s legal teams cannot use the names in court, and must refer to “Doe” 1 or “Doe” 14, etc., the names have been publicly available on the internet since 2017 and can be easily found through online searches. Many of these names have become infamous names in pro-life communities across America.

Daleiden and Merritt’s legal teams — which includes Thomas More Society, Law Office of Nic Cocis, Liberty Counsel, and Law Office of Brentford Ferreira — argued before Judge Hite last week that the Does should be named in court because a publicly-accused defendant is entitled to face his accusers in a public trial.

They said that the 14 “Does” have “information and testimony” as to whether or not the recorded conversations were confidential. They would also like the names revealed in court for the purposes of subpoenaing the “Does” to testify in the case. They also raised the argument that if a “Doe” were subpoenaed, it would be questionable for a witness to “testify at a public hearing without using their given name.” They also noted existing law that indicates that in cases like this “you can’t keep the victims’ names secret.”

“David & Sandra's attorneys should be allowed to give a robust defense for their clients, including unsealed, public cross-examination,” commented Pro-Life San Francisco in a Feb. 1 tweet about the proceedings. The pro-life group has been tweeting out the names of the “Does” since last month and linking to mainstream media outlets which have covered their involvement in the abortion industry.

The Monday, February 11 hearing is essential because it sets the parameters for the upcoming Feb. 19 preliminary hearing to determine if any of the 15 criminal charges against Daleiden and Merritt have sufficient grounds to proceed to an actual trial. In other words, the judge will decide on Monday what rules will govern the preliminary hearing.

Along with the judge determining if the accusers’ identities will be revealed, he will also determine if Planned Parenthood and the National Abortion Federation can intervene in the case.

“In the criminal context, you are guaranteed as a defendant a neutral and disinterested prosecutor. And so, to allow private parties to come in and prosecute you when you're very liberty is at risk, it puts every notion of constitutional due process on its head,” he said in an interview with LifeSiteNews.

The judge will also decide on Monday if the undercover videos filmed by Daleiden can be used as evidence, and if so, to what extent they will be accessible to the public. While the “Does” legal team wants the videos “sealed” so they cannot be viewed by a public likely to be outraged by the content, Daleiden and Merritt’s team want the videos shown because they are the most important piece of evidence exposing the abortion industry’s allegedly illegal activity.

U.S. District Judge William Orrick banned the videos in 2017, placing a civil injunction on them that prevented Daleiden’s CMP along with his legal team from releasing more footage. The judge ruled that Daleiden and his legal team were in contempt of court in July 2017 for ignoring his gag order and fined them $137,000.

The Superior Court judge suggested last week, however, that Orrick’s civil gag rule did not apply in a criminal court, indicating that Daleiden and Merritt’s team might use the videos for their case.

“It will not be a violation of the federal civil injunction if I order that you may use certain clips in this case because…that’s part of your defense in this criminal proceeding,” Judge Hite said. He added that Judge Orrick himself could not make a civil injunction “bind” a criminal court and that Orrick “doesn’t have any jurisdiction over this case.”

One of Daleiden’s lawyers argued in court last week that he was confident that a jury would not “indict my client after they see these videos,” indicating their importance in the case and the reason the lawyers defending the “Does” want them banned as evidence.

“You could have a very secret and very restricted preliminary hearing starting on Feb. 19th if the hearing goes badly this Monday,” Breen told LifeSiteNews. “This hearing on Monday is incredibly important for the pro-life movement, for the future of the Daleiden cases, and frankly for free press,” he added.

The defense is worried that if Judge Hite orders what amounts to a secret preliminary hearing then he could also order a secret trial, which could only benefit the abortion industry.

“We want everything in the open,” said Thomas Brejcha, President and Chief Counsel for Thomas More Society, to LifeSiteNews.

Daleiden said last month at the March for Life Conference in Washington D.C. that he can understand why Planned Parenthood is unwilling to produce witnesses, the “Does,”  in its case against him.

“And I can promise you…when this all starts on February 19 the leaders and architects of Planned Parenthood’s abortion empire will either admit their criminality under oath or they will commit perjury trying to cover it up,” he said.

STAY TUNED: LifeSiteNews will be at the Superior Court Monday in San Francisco following this case. Stay tuned for how Judge Hite rules in this hearing.