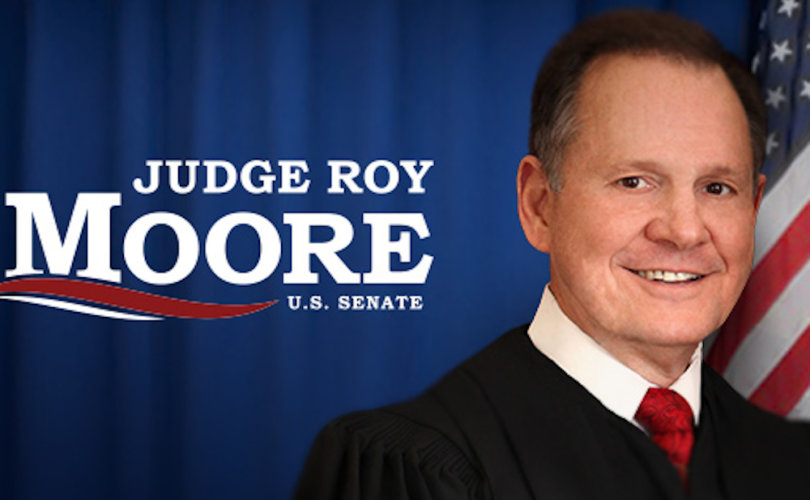 The outspoken Christian is pro-life and opposes “socialized medicine” in general and the Obama Health and Human Services abortion coverage mandate in particular. But he is most famous for his public stand against homosexual “marriage.”

“The foundations of the fabric of our country are being shaken tremendously,” Moore said at a press conference. “Our families are being crippled by divorce and abortion. Our sacred institution of marriage has been destroyed by the Supreme Court, and our rights and liberties are in jeopardy.”

When Sessions joined President Trump's cabinet, his senate seat was given to former state attorney general Luther Strange, who has thrown his hat into the primary. Others vying for the position include state Rep. Ed Henry, R-Hartselle, and the Christian Coalition of Alabama's Randy Brinson.

“As United States senator, I will continue to stand for the rights and liberties not only of (the people of) this state but of (the) people (of this nation) as well … so help me God,” Moore pledged.

Last year, Moore's service as the state Supreme Court Chief Justice was suspended because he advised probate judges to follow state law banning homosexual “marriage” while his court reviewed the conflict with the U.S. Supreme Court's Obergefell decision. Immediately, the Southern Poverty Law Center, the Human Rights Campaign, and other liberal groups began an intense campaign against him.

Moore countered that he was only clearing up confusion among probate judges over conflicting state and federal orders.

More than a decade ago, Moore opined, “The homosexual conduct of a parent” is “sufficient justification for denying that parent custody of his or her own children or prohibiting the adoption of the children of others.”

In 2003, Moore refused to remove a monument of the Ten Commandments at the Alabama Judicial Building despite orders to do so from a federal judge and was removed as Chief Justice.

After his removal, Moore sought political office but lost in the Republican 2006 and 2010 gubernatorial primaries. He then was elected back into the office of Alabama Chief Justice in 2012.

Gov. Kay Ivey has set the date of the Republican primary for August 15.  Whoever is chosen by registered Republicans will face a Democratic challenger on December 12.