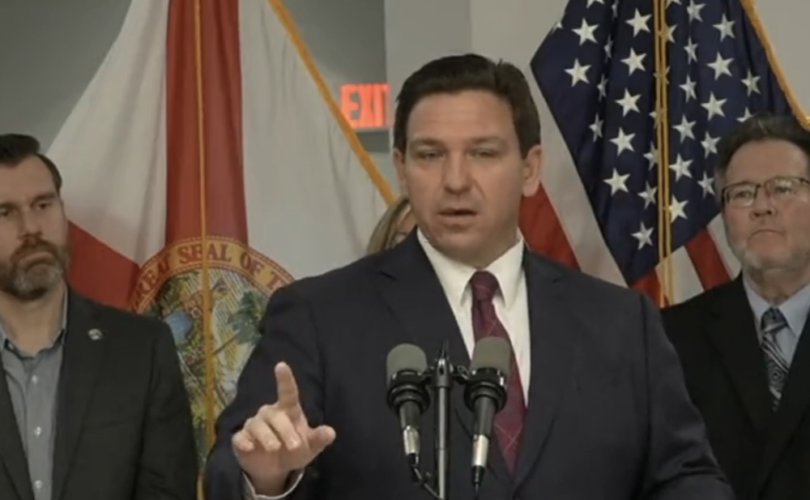 (LifeSiteNews) – A federal judge once again upheld Florida Republican Gov. Ron DeSantis’ suspension of a prosecutor who publicly declared he would not enforce state pro-life laws.

However, U.S. District Judge Robert Hinkle stated that the conservative governor had violated the left-wing prosecutor’s free speech rights in doing so.

Last August, DeSantis announced he was suspending Warren “for neglecting his duties as he pledges not to uphold the laws of the state” in response to Warren declaring he would not prosecute violations of Florida’s 15-week abortion ban. Warren claimed it “violate[s] … the right to privacy” despite the U.S. Supreme Court expressly affirming the legitimacy of state abortion bans when it overturned Roe v. Wade.

Warren challenged the governor’s decision, attempting to paint himself as a target of political persecution and arguing DeSantis had violated his First Amendment right to free speech. He sought from the courts a preliminary injunction against his suspension, but in September U.S. District Judge Robert Hinkle opted to let the suspension stand until resolving the case on the merits. “Mr. Warren had no First Amendment right, as a public official, to declare that he would not perform his duties under Florida law,” Florida Solicitor General Henry Whitaker argued at the time.

On Friday, Hinkle issued his ruling, which maintained that DeSantis was punishing Warren for his political views, but the Constitution tied his hands from doing anything about it.

“The record includes not a hint of misconduct by Mr. Warren,” Hinkle claimed. “So far as this record reflects, he was diligently and competently performing the job he was elected to perform, very much in the way he told voters he would perform it. He had no blanket nonprosecution policies. Any minimally competent inquiry would have confirmed this. The assertion that Mr. Warren neglected his duty or was incompetent is incorrect. This factual issue is not close.”

Warren had publicly declared that he considered enforcing abortion bans “something that prosecutors should not be doing” and signed a joint statement that he would “prosecute only those cases that serve” his conception of “the interest of justice and the people.”

Under the Florida Constitution, the final decision whether to permanently fire or reinstate Warren rests with the Republican-controlled Florida Senate, which is expected to side with DeSantis.

The battle is just one of the ways DeSantis has made combating the Left a cornerstone of his governorship, building a proactive conservative record that has contributed to his popularity as a potential contender for the GOP’s 2024 presidential nomination. Some pro-lifers and supporters of former President Donald Trump have decried Florida’s 15-week abortion ban as insufficiently aggressive; DeSantis’s office has pledged that further pro-life action is coming this year.

READ: DeSantis thanks March for Life attendees for ‘being a voice for the voiceless’