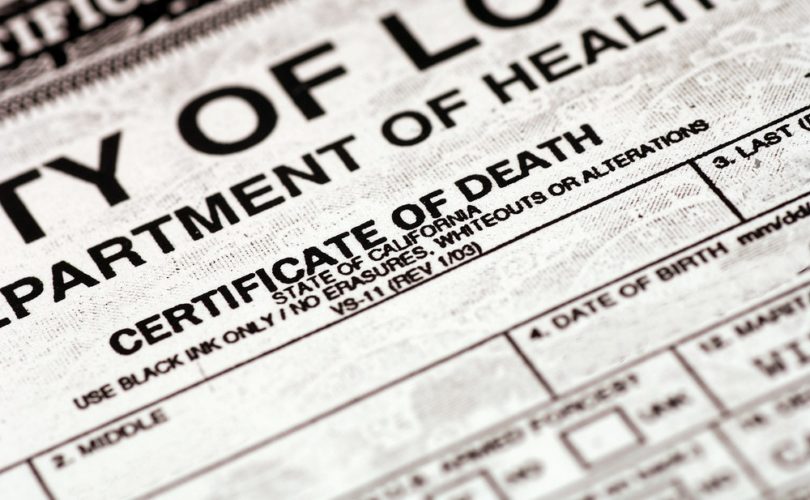 Two federal judges have ordered Arizona and Indiana to recognize same-sex “marriages” on death certificates, although both states have laws defining marriage as a union between one man and one woman.

In Arizona, Judge John Sedwick ordered the state to issue a death certificate for George Martinez listing his marital status as “married” and his spouse as Fred McQuire.  The two were “married” in California in July, and Martinez died in September.  They had previously sued Arizona to recognize their out-of-state “marriage” as legal – a case that is still ongoing.

In his decision, Sedwick said that the majority of federal appeals courts have found that “marriage laws which discriminate between heterosexual couples and homosexual couples infringe a fundamental right.”  He said he thought it was likely that Arizona’s marriage protection law will soon be overturned.

Sedwick’s decision applies exclusively to Martinez and McQuire.   The judge explained that given the likelihood of same-sex “marriage” becoming legal in Arizona, he didn’t want McQuire’s “marriage” to be excluded from recognition just because his “husband” died before the law could be overturned.  He said he hoped the decision would prevent “the loss of dignity and status coming in the midst of an elderly man’s personal grief.”

Meanwhile, in Indiana, Judge Joseph Van Bokkelen presided over an agreement between the state and a lesbian couple, Veronica Romero and Mayra Yvette Rivera, who “married” in Illinois in March. The state agreed to recognize the couple’s “marriage” because Rivera is dying of ovarian cancer, and said they will issue a death certificate bearing Romero’s name as “spouse” when Rivera passes away.

Indiana opted to concede the case mostly due to its striking similarities to an earlier case the state lost, in which Judge Richard L. Young ordered Indiana to recognize the “marriage” of Niki Quasney and Amy Sandler, who “wed” in Massachusetts in 2013.  Quasney also has terminal ovarian cancer, and the couple had argued that Sandler and her two children would suffer irreparable financial harm if the state does not recognize their “marriage” so that Sandler can collect death benefits when Quasney passes away.

Both Indiana decisions apply only to the couples named specifically by the court; however, last week, a federal appeals court upheld an earlier ruling by Judge Young declaring the state’s marriage protection law unconstitutional.

The state of Indiana has appealed that ruling to the U.S. Supreme Court.