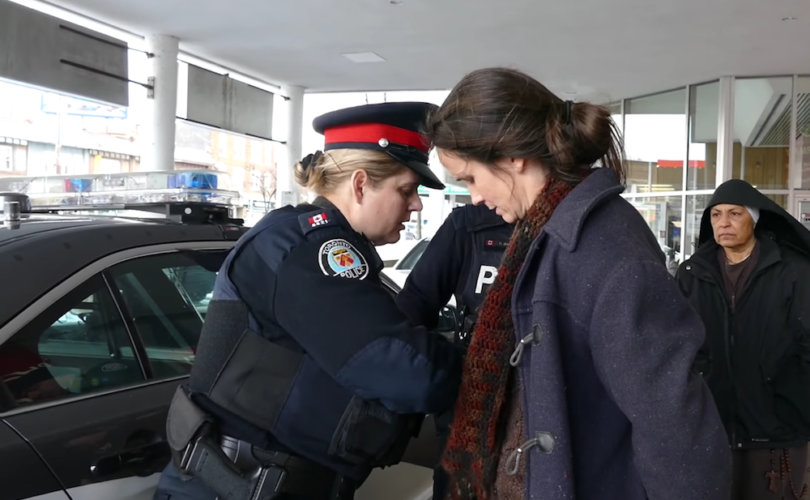 TORONTO, December 22, 2017 (LifeSiteNews) — Pro-life prisoner of conscience Mary Wagner will spend Christmas in jail after an Ontario judge imposed a bail condition that she stay away from all abortion centers in the province.

At a bail hearing at College Park courthouse Friday morning, Wagner asked to be released on her own recognizance, on the sole condition she return for her trial.

“I would like to be released from custody,” she told Justice Howard Chisvin of the Ontario Court of Justice. “I tried to stand up for unborn children — ”

“Ms. Wagner, we’re not going to get into that,” the judge interrupted.

Wagner, 43, was arrested December 8 at Women’s Care Clinic, after she and a friend entered the abortion center with red roses and attempted to persuade women to choose life for their unborn children.

The abortion facility is located on the fifth floor of a medical building at 960 Lawrence Avenue West in Toronto.

Wagner was charged with mischief and two counts of breach of probation and has remained in custody since her arrest because she refused to agree to stay away from abortion centers.

After a preliminary court appearance by video on December 21 from Vanier jail, Wagner was scheduled for a further bail hearing December 22.

Counsel for the Crown told the court Wagner had previously been convicted of “harassment” and that the abortion center is protected by provincial legislation.

Wagner stated she was never convicted of harassment.

Moreover, the law establishing “bubble zones” of 50 to 150 meters around the province’s eight abortion centers in which pro-life witness is banned only comes into effect February 1.

The Crown counsel asked for bail to be set at $500 and with the condition Wagner agree to stay away from the Women’s Care Clinic and all abortion centers in the Ontario.

Chisvin agreed, noting the conditions “mimic” conditions of two probation orders Wagner is under as a result of previous convictions.

Wagner said she was prepared only to promise to appear in court for her trial.

She asked why the bail order needed to “mimic” conditions already in her probation orders.

The bail conditions were “reasonable,” given the allegations against her, Chisvin replied.

“It’s absolutely your decision. Bail is set. If you choose to sign it you can go … You can choose to do what you want to do.”

Wagner said she was not going to change her mind.

Linda Gibbons, who has spent 11 years in jail for her pro-life witness outside Toronto abortion centers, also routinely refused to sign conditions requiring her to stay away from abortion centers.

Wagner will remain in custody until her trial.

A devout Catholic, Wagner has spent four years, eight months and counting behind bars for her peaceful and prayerful attempts to rescue women and unborn babies from the violence of abortion.

“I don’t think I could continue this path and I don’t know if I would have even begun it, without the gift of faith and the grace that God, many graces, grace upon grace, that He has given me,” she told LifeSiteNews in an earlier interview.

In a letter from jail to her supporters, Wagner wrote that she attended Mass in the morning of the day she was arrested, the Solemnity of the Immaculate Conception of the Virgin Mary.

“On my left was killing place, and to my right, the church where we pray and where Jesus is sheltered,” she wrote.

“Outside, the life sized creche, awaiting the Christ Child — the symbol of the Word made Flesh, who dwells among us in the church and in the littlest of human beings,” she wrote.

“Let us pray that all God’s children would understand that our primary duty is to Our Master. We are his servants. Let us not be found in neglect of our duty to Him. Lord lead us to repentance.”

Wagner’s next court appearance is scheduled for January 4 at 1000 Finch, via video from Vanier jail.