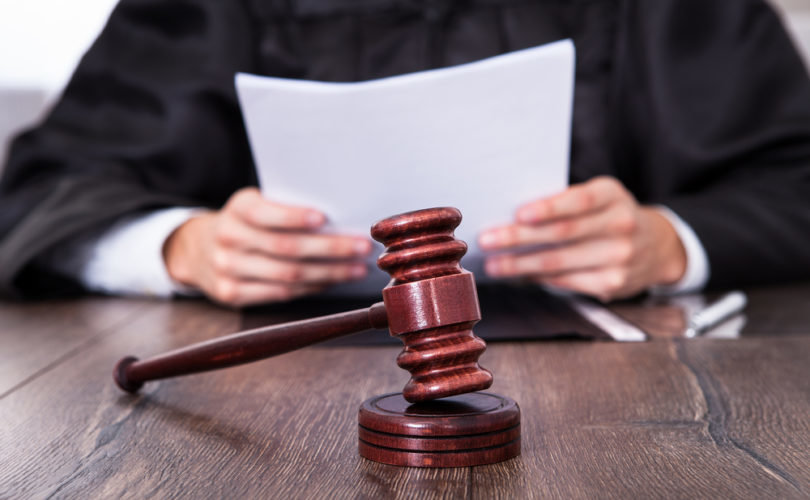 Friday was a rough day for supporters of true marriage in Arizona, Alaska, and Wyoming, as all three states saw their marriage protection laws struck down by activist judges in the wake of the Supreme Court’s refusal to review similar decisions by federal courts around the country.

In Arizona, U.S. District Judge John Sedwick ruled that the state’s marriage protection law violated the equal protection clause of the U.S. Constitution by defining marriage as a union exclusively between a man and a woman, and excluding homosexual couples.

While state Attorney General Tom Horne said he personally disagreed with the ruling, he said any attempt at appeal would be a dead end, since the liberal Ninth Circuit Court of Appeals has already ruled in favor of legalizing same-sex “marriage,” and the Supreme Court has repeatedly refused to review similar decisions.

But Governor Jan Brewer slammed Judge Sedwick for his decision, saying, “It is not only disappointing, but also deeply troubling, that unelected federal judges can dictate the laws of individual states, create rights based on their personal policy preferences, and supplant the will of the people in an area traditionally left to the states for more than 200 years.”

Arizona’s constitutional amendment upholding natural marriage had been in place since 2008, and was approved by more than 56 percent of voters. Because of Sedwick’s ruling, however, the state began issuing marriage licenses to same-sex couples on Friday.

Republican State Senator Michele Reagan, who is running for Secretary of State, celebrated the decision in a press release, saying, that the ruling “should be a proud day for Arizona as we celebrate equality.” She also said that because of the state’s previous defense of true marriage, “We need to repair our image and reputation.” But Democrats in the state were quick to point out Reagan had previously voted in favor of the state’s gay “marriage” ban and in favor of a religious protection bill allowing business owners to opt out of participation in same-sex “weddings” if they believe their faith demands it.

“The issue presented in this case is of overriding national importance,” Alaska argued. Since last year's Supreme Court ruling overturning key portions of the federal Defense of Marriage Act (DOMA), “the urgency of the issue has grown by orders of magnitude.”

But as in other cases where states have asked the high court to intervene and make a final call on the legality of marriage protection laws, the Supreme Court refused to review the Ninth Circuit’s decision. The court is not expected to agree to review the issue until at least one federal appeals court issues a contradictory ruling upholding the legality of same-sex marriage bans – something that has yet to happen.

Alaska’s ban on same-sex marriage, passed in 1998, had been the longest-standing in the nation. Due to a state holiday, Alaska put off issuing marriage licenses until Monday. Meanwhile, Governor Sean Parnell vowed to continue his efforts to appeal the ruling.

“In 1998, Alaska voters passed a constitutional amendment defining marriage as being between one man and one woman,” said spokeswoman Sharon Leighow. “When they did that, it became part of the Alaska Constitution, which Gov. Parnell has sworn to uphold. [Friday’s] denial of the stay doesn’t change that and the State will continue with this appeal to the Ninth Circuit. … The State will be filing its request for en banc review next week.”

American Civil Liberties Union (ACLU) Alaska executive director expressed his surprise that Parnell planned to continue the fight for marriage protection in the state. “I'm surprised Parnell has not chosen to listen to the wisdom of fellow governors, all of whom may disagree with the court's decision but have said 'the courts have spoken, this is what the law is,’” Decker told the Alaska Dispatch News.

“The preferred forum for addressing the issues presented by Plaintiffs in this case is the arena of public debate and legislative action. However, that ship has sailed,” Skavdahl wrote. “It is not the desire or preference of this Court to, with the stroke of a pen, erase a State’s legislative enactments. Nonetheless, the binding precedent of [the Tenth Circuit’s decisions] mandate this result, and this Court will adhere to its Constitutional duties and abide by the rule of law.”

Skavdahl immediately stayed his own ruling to give Wyoming state officials a chance to appeal, but at the same time, he said if the state issues paperwork indicating they plan to drop the case, the stay will be lifted immediately.

Wyoming Attorney General Peter Michael announced Monday that the state intends to do just that. He said in a press release that Wyoming will notify the court at 10 a.m. Tuesday that the state will no longer move forward with its appeal.

Wyoming had banned same-sex “marriage” by statute since 1977, and passed even stronger legislation in 2003, defining marriage explicitly as a union between one man and one woman. The state now plans to begin issuing marriage licenses to homosexual couples as soon as it formally drops its appeal Tuesday morning.

Friday’s court rulings bring the total number of states allowing legal same-sex “marriage” to 32. Out of those, 20 were the result of state or federal courts overturning state law.