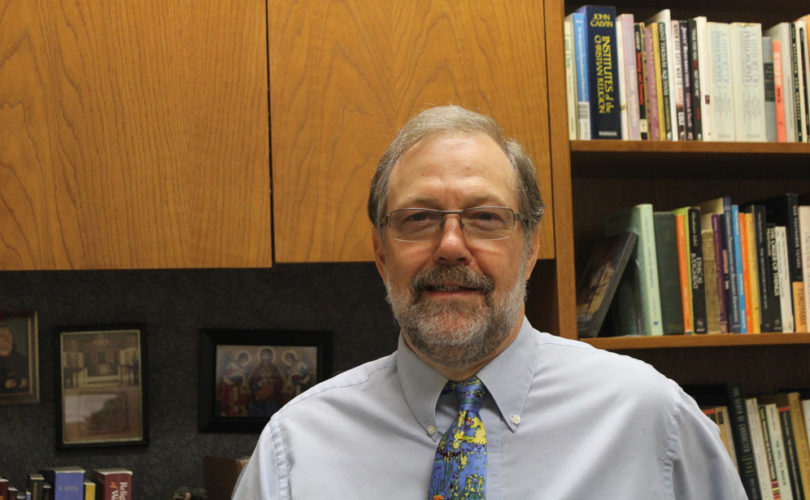 Dr. Nicholas Meriwether has taught courses in philosophy, religion, ethics, and the History of Christian Thought at Shawnee State University in Ohio for 25 years.Alliance Defending Freedom

CINCINNATI, Ohio, March 30, 2021 (LifeSiteNews) — A U.S. Court of Appeals ruled in favor of a Christian philosophy professor after the university where he teaches  punished him for resisting a male student’s demand to be referred to as a woman, insisting that he be addressed with feminine titles and pronouns.

The 6th Circuit ruled Friday that Shawnee State University had violated Dr. Nicholas Meriwether’s First Amendment rights. Meriwether has taught courses in philosophy, religion, ethics, and the History of Christian Thought at the university for 25 years.

In 2018, Meriwether had called a student “Sir.” The student told Meriwether that he identified as a woman and wanted to be addressed accordingly. The professor declined the student’s request, triggering an investigation by the school administration that eventually concluded Meriwether had created a “hostile environment.”

Meriwether was issued a written warning for violating the school’s nondiscrimination policy and was informed that he could be fired or suspended without pay.

“This case forced us to defend what used to be a common belief — that nobody should be forced to contradict their core beliefs just to keep their job,” said Alliance Defending Freedom (ADF) senior counsel and vice president of appellate advocacy John Bursch, who represented Meriwether against the university, in a statement.

“We are very pleased that the 6th Circuit affirmed the constitutional right of public university professors to speak and lead discussions, even on hotly contested issues,” continued Bursch. “The freedoms of speech and religion must be vigorously protected if universities are to remain places where ideas can be debated and learning can take place.”

“Traditionally, American universities have been beacons of intellectual diversity and academic freedom,” the 6th Circuit explained in its opinion. “They have prided themselves on being forums where controversial ideas are discussed and debated. And they have tried not to stifle debate by picking sides. But Shawnee State chose a different route: It punished a professor for his speech on a hotly contested issue. And it did so despite the constitutional protections afforded by the First Amendment. The district court dismissed the professor’s free-speech and free-exercise claims. We see things differently and reverse.”

Meriwether “strives to live out his faith each day,” and “his religious convictions influence how he thinks about human nature, marriage, gender, sexuality, morality, politics, and social issues,” said the court in its opinion.

He believes that “God created human beings as either male or female, that this sex is fixed in each person from the moment of conception, and that it cannot be changed, regardless of an individual’s feelings or desires,” continued the court.

Liberal academia and LGBT activists ‘stunned’ at the court’s decision

“Trump judge rules professor has constitutional right to degrade trans students during class,” blared an LGBTQ Nation headline. The media outlet went on to refer to the ruling as a “stunning decision” and “an over-the-top opinion” and called the ADF a “hate group” that “has been behind many recent lawsuits for religious exemptions, including Masterpiece Cakeshop and Hobby Lobby.”

“A university president could require a pacifist to declare that war is just, a civil rights icon to condemn the Freedom Riders, a believer to deny the existence of God, or a Soviet émigré to address his students as ‘comrades,’” wrote Trump-appointed judge Amul Thapar, who is Catholic. “That cannot be.”

The Sixth Circuit “is being invited to invalidate the entire field of hostile environment harassment law,” opined Koppelman in a commentary for The Hill. “Teachers at public colleges will have a constitutional right to subject their students to bigoted slurs.”

“All this is pretty silly stuff,” mused Koppelman, author of “Gay Rights vs. Religious Liberty? The Unnecessary Conflict.”

Professor Meriwether’s “arguments are so extravagant that they shouldn’t be worthy of notice,” asserted Koppelman.

A previous version of this article referred to Dr. Nicholas Meriwether as a Catholic. He is in fact an evangelical Christian. LifeSiteNews regrets this error.