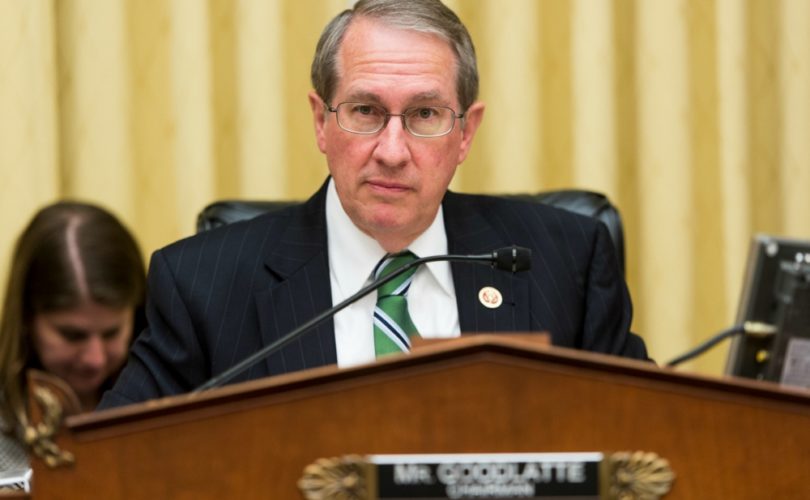 WASHINGTON, D.C., September 9, 2015 (LifeSiteNews) — The chairman of a congressional committee investigating Planned Parenthood says the reason he's targeting the abortion giant, and not the pro-life activists behind the videos, is quite simple – it's his job to keep tabs on how “huge amounts” of federal dollars are being spent.

In his opening statement at today's hearing on Planned Parenthood's fetal harvesting — the first of two for the House Judiciary Committee, and the first of several expected in Congress — committee Chairman Bob Goodlatte, R-VA, responded to Democrats who have said Republicans should investigate undercover pro-life group Center for Medical Progress.

“Some Members have questioned why our investigation is focused on the conduct of Planned Parenthood, and not on the conduct of those who obtained the undercover footage,” said Goodlatte. “Part of the answer is that Planned Parenthood, unlike the undercover reporters, is granted huge amounts of federal funds, making it our business as Members of Congress — charged with controlling the federal purse-strings — to do what we can to ensure federal taxpayers are not contributing to the sorts of horrors reflected in the undercover videos.”

“The conduct exposed by the undercover videos may help inform Congress on how to enact better laws, or to see to it that current laws are better enforced, to help protect innocent life nationwide,” he concluded.

Goodlatte's comments kicked off a contentious hearing, with three pro-life witnesses and an abortion lawyer being grilled by Members. Democrats frequently attempted to undermine the legitimacy of the hearing, while Republicans tried to show that Planned Parenthood violates the humanity of the unborn.

In his opening statement, committee Ranking Member John Conyers accused Goodlatte and Republicans of having a “one-sided hearing…based solely on a series of deceptively-edited undercover videos.”

Conyers also said that “the Center for Medical Progress – the entity that filmed these videos and which could answer significant and troubling questions about their accuracy and veracity — is not here today,” and said Goodlatte's staff “chose not to invite Planned Parenthood, the target of today’s attacks.”

A GOP Judiciary spokesperson clarified to LifeSiteNews that “neither Planned Parenthood nor CMP were invited to today’s hearing” by Republicans.

“The House Judiciary Committee’s hearing is focused on the testimony from victims and experts on this issue,” said the spokesperson, “in order for Members and the American people to understand what issues the Committee is examining throughout its investigation.”

“The minority had the opportunity to invite a witness of their choice, but did not invite a representative from either organization.”

Democratic Communications Director Stephanie Baez told LifeSiteNews that “the committee preferred to have a legal expert as a witness” instead of Planned Parenthood representatives.

She also said, “It’s important to note that we did reach out to CMP to discuss the hearing with David Daleiden and intended to ask him to be our witness if that conversation were to have taken place. Daleiden did not return our call.”

A LifeSiteNews phone call to Daleiden was not immediately returned.

The lone pro-abortion witness was Priscilla Smith, Director of the Program for the Study of Reproductive Justice at Yale's law school. Smith represented late-term abortionist Leroy Carhart in front of the Supreme Court when he fought the federal partial-birth abortion ban in 2007.