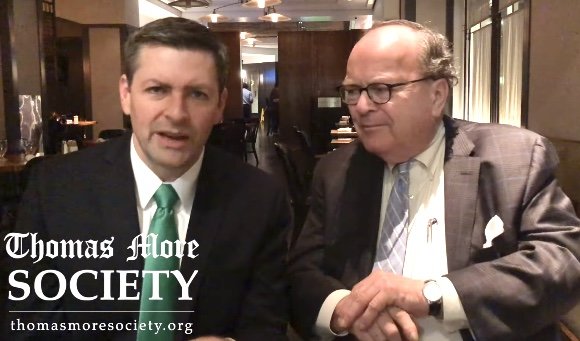 Attorneys representing the Center for Medical Progress discuss the case.

SAN FRANCISCO, November 13, 2019 (LifeSiteNews) — The “blockbuster trial of the century” wrapped up today in San Francisco with defense closing arguments after six weeks of testimony.

The jury now begins deliberations in the Planned Parenthood Federation of America vs Center for Medical Progress federal trial, which pits David Daleiden and his pro-life investigators against the abortion giant that receives a half-billion dollars in public money annually.

Jurors are down to nine men and one woman, with two of the original 12 excused, one for flu and another with a broken arm.

Lawyers for the CMP citizen journalists on trial for exposing Planned Parenthood’s trafficking in aborted baby parts say they were hampered by Judge William Orrick ruling out a First Amendment defense.

“Unfortunately, we couldn’t get Judge Orrick to back off from his insistence that the jury be instructed that the First Amendment … does not state any kind of defense to the charges in this case,” said Thomas Brejcha, founder of the Thomas More Society, in an update on the case.

Orrick, who has known ties to Planned Parenthood but refused to declare himself disqualified, instructed the jury Tuesday morning.

Closing arguments by Planned Parenthood’s lawyers followed Orrick’s instructions, during which they “pretty much called David and the other investigators every name in the book,” but principally “liars,” said defense lawyer Peter Breen, senior counsel for the Thomas More Society, who referred to the case as “the blockbuster trial of the century.”

In its retaliatory lawsuit, PPFA and 10 affiliates have accused CMP project lead Daleiden, investigators Sandra Merritt and Adrian Lopez, and founding board members Albin Rhomberg and Troy Newman of Operation Rescue of multiple crimes, including illegal taping, fraud, and violating the Racketeer Influenced and Corrupt Organization (RICO) statute in connection with CMP journalists going undercover at Planned Parenthood and National Abortion Federation conferences in 2014 and 2015.

Planned Parenthood lawyers argued Tuesday that their clients should be awarded not only “$600,000 in compensatory damages for all their fancy consultants,” but that “the multiples effect in punitive damages” — which would be millions of dollars — be imposed against CMP “to stop anyone from ever investigating Planned Parenthood ever again,” Breen said.

“What’s at stake here is the truth, and you can’t find the truth sometimes without having to undercover, because frankly the other side conceals it,” pointed out Brejcha.

“We found out in this trial, and in the criminal hearing before this trial, we’re not only talking about abortion … we’re talking about infanticide, and some horrible abusive things” that the CMP investigation “brought to light,” he said.

“I mean, literally, to determine that somehow tissue is coming from what they call, quote, ‘born-alive fetuses’ who presumably are born alive and then murdered? Does that make sense to you?” Rhonda Trotter asked the jury in her closing argument.

Trotter said the defendants lied when they said they wanted to uncover illegal activity committed by Planned Parenthood when, really, “their main objective was to destroy Planned Parenthood and end abortion,” noted the report from the San Francisco archiocese.

Planned Parenthood lawyers also claimed that Dean Alberty, a whistleblower featured the 20/20 exposé, lied to Congress, according to a CMP summary.

But Charles LiMandri of the Freedom of Conscience Defense Fund refuted this in his Tuesday closing arguments, pointing out to the jury that Alberty never recanted sworn testimony that, while harvesting body parts in a Planned Parenthood clinic in Kansas, he witnessed infanticide: an abortionist drowned twins born alive in a pan.

LiMandri also cited Centers for Disease Control statistics on the number of babies born alive during abortion, and the testimony of Advanced Bioscience Resources' procurement manager Perrin Larton, who said intact babies falling out of the birth canal during late-term abortions was not uncommon, CMP reported.

He replayed a video clip of a lunch meeting with Planned Parenthood’s Dr. Deborah Nucatola and CMP investigators in which she describes “crushing above and below the chest cavity of a fetus in order to harvest more intact organs,” related the San Francisco archdiocese report.

LiMandri said the illegal activity that Nucatola spoke about during that lunch – including selling body parts and changing abortion procedures to obtain better body parts for harvest – was the cause of public outrage, it reported.

He played a clip of then-Planned Parenthood president Gloria Feldt stating on the 20/20 episode that anyone breaking the law by selling aborted baby body parts must be investigated and prosecuted, and asked the jury to take Feldt at her word, CMP reported.

Planned Parenthood “conceded” after six weeks that it was suing because, in the words of CEO Melvin Galloway, “the brand was damaged,” Breen told the jury in his closing arguments Tuesday. (See full transcript here.)

Breen argued that investigative reporting is crucial to America’s democracy

“Our country was founded on a radical idea. It was put simply in three little words, ‘We the people,’” he told the jury.

Daleiden and the CMP investigators went undercover to let “Americans know and law enforcers investigate whether and to what extent our laws may have been violated,” Breen said.

They “uncovered some troubling and very difficult truths. Truths so bad the president and CEO of Planned Parenthood (Cecile Richards) had to apologize,” he said.

Defense closing arguments continued Wednesday. The pro-life legal groups are asking for prayers as the jury deliberates for a successful outcome.

Meanwhile, Judge Christopher Hite of the San Francisco Superior Court was expected to rule today on last month’s criminal preliminary hearing of Daleiden and Merritt, who are charged with 14 counts of illegal taping under California’s anti-eavesdropping law. However, Hite has deferred his ruling.