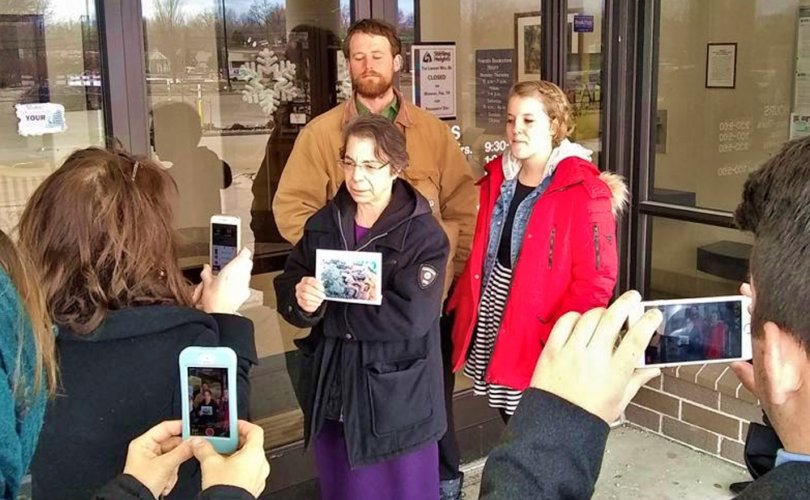 And Judge Marc Barron of the 48th District Court also ordered the five to stay 150 yards away from every abortion center in the United States pending their sentencing on March 14. The conviction carries a maximum penalty of 90 days in jail or a maximum fine of $500.

The pro-life advocates are viewing the verdict as a cross that they must now courageously carry.

“If you throw in your lot with an unwanted people, you have to suffer with them, and we count it as joy in terms of our faith, that we know that we’re with Jesus,” said Monica Migliorino Miller, director of Citizens for a Pro-Life Society and one of those found guilty.

They carried red roses and attempted to speak with the mothers there just minutes before their unborn children were scheduled to be killed, in the hopes of offering them alternatives to abortion and persuading them choose life for their children.

The pro-lifers remained in the abortion facility in peaceful solidarity with the unborn about to be aborted, as their mere presence served as an act of defense for them.

But in the trial at West Bloomfield which began Tuesday, Judge Barron refused to allow the pro-lifers the defence of necessity, and instructed the jury to ignore any comments about abortion, Migliorino Miller told LifeSiteNews.

“So that means that pro-lifers go into court basically naked, because as long as the true victims, namely the unborn children, are kept hidden, the court acts like they don’t exist, the court acts like no violence, no injustices are happening when abortions are performed, the jury is not allowed to take that into consideration, the prosecutor just tries to shape it as a simple trespass case,” she said.

But prosecutor Larry Sherman consistently objected to such comments, and the judge concurred, she said. “Of course, all those comments and remarks have to do with the the fact that unborn babies are being killed though the 24th week of pregnancy in the Women’s Center.”

However, Judge Michael R. Rumona also praised the pro-lifers for their “good cause,” and said that “as a Catholic” he agreed with their “pro-life convictions.”

Likewise, prosecutor Don DeNault described the February 15 and 16 trial as “not the usual trial with usual criminals. I believe these are good people.”

As in other Red Rose Rescues, the four pro-lifers entered the Northland Family Planning abortion center, operated by Michigan abortionist Renee Chelian, and tried to persuade the women there to choose life for their unborn children.

Witnesses for the prosecution, which included four police officers and an abortion center staffer, described the four as “peaceful,” telling the jury, “they handed out red roses, never raised their voices and sang Amazing Grace.”

During jury selection, one prospective juror said she was a Catholic, pro-life, and that if she knew someone was getting an abortion she would talk them out of it.

Prosecutor DeNault rather amazingly did not strike her from the jury. Nonetheless she wound up voting with the other five jurors to convict the pro-lifers of trespassing at the abortion facility.

Abortionist Chelian attended the trial with her daughter, private attorney Eileen Scheff and other abortion facility staff, all of whom shook their heads and stomped out of the court, apparently in reaction to the pro-lifers receiving a “light sentence.”

Robert Muise, attorney with American Freedom Law Center, defended the pro-lifers at both Michigan trials, and is planning to appeal all convictions.

Migliorino Miller, associate professor of theology at Madonna University in Michigan, released a video last fall explaining the intention and modus operandi of Red Rose Rescues, which were were inspired by Canadian pro-life advocate Mary Wagner.

Wagner, 44, has has spent nearly five years in jail for her pro-life rescue efforts, and is currently behind bars awaiting trial on March 5.

Their trial before Judge Frederick Weisberg will be held June 25 at the Superior Court of District of Columbia, 500 Indiana Ave., NW.