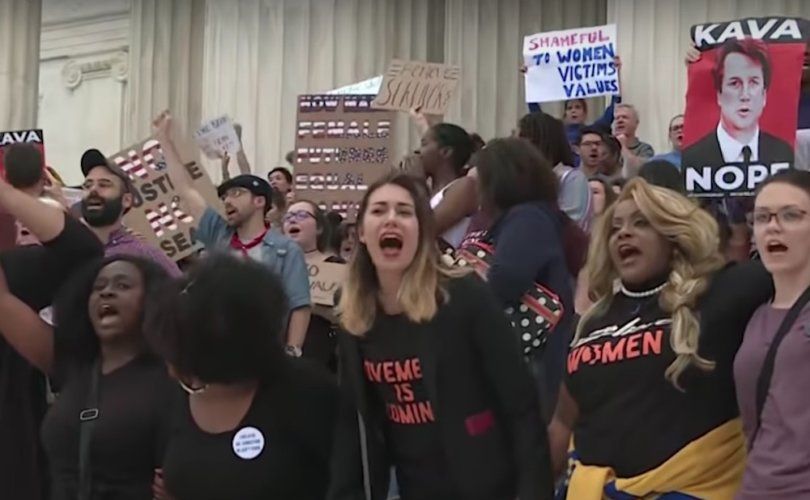 WASHINGTON, D.C., October 8, 2018 (LifeSiteNews) – Judge Brett Kavanaugh is now Justice Brett Kavanaugh, and the left-wing forces who pulled out all the stops to defeat him show no signs of cooling down anytime soon.

Spanning from early July to early October, the battle over his nomination was characterized by screaming protesters and false talking points about the possibility he might vote to overturn Roe v. Wade and finally allow states to vote directly on abortion. Kavanaugh has in the past spoken favorably about the late Chief Justice William Rehnquist’s critique of Roe, but also told the Senate Judiciary Committee he grants substantial weight to Roe’s status as precedent.

Shortly before the Senate was slated to confirm Kavanaugh a month earlier, a trio of women came forward to accuse Kavanaugh of sexual assault. The judge forcefully denied all of their claims, which lacked corroboration and suffered from other credibility problems. Yet Democrats and the media ran with their claims, triggering another round of hearings and investigations – none of which produced evidence against Kavanaugh.

Following their defeat Saturday, Kavanaugh’s foes have reacted by denouncing the perceived policy outcomes of his tenure, doubling down on the narrative that he’s a potential rapist, and even expressing pleasure at the suffering inflicted on his personal life.

Planned Parenthood Federation of America’s executive vice president Dawn Laguens advised supporters to “unleash your rage by making yourself heard every day. And especially Election Day.” The group’s former CEO Cecile Richards retweeted a quote urging women to “stay angry” because “you will need all your anger now.”

This isn’t just a broken court. This is a broken system.

Unleash your rage by making yourself heard every day. And especially Election Day.#believesurvivors #NoJusticeNoSeat pic.twitter.com/glaZIM8HRM

“Republicans are not, and never were, interested in the truth about Brett Kavanaugh’s history of sexual assault and lying. They are only interested in forcing their ideology on all of us,” NARAL president Ilyse Hogue said in a press release. “Republicans want to gut Roe v. Wade and criminalize abortion, repeal the Affordable Care Act, roll back LGBTQ rights, and decimate the Voting Rights Act and Affirmative Action. Their intent is to consolidate power and wealth through stripping hundreds and millions of Americans of generations worth of progress toward justice, equality, and opportunity.”

One video shows a group of protesters chanting “shut it down” as they pounded at – and tried to open – the locked Supreme Court during Kavanaugh’s swearing-in. The Daily Wire reports that the group had broken through a police line to reach the doors.

Breitbart has compiled additional reactions from the weekend’s Capitol Hill protests, which include sobbing, unintelligible screaming, a man in a “THIS IS WAR” t-shirt telling a counter-protester “you are subhuman” and “we’re done being polite,” shouts of “F*** YOU” and middle fingers aimed at a motorcade presumably carrying either Kavanaugh or lawmakers, and a woman screaming that she’s “sick and tired of this entire patriarchal, controlling bulls**t” while wearing a “WE STAND FOR LOVE” shirt.

Ariel Dumas, a writer for CBS's “The Late Show with Stephen Colbert,” tweeted, “Whatever happens, I'm just glad we ruined Brett Kavanaugh's life.” She later deleted the tweet, claiming to “regret my tone-deaf attempt at sarcasm.”

Remarkably, Politico reports that after a month of Democrats suggesting Kavanaugh was an alcoholic who frequented gang-rape parties, Democrats such as former Clinton aide Jennifer Palmieri and Chicago Mayor Rahm Emanuel believe their party suffers from being less “ruthless” than Republicans. Some are also blaming attorney Michael Avenatti for “introducing less credible allegations” that supposedly undermined Christine Blasey Ford’s claims, despite the choice of several Democrat senators to embrace the allegations he represented.

Ford attorney Deborah Katz says her client isn’t interested in getting Kavanaugh impeached from the Supreme Court, and has no plans to pursue her allegations further.