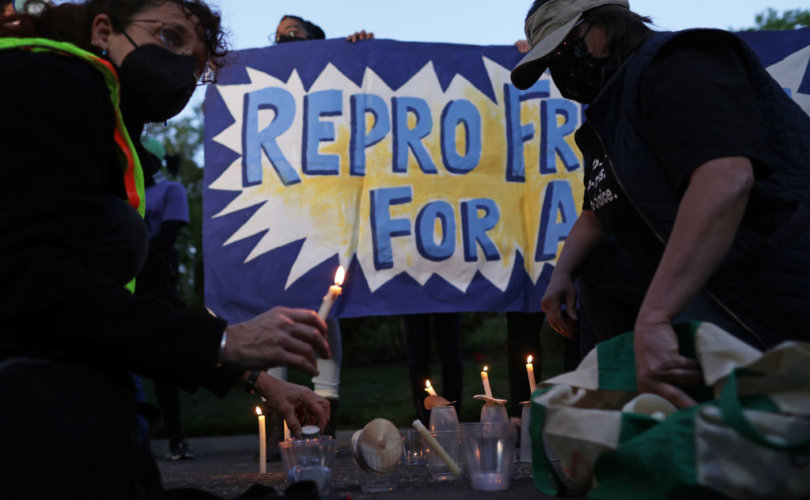 ALEXANDRIA, VIRGINIA - MAY 09: Abortion advocates light candles during a protest outside U.S. Justice Samuel Alito's house on May 09, 2022, in Alexandria, Virginia.Alex Wong/Getty Images

ALEXANDRIA, Virginia (LifeSiteNews) – Crowds illegally descending on Supreme Court Justice Samuel Alito’s home were met with the sound of “Tis so sweet to trust in Jesus” as Alito’s neighbor played the piano.

The news of the recent leaked draft opinion which, if published, would overturn Roe v. Wade has sparked a flood of violent pro-abortion protests across America. Recent targets have been the homes of pro-life Supreme Court justices.

Alito’s neighbor plays “Tis So Sweet to Trust in Jesus” on piano with window open as pro-aborts picket #Alito home.

Quote: “I wanted to do something to counter the noise…There is nothing more steadfast than the joy of worshipping our Savior through precious hymns.” pic.twitter.com/8jUk1htSMO

Earlier this week, Supreme Court Justice Alito and his family were moved from their home to a secure location, in preparation for just such protests.

On Monday, Alito found his home targeted by angry mobs as about 200 people marched down the street. Amid the noise and screaming, Alito’s neighbor played “Tis so sweet to trust in Jesus” on the piano.

“I wanted to do something to counter the noise, the chaos, the sadness of those protesting life in front of an empty house,” Alito’s neighbor told Standing for Freedom Center editor-in-chief John Wesley Reid.

“There is nothing more steadfast than the joy of worshipping our Savior through precious hymns,” the neighbor continued.

Some protestors used megaphones to lead the crowd in chants of “You don’t care if people die” and “My body, my choice.”

“F*** the Court and the legislature! We are not your incubator!” protestors screamed. Shouting out for “justice,” the crowd threatened, “If we don’t get it, burn it down.”

Recently, abortion activists have become violent as they have attacked both pro-life organizations and churches. Abortion activists disrupted Mass in Los Angeles and vulgarly protested outside of a Catholic church in New York City.

The New York abortion supporters blocked the doors of St. Patrick’s Old Cathedral and screamed about “killing the babies.” The headquarters of a Wisconsin pro-life group was firebombed and vandalized. Several Catholic churches and pro-life pregnancy centers have also been vandalized.