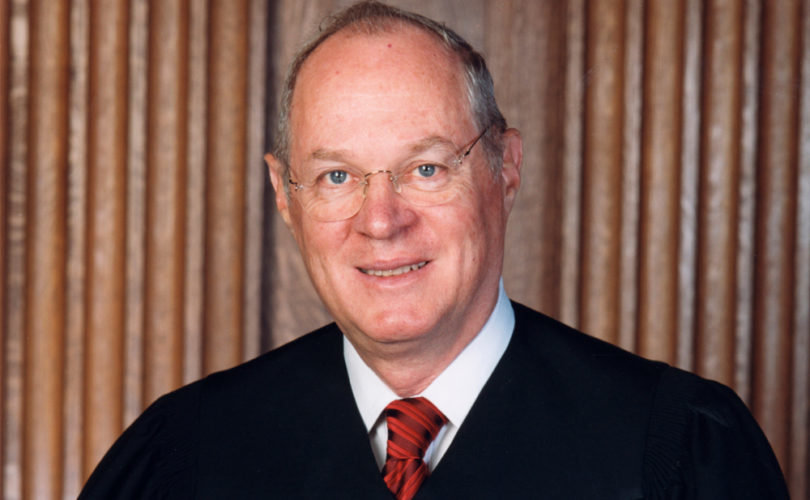 The Ronald Reagan appointee said on Wednesday that if a public official has a moral objection to homosexuality, he must either follow the law or quit public service.

The judge's comment came in answer to a question a student asked about government officials who disagree with the Supreme Court's decisions on gay marriage, or abortion, and if those citizens have the constitutional right to act according to their sincerely held moral beliefs.

Kennedy replied that no, they do not have the right to refuse to comply with the law.

Curiously, Kennedy cited as buttressing his point the fact that few judges resigned under the Third Reich. “How many judges, do you think, resigned in the Third Reich?” Kennedy asked, to the response of silence in the great hall. He answered his own question by raising three fingers.

At one point, his words made quitting sound noble: “Great respect, it seems to me, has to be given to people who resign rather than do something they view as morally wrong, in order to make a point.”

The justice admitted that Christians who must “enforce a law that they believe is morally corrupt” face “difficult moral questions.” “However,” he said, “the rule of law is that, as a public official, in performing your legal duties, you are bound to enforce the law.”

Responses from Christian leaders noted the irony of saying that for public employees, the moral thing to do is follow immorality. Kennedy made no mention of religious convictions as actual, universal truths.

Liberty Counsel Chairman Mat Staver commented to LifeSiteNews, “Unjust laws should be resisted.” “The history of the United States includes non-compliance, even by presidents, to immoral laws.”

Staver told LifeSiteNews, “Religious freedom and conscience should be protected.”  In fact, Staver said, morality requires the reverse of what Kennedy advocated. “Justices or judges who disregard the Constitution and impose their own will should resign.”

Gay activists were quick to applaud. The online journal The New Civil Rights Movement reported that Justice Kennedy “left no wiggle room for the 'religious accommodation' the renegade Kentucky clerks are demanding for themselves.”

Justice Kennedy and the lonely Promethean man of liberalism