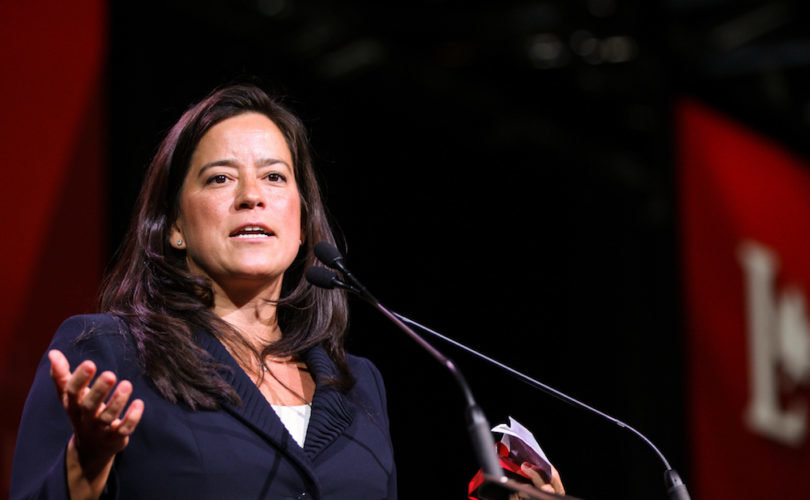 OTTAWA, June 3, 2016 (LifeSiteNews) – If the Trudeau Liberals eventually decide to widen their controversial euthanasia regime even further, as they’ve suggested they will, recent comments by the justice minister should provide fodder aplenty for their critics.

Justice Minister Jody Wilson-Raybould has gone on the record insisting Bill C-14’s restrictions on euthanasia and assisted suicide need to be tougher than the Supreme Court decision in Carter or else it could allow assisted suicide for sex abuse victims, and combat veterans suffering from post-traumatic stress disorder.

Last week the Liberal government won a resounding 186-137 final vote to get Bill C-14 through the House of Commons. Now the Senate is expected to hear from witnesses who say the bill does not offer enough protection to the weak and vulnerable and from advocates of medically assisted death who say it has so many restrictions the Supreme Court of Canada will throw it out.

If the Senate doesn’t remove the restrictions, warns Shanaaz Gokool, CEO of Dying with Dignity Canada, “Bill C-14 will be constitutionally dead on arrival: a warning the Liberal government has chosen to ignore. We encourage members of the Senate not to make the same mistake.”

In its 2015 Carter decision, the Supreme Court reversed its 1993 Rodriguez ruling and found that “consenting” adults have a right to “medical assistance in dying” – assisted suicide and euthanasia – if they have “grievous and irremediable” conditions causing “intolerable” suffering.

The Supreme Court delayed enforcement of its decision first for a year and then, at the insistence of the Liberal government, added a few more months. But the decision comes into force June 6.

Without a new law, all there is to protect the vulnerable from agreeable killers is the broad guidance of Carter and the particular policies of the provincial colleges of physicians. But this, according to Wilson-Raybould, would leave Canada with “one of, if not the broadest assisted dying regimes in the world.”

Bill C-14 would restrict medical help in dying to those “in an advanced stage of irreversible decline” from an incurable disease, illness or disability for whom death is “reasonably foreseeable.”

Justifying the tougher approach as a balance between opposing lobby groups, Wilson- Raybould told the House of Commons, “Under an approach where any serious medical condition is eligible, the law would be saying that an assisted death could be an acceptable treatment for a soldier with post-traumatic stress disorder, a young person who suffered a spinal cord injury in an accident or a survivor whose mind is haunted by memories of sexual abuse.”

But one of the leading advocates for the unrestricted right to die, Dalhousie University professor Jocelyn Downie, was cited by Canadian Press rebutting the justice minister. None of her hypothetical instances were “irremedial,” said Downie, and so would still have been blocked by Supreme Court’s criteria in Carter.

Wilson-Raybould also justified the bill’s omission of “advanced requests” – something dearly sought by assisted death advocates. This would allow people to pre-request euthanasia in anticipation of losing their cognitive powers due to a disease such as Alzheimers.

However, the justice minister explained, “Even the Alzheimer Society of Canada” has argued that “medical assistance in dying should only be possible when a person is competent at the time the assistance is administered. It says that advance requests not only pose risks to vulnerable patients, but they could also contribute to false stereotypes, undermining its message that it is possible to live well with this disease.”

While the Liberal government has been pushing for final passage before the June 6 Supreme Court deadline, anti-euthanasia advocates are disputing their claim that the current bill is necessarily more problematic than the regime envisioned in the Supreme Court ruling.

“For those who are concerned that Bill C-14 will not be passed by June 6, stop worrying, it will definitely not become law by June 6. Therefore the approach needs to be to amend Bill C-14 in the Senate and if it is not adequately amended, to defeat the bill,” he wrote this week.

“If this bill passes, in its current form, the language of Bill C-14 will lead to significant growth of euthanasia. There will be many stories that people will refer to as a ‘slippery slope.’ Let me tell you now, these stories will not be the result of a ‘slippery slope’ but rather they will be based on the fact that the language of Bill C-14 allowed these acts to occur.”