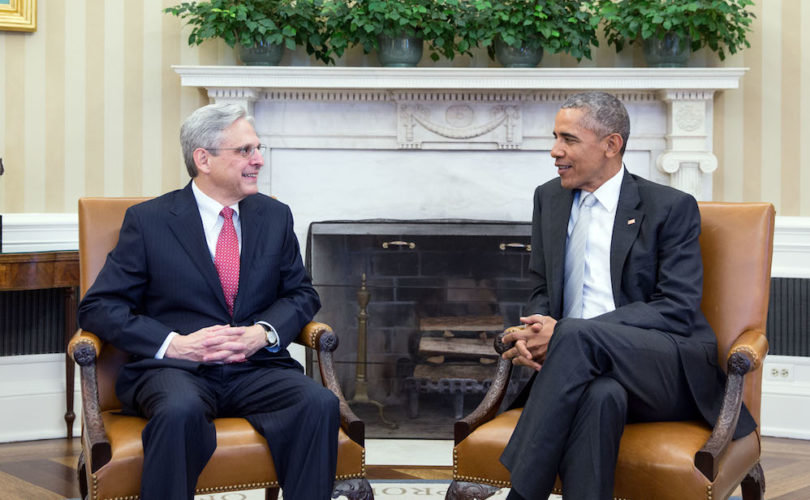 December 20, 2016 (LifeSiteNews) – On Monday, Supreme Court Chief Justice John Roberts denied a request to consider whether the Senate must be forced to vote on President Obama's pro-abortion Supreme Court nominee Merrick Garland. Garland has now returned to his job as chief justice of the D.C. Circuit.

“The effort by a New Mexico lawyer to force a Senate vote on the Supreme Court nomination of Judge Merrick B. Garland may have reached its final point on Monday morning, as Chief Justice John G. Roberts, Jr., refused the request,” wrote Supreme Court watcher Lyle Denniston on his law blog. “The Chief Justice acted without giving any reason, without sharing the issue with his colleagues, and even without seeking a response from the Senate.”

The “legal efforts on behalf of Garland failed for lack of standing in the district court and in the D.C. Circuit,” according to The National Law Journal.

“Judge Garland has a lifetime appointment as a federal appeals court judge,” continued Denniston. “He has not been performing those duties since his nomination to the Supreme Court, but presumably will return to them in the near future….There appears to be no way that President Obama could force Senate action before he leaves office at noon on January 20. He has shown no desire to try.”

Garland is now once again listed on the D.C. Circuit's website as scheduled to hear three cases before the swearing-in of President-elect Trump.

“A ninth Justice is not likely to join the Court until March, at the earliest,” Denniston predicted, noting that Democrats may try to make it difficult for a Trump Supreme Court nominee to be approved due to possible “resentment” about the lack of a vote on Garland.

The 11 people Trump says he is considering as possible Supreme Court nominees are for the most part strongly pro-life and pro-marriage.