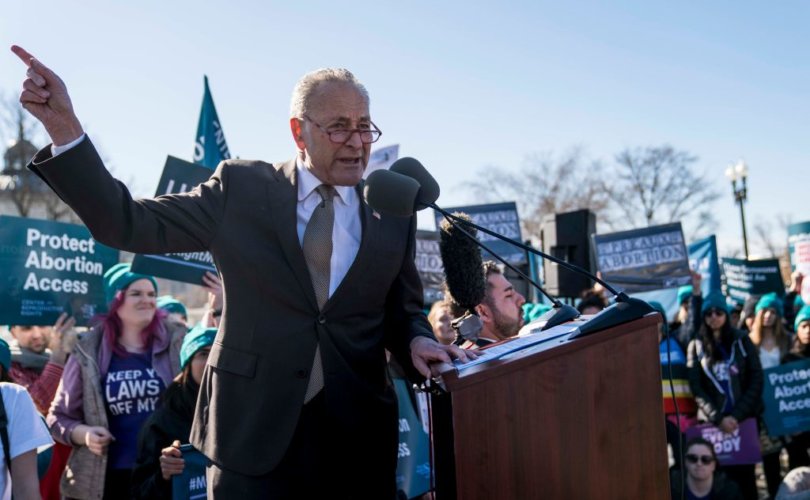 Schumer made those remarks today outside the Court at a pro-abortion rally.

“I wanna tell you, Gorsuch, I wanna tell you, Kavanaugh: you have released the whirlwind, and you will pay the price!” he exclaimed. “You won’t know what hit you if you go forward with these awful decisions.”

This morning, Senator Schumer spoke at a rally in front of the Supreme Court while a case was being argued inside. Senator Schumer referred to two Members of the Court by name and said he wanted to tell them that “You have released the whirlwind, and you will pay the price. You will not know what hit you if you go forward with these awful decisions.”

Justices know that criticism comes with the territory, but threatening statements of this sort from the highest levels of government are not only inappropriate, they are dangerous. All Members of the Court will continue to do their job, without fear or favor, from whatever quarter.

Sen. Josh Hawley, R-MO, announced he will introduce a motion tomorrow in the Senate to censure Schumer over the comments.

I would call on Schumer to apologize, but we all know he has no shame. So tomorrow I will introduce a motion to censure Schumer for his pathetic attempt at intimidation of #SupremeCourt

President Donald Trump and numerous other figures, both conservative and liberal, blasted Schumer.

“He must pay a severe price for this!” Trump quipped.

There can be few things worse in a civilized, law abiding nation, than a United States Senator openly, and for all to see and hear, threatening the Supreme Court or its Justices. This is what Chuck Schumer just did. He must pay a severe price for this!

A Schumer spokesman responded to Roberts by accusing the chief justice, who sided with the court’s left wing on same-sex “marriage” and has voted twice to uphold Obamacare, of “follow[ing] the right wing’s deliberate misinterpretation of what Sen. Schumer said.”

“Sen. Schumer’s comments were a reference to the political price Senate Republicans will pay for putting these justices on the court, and a warning that the justices will unleash a major grassroots movement on the issue of reproductive rights against the decision,” said Justin Goodman, Schumer’s spokesman.

Supreme Court justices are not elected and serve for life.

Less than one month after this feigned outrage, Senator Schumer *threatens* that Justices Kavanaugh and Gorsuch will “pay the price” if they rule to protect unborn children.@SenSchumer, do you even know right from wrong anymore?

The only ones “paying the price” are the unborn. https://t.co/zWu9mW7RQs

If I made the same statements that Sen. Schumer made today, federal marshals would be AT MY DOOR TODAY! Threats and violence have no place in the abortion debate. #ProLife @SBAList @StudentsforLife @LiveAction @March_for_Life @AbbyJohnson #Schumer https://t.co/1ptxI8erjl

Schumer planned this line, and he meant it. He wants Gorsuch and Kavanaugh to be scared for their lives. https://t.co/b6psYdN6k8

Watch the video, as he makes his threat, Schumer clearly points directly at the Supreme Court.

Schumer’s office now claims it was about Senate Republicans paying the “political price” for their confirmation.

So why point toward the Supreme Court?�� https://t.co/FUG7DaTWKi

As a fun exercise, envision Trump making this kind of comment about Ginsberg and Kagan. Then envision the self-righteousness and condemnation by some in political media… https://t.co/NUx27gNeyX

2. Schumer should be sanctioned by the Bar, admonished by the Senate, investigated by the Senate ethics committee, and even reviewed by the DOJ. No individual, let alone the Senate Democrat leader, who is also a lawyer, should escape accountability for his loathsome conduct.

“Let's hear it for all the people who have abortions.”

I don’t say this lightly…the Abortion movement is propelled by an evil force.
This is the only explanation for anyone to chant & cheer for the death of the innocent.pic.twitter.com/UFGn5bF2FK

Also present at the pro-abortion rally were celebrities Busy Phillips and Elizabeth Banks and numerous other Democrat congressmen.