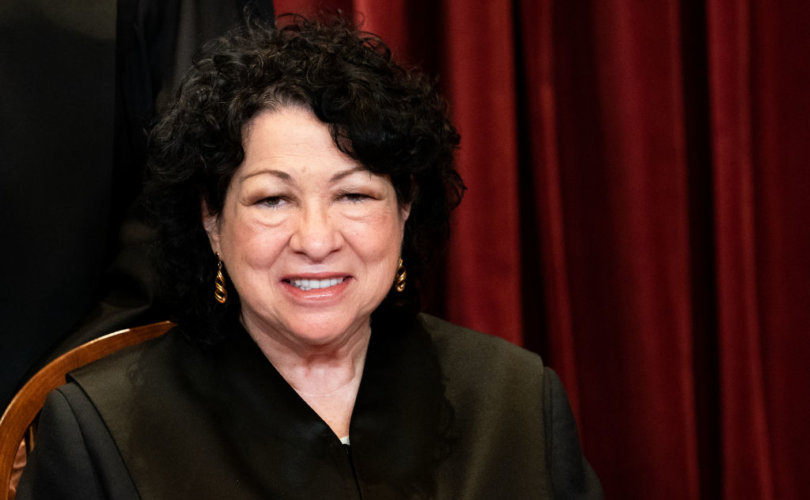 WASHINGTON, D.C. (LifeSiteNews) – Supreme Court Justice Sonia Sotomayor is concerned that the “separation between church and state” is falling apart.

She shared those concerns in her dissent Tuesday in Carson v. Makin, a Supreme Court (SCOTUS) case about a Maine school choice program that prohibited parents from using vouchers to send kids to religious schools.

SCOTUS ruled that the Maine program violated the Free Exercise Clause of the Constitution.

“This Court continues to dismantle the wall of separation between church and state that the Framers fought to build,” Justice Sotomayor wrote to open her dissent.

She argued SCOTUS “revolutionized Free Exercise doctrine” in 2017 when it ruled in Trinity Lutheran v. Pauley that a Missouri program that excluded churches from a grant program to get recycled tires for playground materials violated the Constitution.

The Carson and Trinity Lutheran decisions have confirmed Sotomayor’s fear about SCOTUS and religious freedom, she wrote.

“As a result, in just a few years, the Court has upended constitutional doctrine,” she wrote. SCOTUS has “shift[ed] from a rule that permits States to decline to fund religious organizations to one that requires States in many circumstances to subsidize religious indoctrination with taxpayer dollars.”

SCOTUS already ruled in 2002 that an Ohio school choice program that allowed parents to use vouchers to pick a private, religious school did not violate the Constitution.

“People like Sotomayor want Freedom FROM Religion. To push religion out of our public lives and into the shadows,” Congressman Jeff Duncan (R-SC) tweeted. “But that’s not what our Founders envisioned at all. They fought to protect our Freedom OF Religion, where our religious expression is protected and mutually respected.”

People like Sotomayor want Freedom FROM Religion. To push religion out of our public lives and into the shadows. But that’s not what our Founders envisioned at all. They fought to protect our Freedom OF Religion, where our religious expression is protected and mutually respected. https://t.co/okub4uVPev

Daily Wire commentator and Catholic Michael Knowles said the separation of church and state is “not real.”

“It’s not real it, was never real. That phrase, ‘the wall of separation between church and state,’ it comes from a private letter from Thomas Jefferson. It means absolutely nothing in the American law,” Knowles said on his show Wednesday.

At most, Knowles said, is that it means there would not be a national church established by the federal government.