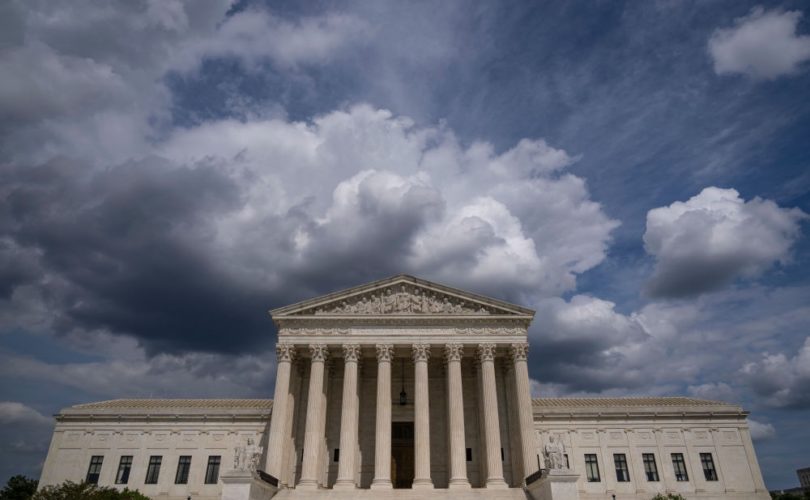 Leading the defense of HB 1510 is Mississippi Solicitor General Scott Grant Stewart, making the case that judicial precedent asserting a “right” to abortion is “egregiously wrong” with “no basis in text, structure, history, or tradition.” The state further argues that in addition to its legal bankruptcy, the legal regime Roe set into motion has “proven hopelessly unworkable.”

The justices’ questioning of Stewart, Center for Reproductive Rights attorney Julie Rikelman, and Biden administration Solicitor General Elizabeth Prelogar did not give away a majority of the justices’ intentions in the case, but most of the Republican-appointed jurists did appear at least somewhat skeptical of Roe’s justifications, with only Chief Justice John Roberts hinting at an inclination to preserve the precedent in some way.

Liberal justice Stephen Breyer raised eyebrows by claiming that “the country decided to resolve its differences by this Court laying down a decision in Roe,” when in fact Roe represented judges taking the issue out of the country’s hands. The ruling has been widely credited with intensifying the abortion debate. Breyer claimed that to reexamine such a “watershed” case would “subvert the court’s legitimacy.”

Left-wing Justice Sonia Sotomayor was the most aggressively pro-abortion in her questioning, at points falsely claiming the beginning of human life is primarily a “religious view” and dismissing the evidence for fetal pain as “fringe,” and questioning whether the Court could overcome the “stench” of an anti-Roe outcome supposedly making the Court seem “political,” to which Stewart responded that the best defense against such a perception would be to simply ensure that the ruling is grounded in the legal and factual merits.

Most tellingly, Sotomayor tacitly conceded that Roe is not rooted in the actual text of the Constitution (something conceded by many pro-abortion legal scholars) by questioning whether a reversal would jeopardize other precedents. “There’s so much that’s not in the Constitution,” she said.

Chief Justice John Roberts, who was appointed by former President George W. Bush, gave mixed signals that may indicate he is leaning toward upholding the Mississippi law without going all the way to overturning Roe. “If you think that the issue is one of choice … viability, it seems to me, doesn’t have anything to do with choice. If it really is an issue about choice, why is 15 weeks not enough time?” he pressed Rikelman.

However, he also challenged Stewart on petitioning the Court to take the case on the narrower grounds of HB 1510, then once it was granted, moving to a broader attack on Roe. Stewart argued that overturning Roe is the best way to resolve the myriad questions surrounding HB 1510.

Conservative Justice Samuel Alito delivered arguably the most aggressive challenging of Roe, arguing that the viability line “doesn’t make any sense” as a legal standard because it changes with medical advances, and pressing Prelogar on the notion that an egregiously wrong precedent cannot be overturned unless facts change or a “new argument” is made, getting her to acknowledge that Plessy v. Ferguson, the case which established “separate but equal” in racial segregation, should have been overturned at any point because it was factually wrong the moment it was decided.

But while most of the above justices’ likely decisions are generally considered foregone conclusions (as are those of conservative Clarence Thomas and liberal Elena Kagan), the biggest question was how former President Donald Trump’s three appointees will rule.

Justice Brett Kavanaugh repeatedly stressed that the Constitution is silent on abortion and that overturning Roe would simply return to the states the ability to debate and decide their own abortion laws, and questioned why the court should be the arbiter of such questions rather than the American people. He also noted that America “would be a much different place” today if the Court had deferred to precedent in various high-profile cases throughout history, including Brown v. Board of Education, which overturned Plessy.

Justices Neil Gorsuch and Amy Coney Barrett were less clear, though to the extent their comments fell in any direction they were in questioning aspects of the pro-abortion status quo. Gorsuch suggested that the “undue burden” standard for abortion restrictions established by Planned Parenthood v. Casey (the 1992 case that opened the door to some abortion regulations while reaffirming the “right” to abort) is “unworkable,” and questioned whether there was some “other intelligible principle that the court could choose” to separate some abortions from others. Barrett, meanwhile, suggested that safe-haven laws for newborns may change the weight of that “burden” by giving mothers additional options.

Several pro-life and pro-abortion observers concurred that the day’s proceedings were distinctly unfavorable to Roe’s prospects, while other conservatives cautioned that cross-examination does not capture all of the factors that go into justices’ decision-making process, and therefore a split decision upholding HB 1510 without ending Roe or Casey remains a serious possibility:

Former SCOTUS clerk texts me: "That went about as badly for the pro-abortion side as it could reasonably have been expected to go." He's right. No missteps on pro-life side; no worrying lines of questions from the conservative justices; Kagan surprisingly quiet.

once the Court eviscerates abortion rights (as it did with voting rights) perhaps the Dem Senate will create an exception to the filibuster for protection of constitutional rights, put Roe into statute and pass voting rights. Biden better use famed negotiating powers on Manchin

FWIW, my prediction remains a lackluster 3-3-3 split—*possibly* a 4-3-2 split with BMK joining CT/SAA/NMG on a clean Roe overrule, with ACB joining JGR in a murky Casey-centric middle-ground controlling opinion.

But five votes to overturn Roe does seem like a real possibility. https://t.co/l4Aecl7iyP

People, if you think that the overruling of Roe is a done deal, you are (1) paying way too much attention to certain clickbait journalists with incentives to maximize the outrage of their readers and (2) underestimating the forces that will operate between argument and decision.