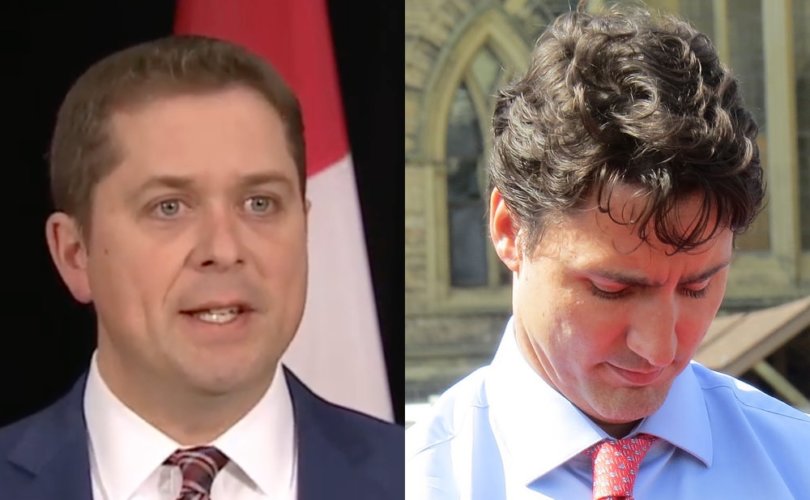 OTTAWA, March 7, 2019 (LifeSiteNews) – Canada’s Conservative leader Andrew Scheer says Justin Trudeau’s cabinet should all quit from a government which is in “total chaos.” His statement comes after another Liberal minister resigned this week in the wake of testimony that the prime minister and senior staff tried to politically interfere in a corruption trial.

Jane Philpott stepped down Monday as Treasury Board chief, saying she’s “lost confidence in how the government has dealt” with the SNC-Lavalin affair, reported the Huffington Post.

Philpott is the third high-level Liberal to resign in the rapidly metastasizing scandal that has 51 percent of Canadians saying Trudeau should resign, according to an Ipsos poll commissioned by Global News.

Jody Wilson-Raybould, the minister at the heart of the storm, quit veterans affairs February 12, and Trudeau’s longtime friend Gerald Butts quit as his principal secretary February 18.

“I am firmly convinced that nothing happened here beyond the normal operations of government,” Butts said.

He testified Wilson-Raybould made no allegations about inappropriate pressure until she was dropped as minister of justice in January.

But Scheer dismissed Butts’s testimony as “damage control” and said the buck stops with the prime minister, reported the Toronto Sun.

“This is all about Justin Trudeau and his leading a campaign of political interference,” Scheer said.

“Jane Philpott’s resignation from cabinet clearly demonstrates a government in total chaos led by a disgraced prime minister, consumed with scandal, and focused only on his political survival,” Scheer said Monday.

Last week he called on Trudeau to resign because “he’d lost the moral authority to govern,” Scheer said.

Justin Trudeau simply cannot continue to govern this great nation now that Canadians know what he has done. That is why I am calling on Justin Trudeau to resign. My statement: https://t.co/FkMT8l8ave pic.twitter.com/lqy6nq1TkU

“Today a senior member of his inner circle has come to the same conclusion,” said Scheer, adding that if all Liberal cabinet ministers do not do likewise, Canadians will conclude the “ethical rot that infects this government has consumed the Liberal Party entirely.”

Scheer has also asked the RCMP to investigate possible obstruction of justice following Wilson-Raybould’s testimony last week to the justice committee that has been variously described by the media as “damning,” “scorching,” “stunning,” and a “bombshell.”

She said Trudeau and top-level staffers “hounded” her over four months when she was justice minister in a “consistent and sustained effort to seek to politically interfere” in the prosecution of SNC-Lavalin, including “veiled threats” against her.

The engineering giant is charged with corruption and fraud in connection with government contracts in Libya and has been lobbying for a deferred prosecution agreement rather than go to trial.

A criminal conviction would ban SNC from receiving federal contracts for 10 years under current rules.

In a September meeting with Trudeau and Wernick, the latter mentioned the election in Quebec, and the prime minister interjected: “I am an MP from Quebec — the member from Papineau,” as reported in the CBC.

“I was quite taken aback,” Wilson-Raybould said, adding she asked Trudeau directly if he was interfering in her role as attorney general.

“No, no, no,” she recalls Trudeau saying. “We just need to find a solution.”

Wernick called her December 19 and said: “I think (the prime minister) is gonna find a way to get it done one way or another. So, he is in that kinda mood and I wanted you to be aware of that,” Wilson-Raybould testified.

She did not resign because “I was, in my opinion, doing my job as the attorney general,” Wilson-Raybould told the committee.

“And as long as I was the attorney general I was going to ensure that the independence of the director of public prosecutions in the exercise of their discretion was not interfered with.”

When Trudeau told her January 7 she was being moved from justice, “I stated I believed the reason was because of the SNC matter. They denied this to be the case,” Wilson-Raybould said, as reported in the Globe and Mail.

She quit veterans affairs a week after the Globe published a story on the SNC-Lavalin affair based on anonymous sources, and a day after Trudeau told reporters her presence in cabinet “speaks for itself.”

Since their majority victory October 2015, the Trudeau Liberals have sparked outrage among pro-life and pro-family advocates for their abortion extremism and promotion of homosexuality.

Among those policies was requiring employers to sign a pro-abortion, pro-transgenderism attestation to receive Canada Job Grants; earmarking $650 million to push abortion in the developing world, with $241 million of that specifically for abortion groups such as Planned Parenthood and Marie Stopes International; and forcing public servants to take a pro-LGBT “gender equality” test, with unspecified consequences if they refused or failed to provide the appropriate “feminist” answers.

Trudeau decreed as Liberal leader no pro-life advocate could run as a candidate in his party.

And while Wilson-Raybould is being lauded in many quarters for her courage and integrity, unfortunately, as justice minister she was squarely behind Trudeau’s socially liberal agenda.

She crafted Bill C-16, which entrenches gender theory into law by adding “gender expression” and “gender identity” to Canada’s Human Rights Code and to the Criminal Code’s hate crime section, announcing the bill at a press conference attended by a 10-year-old Charlie Lowthian-Rickert, a “trans girl” from near Ottawa, as reported by the CBC.

“A principled Liberal is still a Liberal,” pointed out Johanne Brownrigg in the Post Millennial.

“Not only has JWR stood over some of the worst legislation passed in this country, her much-admired chief of staff, Jessica Prince, has as well.”