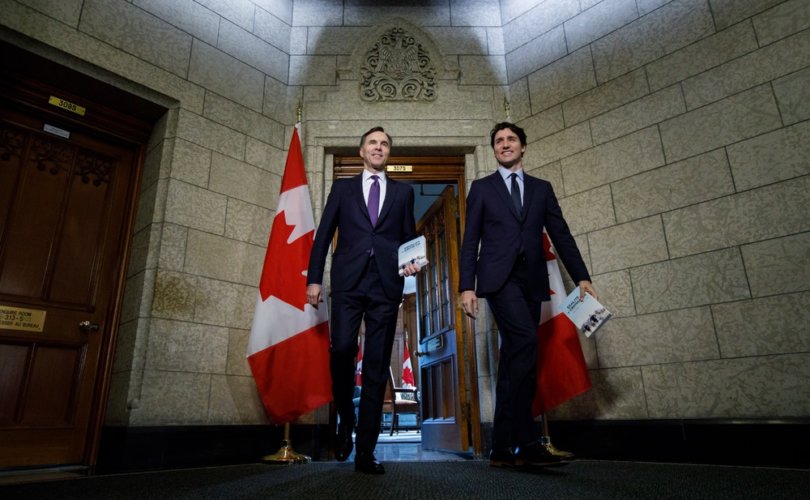 OTTAWA, March 1, 2018 (LifeSiteNews) — Pundits and economists have pilloried Justin Trudeau’s Liberal government for a federal budget they say institutionalizes feminism, panders to left-wing interest groups, patronizes women, and is long on ideology and bureaucratic meddling, but short on economics.

That includes promises of a federal pharmacare plan, a “feminist foreign aid agenda,”as well as “billions to boost women in the workforce” and to “ensure they are paid at the same level as their male counterparts,” the Star reported.

Indeed, Morneau’s top priority appears to be to push women out of the home and into the workforce in the name of gender equality.

To that end, the budget reaffirmed that the Liberals will introduce pay equity legislation — equal pay for work of equal “value” — in the fall.

The legislation will be binding not only on the federal government, but on crown corporations and federally regulated companies in the private sector, such as “banks, airlines, telephone and cable companies, and radio and television broadcasters,” reported iPolitics.

Peter Stockland, senior writer at Cardus, and publisher of Convivuum, decried Morneau’s effort as “barely a budget at all.”

Rather, “it’s much more a 281-page social engineering blueprint, with 76 pages of economic and fiscal outlook appendices tacked on to keep accounting types from lapsing into withdrawal,” he observed.

“Once upon a time the federal budget was about the budget of the federal government,” noted Coyne. “It is now about virtually everything else except spending or taxing or the economy.”

Moreover, “while ‘growth’ is mentioned in the budget title — Equality + Growth — its second billing is telling. This is a budget that is much more about equality than it is growth. That, and pandering to every conceivable Liberal client group and policy cult.”

Indeed, so pronounced is its feminist bent that the budget “appears to have been written out of Status of Women Canada…or perhaps a campus gender studies course: this is surely the world’s first ‘intersectional’ budget,” wrote Coyne, who has a master’s degree in economics from the London School of Economics.

“To be fair, encouraging more women to enter and stay in the labour force, as a number of measures in the budget propose to do, is not only about equality but growth,” he observed.

“The same cannot be said for institutionalizing — for all future governments, this budget claims — the mix of ideological cant and bureaucratic busywork known as ‘gender-based analysis,’ still less the fantastic anti-economics of ‘equal pay for work of equal value’.”

Pundit John Robson also raked the Liberals over the coals in the National Post.

The budget “reeks of blithe arrogance, taking on ever-more ambitious and glorious goals because government is omniscient, omnipotent and all-merciful. Why, the Finance Minister declared ‘We are, in this budget, taking measures to ensure women can be successful’,” he wrote.

“Leaving aside the patronizing patriarchal image of two rich powerful straight white knights in shining armour riding to the rescue of frail women unable to succeed otherwise, the word ‘ensure’ rather than, say, ‘assist’ is revealing,” noted Robson.

“This a government, and I mean a government not just a ministry, [that] cannot pay its own employees properly because its Phoenix computerized pay system is an expensive disaster,” Robson wrote.

“The government buys into RBC Economics’ factoid that if women had the same work-force participation rate as men, GDP would be four per cent higher. Maybe it would be. Women providing daycare for their kids at home doesn’t count as GDP. Women buying daycare from others does,” he wrote in the Financial Post.

“But economic activity isn’t about maximizing GDP. It’s about increasing welfare, utility, happiness — call it what you will. Women should choose what’s best for them, not what juices GDP or satisfies first-wave feminist orthodoxy.”