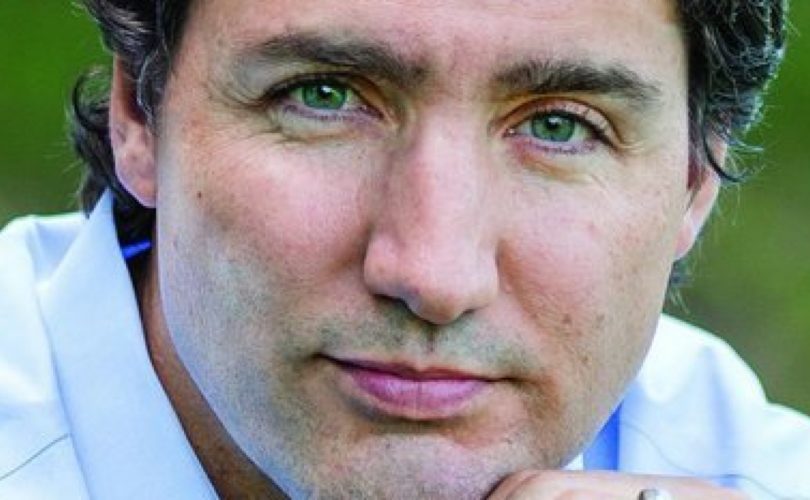 In a newly-released memoir widely seen as an attempt to shore up public support before the Canadian federal election in a year, Liberal leader Justin Trudeau has said that gay “marriage” and abortion are among his “core principles.”

Trudeau, who is Catholic, says that when speaking to those who were “opposed to gay marriage, abortion, and legal reform on marijuana” he cannot “simply pander to their position” but has to “adhere to my own views.”

“My response would be to say, ‘We disagree on this, and since we are both arguing from what we regard as our core principles, there is probably little room for compromise. I hope there is enough common ground on other issues, however, for you to consider voting for me.’”

Since taking the helm as Liberal leader last year, Trudeau has stoked controversy by openly stating his “admiration” for China’s “basic dictatorship,” has barred pro-life candidates from running in the party’s “open” nominations, and has marched in various homosexual parades.

Trudeau's dedication to abortion-on-demand is so complete that he has vowed that the Liberal party would not even consider banning sex-selective abortions, while he has said in the past that he would support Quebec sovereignty if the federal government ever attempted to restrict abortion.

In the memoir, Trudeau writes that support for abortion is what makes the Liberal Party “liberal.”

“We made the Liberal Party a truly liberal party when delegates decisively endorsed a motion defending a woman’s right to choose whether to have an abortion,” he wrote.

Regarding religion and Catholicism, Trudeau writes that while he believes in the “existence of God and in the values and principles universal to all major religions,” it was the “dogmas of Catholicism that I struggled with, particularly the idea that someone who was not a sincere and practicing Catholic could not gain entrance to heaven.”

“That seemed strange and unacceptable to me,” he writes.

Trudeau writes that for him, faith in God and public duty have nothing in common.

“As someone who was raised Roman Catholic, and who attended a Jesuit school, I understand that it is difficult for people of deep faith to set their beliefs aside in order to serve Canadians who may not share those beliefs. But for me, this is what liberalism is all about. It is the idea that private belief, while it ought to be valued and respected, is fundamentally different from public duty.”

Ending his book with a 2012 speech given in Toronto at an Islamic convention, Trudeau writes: “Let us pledge ourselves to building a country that brings people together; that finds the highest virtue in compromise, moderation, and common ground.”