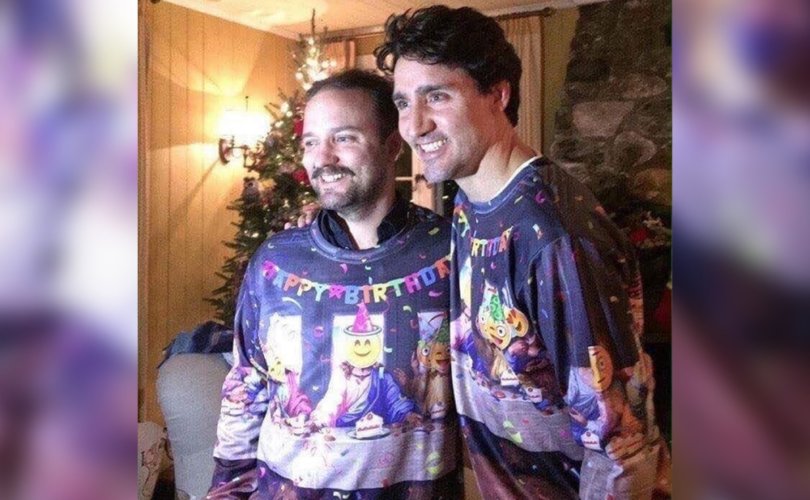 OTTAWA, January 2, 2018 (LifeSiteNews) – Canada’s Prime Minister Justin Trudeau mocked and ridiculed Christians by wearing a pullover that made fun of Jesus at the Last Supper, a Conservative Member of Parliament said.

Trudeau and his brother Alexandre were photographed wearing sweaters with yellow smiley faces, or emojis, superimposed over the faces of Jesus Christ and his disciples in Leonardo Da Vinci’s The Last Supper. The large yellow faces were crowned with birthday hats. The bread and wine on the table were replaced by large slices of birthday cake. A banner over the famous scene reads “Happy Birthday.”

The photograph, which appeared a year ago on Reddit, purportedly shows Justin and his brother Alexandre celebrating their joint December 25 birthday, the same date that Christians celebrate the birth of Jesus Christ.

Da Vinci’s The Last Supper depicts Jesus revealing to his apostles just hours prior to his crucifixion and death that one of them would betray him.

The Hon. Candice Bergen, MP for Portage-Lisgar, Manitoba, took issue with the Prime Minister’s choice of apparel. She posted the photograph to social media on Saturday.

“Why does Justin Trudeau think it's ok and cool to mock and ridicule Christianity by using cartoons as the face of Jesus and his Disciples in the Last Supper?” she asked over Facebook.

“When will liberal elite like Trudeau and his friends who defend his behaviour and laugh along with him, realize how harmful and intolerant they are being to Christians?”

Bergen asked people on Social media to share the post if they “agree that Leaders in the west like Prime Minister Justin Trudeau need to start standing up for Christians instead of mocking and ridiculing their faith.”

Bergen spoke up for Christians in Canada’s House of Commons this April, pointing out that they are the “most persecuted, victimized and attacked religious group in the world today”. “Unfortunately, persecuted Christians don’t have many champions in the West,” she said. “In fact, many of the elite readily join in the mockery and the disdain shown to Christians.”

The pullover is marketed by a company called “Shelfies Inc.” as the “Happy Birthday Jesus Sweater”. Shelfies Inc. also has other products using famouse representations of Christ and a line of garments emblazoned with the features of Justin Trudeau.  The company’s web page notes that Justin Trudeau has been photographed wearing their work:

“This just in,” it enthused last June. “Prime Minister Justin Trudeau has worn another Shelfies all-over-print sweater! He was spotted on Christmas day wearing the ‘Happy Birthday Jesus’ sweater!”

“Next Christmas, wear your Shelfies with pride knowing it was blessed by the man himself: Prime Minister Justin Trudeau!”

Shelfies Inc. did not respond for a request for comment by press time.

Trudeau was baptised and raised as a Catholic but lapsed when he was 18. Although he remains a nominal member of the Catholic Church, Trudeau is a ferocious opponent to several Catholic doctrines concerning the right to life, euthanasia, and marriage.

Trudeau is so pro-abortion that he does not permit pro-life members of the Liberal Party to run for office, and he refused to condemn sex-selective abortion when pressed on the issue. Last spring Trudeau pledged $650 million of Canadian tax dollars to contraception and abortion programs in developing countries, a move for which he was upbraided by Toronto’s Cardinal Collins. That summer he encouraged the First Minister of Ireland to legalize abortion in his country after the two marched together in Montreal’s Gay Pride parade. Trudeau’s government announced in December that business who wished to take part in a summer student work program would have to pledge their fidelity to so-called “reproductive” and “transgender” rights.

Despite holding positions contrary to Catholic moral teaching, Trudeau nevertheless presents himself for Holy Communion at Catholic services. The Archbishop of Montreal, Christian Lépine, scandalized faithful Catholics by giving the Blessed Sacrament to the notoriously pro-abortion Prime Minister at a special Mass commemorating the 375th anniversary of the founding of the city of Montreal.