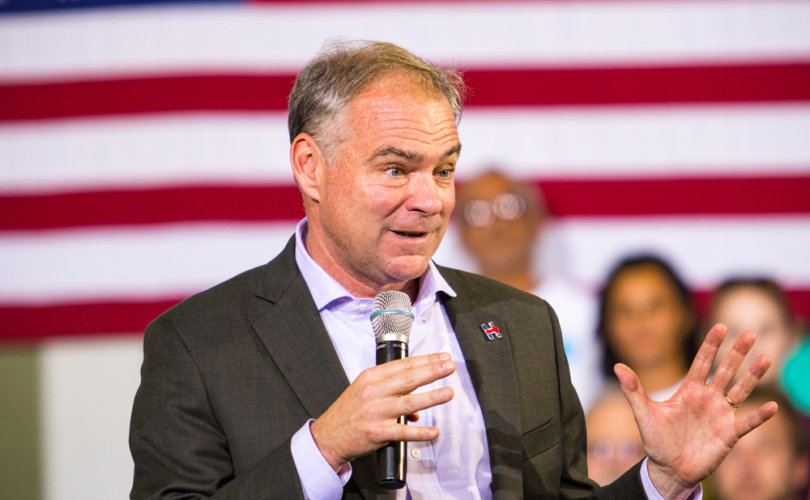 NEW YORK, November 9, 2016 (LifeSiteNews) – Democratic Vice Presidential Candidate Tim Kaine repeatedly lauded Hillary Clinton as a champion of families and children in his concession speech this morning, saying he was proud of her and quoting scripture to illustrate Clinton’s character.

“We’ve never had a president who’s made their whole career about the empowerment of families and children,” Kaine stated of the ardently pro-abortion Clinton, after praising her as a “great history maker” and her accomplishments “as a woman.”

“And I was as excited about that in the Oval Office as I was excited to have my friend Hillary there and make history as the first woman president,” he said, implying her election loss could be attributed some to prejudice against women.

“I’m proud of Hillary Clinton because she has been a history-maker in everything she has done,” Kaine said. “In a nation that is good at so many things but that has made it uniquely difficult for a woman to be elected to federal office …. ”

Clinton and Kaine both campaigned on their support for abortion, while simultaneously being quick to mention their faith on the campaign trail. Clinton is a Methodist and Kaine is a Catholic educated by Jesuits.

Kaine also quoted Scripture in his speech. He compared his late arrival to the campaign to the passage from Matthew where workers in the vineyard receive a full day’s wages no matter when they came to work.

Clinton’s rabid support for abortion, including late-term abortion – and her having plainly defended the particularly gruesome partial-birth procedure during the last presidential debate – contradict her campaign mantra of supporting families and children.

“She was inspired at a young age, an epiphany that if families and children do well that’s the best barometer for whether society does well,” Kaine said Wednesday morning before introducing Clinton for her concession speech, “and in everything she’s done she’s focused on that.”

The Virginia senator also said he was proud of Clinton “because she loves this country,” and “that love of country is something that is obvious to everybody.”

The Clinton campaign was riddled with embarrassing and scandalous revelations in the election’s later weeks through WikiLeaks emails, showing anti-Catholic bigotry among high-level campaign staffers, and loathing from Clinton herself toward average Americans.

Kaine promised supporters Wednesday morning that Clinton would persist in her agenda. “We know that the dreams of empowering families and children remain, and in that work, that important work that we have to do as a nation, it is so comforting even in a tough time, to know that Hillary is somebody until her very last breath is going to be battle for the values that make this nation great and the values that we care so deeply about.”

1
Pelosi receives Holy Communion at Mass presided over by Pope Francis
2
Pope Francis doubles down on restrictions of the Latin Mass in new letter
3
New pro-life project helps women understand what happens to their body during chemical abortions
4
Dr. Robert Malone calls out Trump administration for rushing COVID shot review
5
Princess Gloria: Global elites think they do good but actually serve the ‘prince of the world’
Subscribe to Daily Headlines »