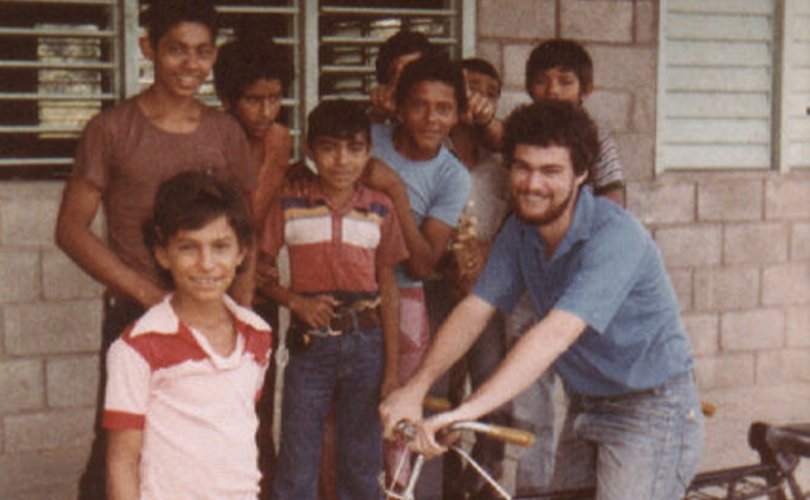 WASHINGTON, D.C., October 6, 2016 (LifeSiteNews) – With vice presidential rivals Mike Pence and Tim Kaine having taken the debate stage this week, a closer look at Kaine’s 1980 mission trip abroad so often invoked to represent his Catholic faith revealed an association on the part of the Democratic candidate with radical extremist elements hostile to the United States and the Catholic Church.

Kaine’s Honduras trip has continually been given a flattering portrayal in the media of the Virginia senator having assisted Jesuit missionaries serving poor farmers and being transformed spiritually. Kaine himself has described that time as “the turning point in my life.”

But a report from CatholicVote.org released this week sheds some new and differing light on what Kaine has also called the decisive period that helped shape both his political and religious views.

“The facts surrounding this 'mission trip' raise grave and serious concerns,” the CatholicVote memo states, “particularly given his continued relationships with the successors of a number of political and religious extremists.”

An unabashed stance on abortion

Kaine’s increasingly resolute pro-abortion stance is documented and well known, with Planned Parenthood CEO Cecile Richards saying she was “very enthusiastic” about Kaine being on the Clinton ticket.

At Tuesday night’s debate, Kaine reaffirmed his pro-abortion stance by saying of the Clinton-Kaine campaign, “We support Roe v. Wade.”

The former Virginia governor made abundantly clear during the debate that his Catholic faith takes a back seat to his role in politics, continually equating upholding Church principles with imposing one’s views on another. At the same time, he was quick to say the sole conscience issue he has had with public policy is the death penalty, misrepresenting Church teaching as wholly opposed to capital punishment.

Kaine has a 100 percent abortion voting record with Planned Parenthood and NARAL Pro-Choice America and has supported striking down pro-life laws and compelling healthcare providers to participate in abortion and supply abortifacients. He also has called himself a strong supporter of Roe v. Wade.

In a December 2011 debate for the 2012 Virginia Senate race, Kaine explained how the birth control pill can function by preventing fertilization and also by preventing implantation after fertilization has occurred. But Kaine did so to clarify why he opposed an effort to establish in commonwealth law that life begins at conception — because not only would this outlaw abortion, it would outlaw contraception as well.

Kaine has also voiced public support for women’s ordination, homosexual “marriage,” and adoption for same-sex couples, telling the largest homosexual advocacy group in the U.S. last month that the Catholic Church would change its stance on same-sex “marriage.”

Catholics’ concern over this portrayal of Church teaching

Given that Kaine has repeatedly contravened more than one of the Catholic Church’s five “non-negotiable” issues in his public life, observant Catholics have taken issue with the glowing depiction of Kaine as a devout Catholic by the media and other supporters.

They have expressed repeated concern over this and the scandal created by such instances as Kaine’s invoking Pope Francis to support Planned Parenthood funding in the Zika aid bill, his opposing the federal 20-week fetal pain abortion ban, advocating for ObamaCare, and rallying so-called Pope Francis Catholics to vote for Hillary Clinton.

Added to his firm support for abortion and other issues in conflict with Church teaching, Kaine explicitly embraced the controversial and extremist liberation theology during his spiritually transforming trip to Honduras with the Jesuits, according to information from CatholicVote and several media outlets.

Kaine touted the Honduras trip again in the debate Tuesday night when asked about the role faith plays in his life, saying, “And I worked with Jesuit missionaries in Honduras, now nearly 35 years ago, and they were the heroes of my life.”

The CatholicVote memo details how Kaine associated with one of the ideology’s most radical proponents, Father James Carney — a Jesuit priest who believed violence was God’s plan for social and political change. Carney renounced his U.S. citizenship and left the order to be a guerrilla fighter, which would lead to his death.

“I invite all Christians who read this to get rid of any unfair and un-Christian prejudices you have against armed rebellion, socialism, Marxism and communism,” the CatholicVote memo quotes from a book written by Father Carney. “There is no contradiction whatsoever between being a Christian and a priest, and being a Marxist revolutionary.”

Additional troubling details are cited in the report about the priest, whose radical views were well known and who was an exiled radical Marxist when Kaine sought him out by taking a bus trip to Nicaragua and walking several miles.

Kaine also maintains a relationship with the radical priest’s successor at the radio outlet founded by Father Carney before his death. Radio Progresso is described in the memo as socialist-inspired.

Jesuit Father Ismael Moreno Coto (‘Father Melo’), who has called for land redistribution in Latin America, told Radio Progresso listeners in 2015 “to follow [Father Carney’s] footsteps and memory of struggling to continue to build a more just and equitable society.”

The priest was also a commentator on Kaine for Univision during the Democratic National Convention.

“Given Father Carney’s identification with terrorists and his participation in an armed invasion of Honduras, Father Melo’s call to action begs an important question: Has Father Melo disavowed the radical agenda of his predecessor?” CatholicVote asks. “And what is Tim Kaine’s relationship today to the Melo/Carney ideology?”

CatholicVote’s report also details specifics of the ties between liberation theology and the Soviet bloc and its efforts to attack and undermine the Church.

The Marxist components of liberation theology were condemned in the 1980s and 1990s by the Vatican, the memo says, the same time that Kaine was in Latin America associating with radicals who espoused it. According to the New York Times report, this “theology” put him on a “left-veering career path” influencing his politics to the present day.

Pope John Paul II, Pope Benedict XVI, and Pope Francis have all opposed the radical Marxist nature of liberation theology, the CatholicVote memo notes, and, “To the extent liberation theology today has been rehabilitated or gets any Vatican tolerance or support, it does so only by denying its Marxist elements.”

The Marxist-socialist ideology that Kaine embraced in Honduras complicates the narrative given the public of a goodwill humanitarian missionary trip, the CV memo says, concluding, “Catholic voters and all Americans deserve to know the truth about Kaine’s political philosophy and the role that revolutionary Marxist theology played and may continue to play in the shaping of his political views today.”