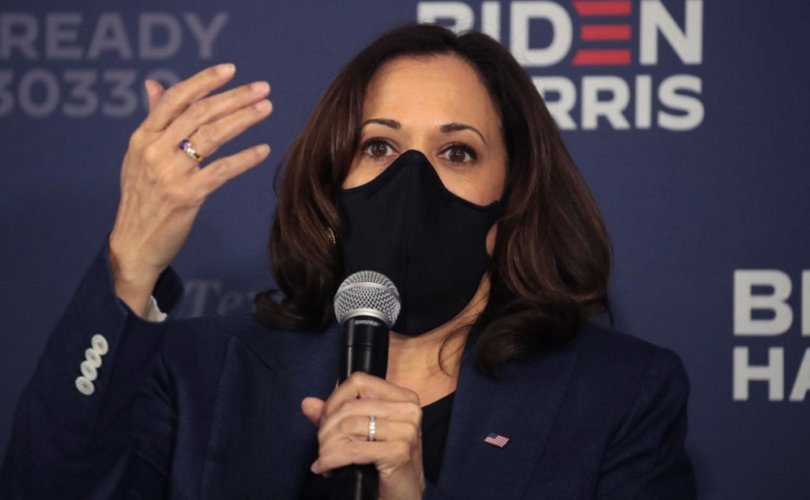 September 8, 2020 (LifeSiteNews) – The mainstream media traditionally paint conservatives as “anti-science” over criticism of certain vaccines and mandatory vaccination policies, but Democrat vice presidential nominee Kamala Harris just flipped that narrative on its head by suggesting an upcoming COVID-19 vaccine should be distrusted because President Donald Trump presided over its development.

“I will say that I would not trust Donald Trump and it would have to be a credible source of information that talks about the efficacy and the reliability of whatever he's talking about,” Harris told CNN Sunday, when asked whether she would take a coronavirus vaccine approved and released by the Trump administration prior to the November election.

Harris further claimed that medical professionals who want to slow down development out of safety concerns will “be muzzled, they'll be suppressed, they will be sidelined,” because Trump is “looking at an election coming up in less than 60 days and he's grasping to get whatever he can to pretend he has been a leader on this issue when he is not.”

Public health officials, including Food & Drug Administration (FDA) commissioner Stephen Hahn and Centers for Disease Control (CDC) director Dr. Robert Redfield have publicly discussed expediting the normal vaccine development process by seeking that certain permit requirements be waived and possibly skipping “Phase III” testing for “emergency use authorization” use instead of full approval, but they insist safety will not be compromised.

Immunologist Moncef Slaoui, leader of the COVID-19 vaccine development initiative, told Science Magazine “there has been absolutely no interference” with his work so far. He claimed that he would resign if an emergency use authorization was demanded without the science warranting it.

In the United States, COVID-19 has infected an estimated 6.4 million people and killed an estimated 193,000, disproportionately affecting those aged 64 and above.

While the public has yearned for a cure, voices on both sides have expressed concern about a vaccine being rushed to the public, followed by compulsory vaccination before any potential complications are ironed out. Various state officials and academic institutions across the country have discussed mandating an eventual COVID-19 vaccine, and Yale University is currently studying what messages have the most potential to shame people into submitting.

“Fear of a disease – which we know very little about, relative to other similar diseases – must not lead to knee-jerk reactions regarding public health, nor can it justify supporting the hidden agenda of governmental as well as non-governmental bodies that have apparent conflicts of interest in plans to restrict personal freedoms,” says LifeSiteNews’ ongoing petition against mandatory COVID-19 vaccination, which has gathered more than 860,000 signatures.