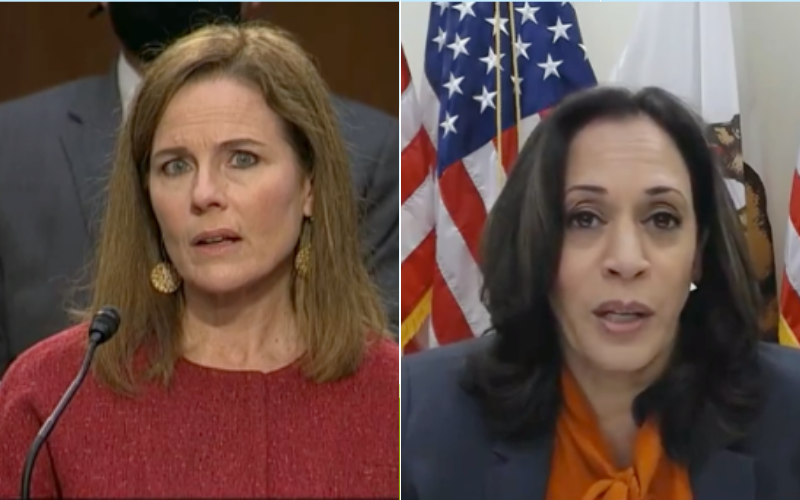 Harris, who was recently named the “most liberal Senator” in the entire U.S. Senate by GovTrack.us, also submitted to the congressional record three documents opposing Barrett’s nomination. Two were from the NAACP and one was from the Planned Parenthood Federation of America, the notorious abortion giant that has given Harris large amounts of campaign donations ever since she served as Attorney General of California.

During her allotted time, Harris lamented the fact that “[Justice] Ginsburg’s seat” was being filled by a president who has said his judicial nominees would overturn Roe v. Wade. Appearing annoyed by the possibility that a leader of “women's’ equality” would be replaced by someone who opposes abortion, Harris pointed out that Barrett had previously expressed disagreement with Roe. Harris suggested it was already a foregone conclusion on how Barrett would rule on future cases.

“Your record clearly shows you hold a different view [than Justice Ginsburg],” Harris said. “I would suggest we not pretend that we don’t know how this nominee views a women’s right to choose and make her own healthcare decisions.”

Unlike her Democratic colleagues who earlier in the day had extensive back-and-forth discussions with Barrett on Roe, Harris barely engaged her during her platitude-heavy remarks. Harris spent the first 20 minutes of her time repeating campaign themes and echoing claims marshaled by other Senate Democrats about how sick Americans may very well die if Barrett is confirmed.

Many conservatives expected Harris to take a more combative stance with Barrett, especially given her high-profile status as Joe Biden’s running mate, but that was largely not the case Tuesday night. Harris participated in the hearing virtually, and yesterday experienced technical difficulties during her opening statement.