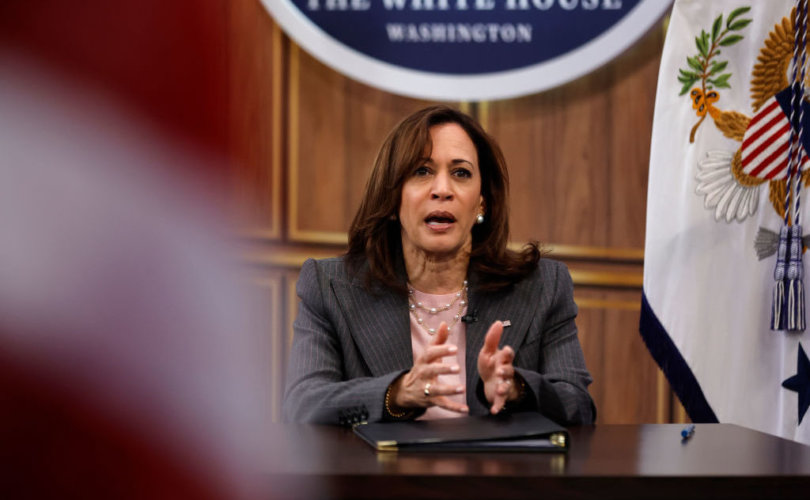 WASHINGTON, DC - MAY 19: U.S. Vice President Kamala Harris delivers brief remarks at the beginning of a virtual meeting of abortion providers in the South Court Auditorium of the Eisenhower Executive Office Building on May 19, 2022 in Washington, DC. Harris talked about the prospect of the landmark Roe V. Wade decision being overturned by the Supreme Court and how that would undo almost 50 years of legal precedence. (Photo by Chip Somodevilla/Getty Images)Chip Somodevilla/Getty Images

WASHINGTON, D.C. (LifeSiteNews) – Vice President Kamala Harris told CNN’s Dana Bash on Monday that parents of boys should think about how the reversal of Roe v. Wade could affect their lives.

After saying that she had considered the decision in terms of how it could affect her “son and daughter” and as “an aunt of preschool children,” she told parents to think of how it could impact their own kids.

“First of all, if you are a parent of sons, do think about what this means for the life of your son and what it will mean in terms of the choices he will have,” Harris told the CNN interviewer.

“Do think about it in the context of the fact that they wrote this decision,” she said. Harris then mentioned “concurring opinions, that suggests that other rights such as the freedom to make decisions about when you’re going to start a family, the freedom and the right to make decisions about contraception, IUDS, what this is going to mean in terms of in-vitro fertilization.”

The majority opinion, written by Justice Samuel Alito, made clear the ruling on Friday only applied to abortion. However, Justice Clarence Thomas wrote a concurring opinion that argued the Supreme Court should reconsider past rulings that relied on “substantive due process” such as that decisions that required all states to recognize same-sex “marriage” and allow sodomy and contraceptives.

“You mean, like he’ll have to take responsibility for his children and become a father, rather than cough up $500 for a hasty abortion or, worse, coerce the mother of his child into choosing abortion so he can get himself off the hook?” National Review reporter Alexandra DeSanctis Marr wrote on Tuesday in response. “It’s on occasions like this when I wonder if the vice president can even hear herself.”

I know some horrid consultant told Dems to try to make aborting babies into a “men’s issue” but this is just ghastly and grisly. We should be raising men who understand that loving & supporting your kids is a sacred duty & wondrous blessing—not an inconvenience to be terminated.

“I know some horrid consultant told Dems to try to make aborting babies into a ‘men’s issue’ but this is just ghastly and grisly,” he tweeted in a response to the clip of Harris talking. “We should be raising men who understand that loving & supporting your kids is a sacred duty & wondrous blessing—not an inconvenience to be terminated.”