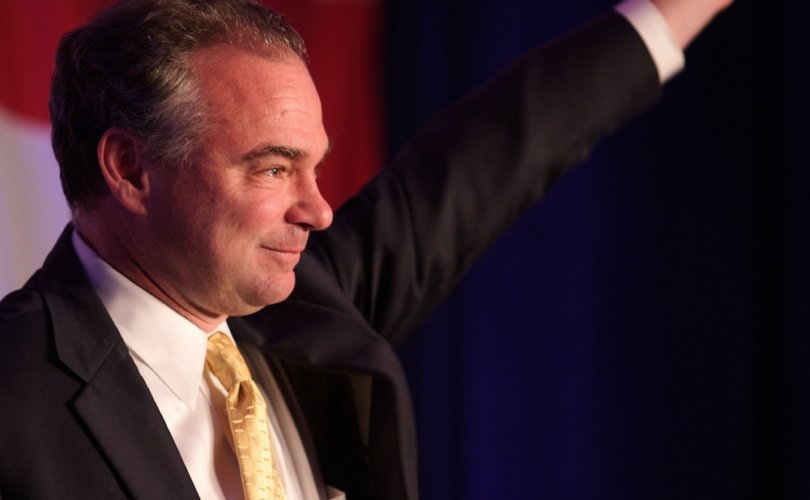 Kaine is an “orthodox” Democrat but only a “cafeteria Catholic” who picks and chooses “the teachings of the Catholic Church that are politically convenient,” Archbishop Joseph Naumann wrote in a devastating critique of the Virginia senator.

“It was painful to listen to Senator Kaine repeat the same tired and contorted reasoning to profess his personal opposition to abortion while justifying his commitment to keep it legal” during the vice presidential debate, Naumann wrote in the diocesan newspaper, noting that Kaine grew up nearby and credits his Jesuit high school “with instilling within him a desire for public service and a commitment to advocate for the poor.”

“He said all the usual made-for-modern-media sound bites: It is not proper to impose his religious beliefs upon all Americans. He trusts women to make good reproductive choices,” Naumann wrote. “And when all else fails, there is always: Do we really want to criminalize and fill our jails with post-abortive women?”

Naumann brought to the faithful’s attention that Kaine “appears to have no qualms with his public position conforming with his religious beliefs” on the Church’s treatment of the poor and opposition to racism. “He appears not to be conflicted with our public policies mirroring the Ten Commandments with regard to stealing, perjury, or forms of murder, other than abortion.”

“It is ironic that Senator Kaine expressed such profound concern about imposing his religious beliefs on others, while supporting efforts: 1) to coerce the Little Sisters of the Poor and other faith-based ministries to violate their conscience by including abortifacients, contraceptives and sterilizations in their employee health plans; 2) to put small business owners (e.g., florists, bakers, photographers, etc.) out of business with crippling fines if they decline to participate in same-sex marriage ceremonies; and 3) to force every American taxpayer to help fund abortion,” he added.

Furthermore, Naumann wrote that he’s “not aware” of a single pro-life effort Kaine made as governor of Virginia. “He appears eager to champion not only maintaining the status quo but actually expanding abortion rights,” the archbishop wrote.

This is the “real flaw” with Kaine’s claim that he personally opposes abortion, according to Dominican Father Thomas Petri, a theologian and academic dean at the Pontifical Faculty of the Immaculate Conception at the Dominican House of Studies. “There’s no evidence of it,” the priest tweeted.

Archbishop Naumann of @archkck reveals the real flaw of @timkaine’s “personally opposed to abortion” position: there’s no evidence of it. pic.twitter.com/6747t79cQ7

It does not “require faith” to believe self-evident truths about human rights, Naumann wrote, attacking Kaine’s implication that only religious people are opposed to abortion.

“Why is Senator Kaine personally opposed to abortion if he does not believe that it is the taking of an innocent human life?” Naumann asked. “I hope in his science classes at Rockhurst [High School] he learned that at the moment of fertilization a new human life has begun with his or her own distinct DNA — different from the genetic code of both the child’s mother and father.”

“If he knows these truths of biology, why would he believe that anyone has the right to authorize the killing of an unborn human being?” the archbishop continued. “This is where the reproductive choice euphemism breaks apart. Does anyone really have the choice to end another human being’s life? Our choices end where another individual’s more fundamental rights begin.”

Kaine’s claim that post-abortive women will be jailed if abortion is outlawed are demonstrably false, Naumann argued, because “we actually have decades of legal history in our own country when this was certainly not the case.”

“It is difficult to find a single instance of a woman imprisoned for abortion” before the late 1960s, when it was illegal almost everywhere in almost every case. “The laws were enforced against the abortionists,” he explained. It is “clearly … possible to develop public policies aimed at protecting children, not punishing women.”

Furthermore, Naumann suggested it would benefit Kaine to meet with some of the many post-abortive women who face “an inner imprisonment where the bars keeping them from freedom and happiness are the guilt and unresolved grief that inevitably ensues from abortion.”

Naumann exhorted Catholics to remember that voting means choosing “not just a president but an entire administration.” The candidates of both major parties are “very flawed,” but when voting, “I encourage you to think not only of the candidate, but who they will appoint to key Cabinet and other powerful government positions if he or she becomes president,” he wrote.

“Be wary of candidates who assume to take upon themselves the role of defining what Catholics believe or should believe,” Naumann concluded. “Unfortunately, the vice presidential debate revealed that the Catholic running for the second highest office in our land is an orthodox member of his party, fulling embracing his party’s platform, but a cafeteria Catholic, picking and choosing the teachings of the Catholic Church that are politically convenient.”