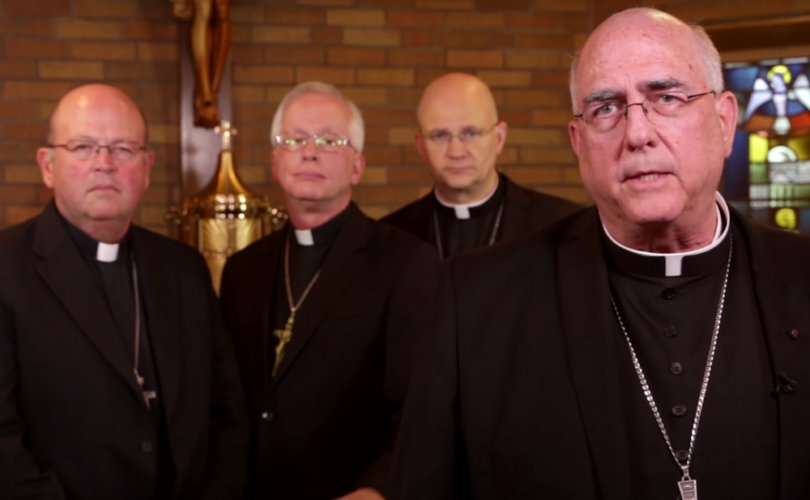 KANSAS, September 29, 2016 (LifeSiteNews) — In a video on Catholic voting, the bishops of Kansas instructed the faithful to “place special emphasis on those issues where Catholics must speak with a unified voice because of the reality that certain laws directly contradict Church teaching, the natural law, and the good of society.”

The video featured Archbishop Joseph F. Naumann of the Archdiocese of Kansas City in Kansas, Bishop John B. Brungardt of the Diocese of Dodge City, Bishop Carl A. Kemme of the Diocese of Wichita, and Bishop Edward J. Weisenburger of the Diocese of Salina. In the video, the bishops also said that Catholic voting should involve bringing a “Catholic viewpoint” to the immigration debate and should promote “good stewardship of the environment.”

Brungardt said that many issues, like immigration and healthcare, must be considered “in light of Catholic social teaching,” but Catholics might not agree on policy for addressing such social problems. However, “our political preferences should be shaped by the application of Catholic moral principles to current circumstances,” he said.

As such, Brungardt said, “All Catholics have a moral obligation to keep [the] human rights catastrophe” of abortion “at the forefront of their minds when voting.”

“In our country, over one million unborn children are killed by abortion every single year,” he said.

The bishops warned that government agencies are increasingly “attempting to punish individuals and institutions that adhere to the truth that marriage can only be between a man and a woman, and that every child deserves a mother and a father.” They noted the role judges play in this crackdown.

Elaborating on this point, in a September 23 diocesan newspaper column titled In choosing presidents, we choose judges, too, Naumann wrote that “life is full of imperfect choices.”

Judges’ roles “determining public policy on such fundamental issues as abortion, the definition of marriage and the protection of conscience rights and religious liberty” have increased, the archbishop wrote. “Some judges have chosen to decide important social issues by inventing rights not found in the Constitution. They have disenfranchised Americans by usurping the responsibility of our elected representatives to determine public policy in these crucial areas.”

“In my opinion, one of the most significant responsibilities of the president is the appointment not only of Supreme Court justices, but all federal judges,” he continued. “Since more and more public policy issues are being decided by the courts — not the Congress or the state legislatures — the selection of judges has become extremely important.”

“The U.S. Supreme Court, just a little more than a year ago, redefined marriage, striking down the vast majority of state constitutions and legislation that recognized marriage as it has been understood for millennia between one man and one woman,” Naumann wrote. He also cited the Supreme Court’s refusal to hear the case of Washington state pharmacy owners who declined to provide customers with abortifacient drugs and Skagit County Superior Court’s ruling “that public hospitals in the state of Washington must perform abortions if they also offer maternity care, even if all of the hospital’s doctors and other medical staff conscientiously object to performing abortions.”

In addition to judges, the people appointed to a president’s cabinet play a significant role in shaping policy, Naumann continued. He cited the HHS contraception and abortion mandate, the Department of Education’s recent threatening of Catholic colleges with the loss of federal financial aid unless they allow men in women’s restrooms and vice versa, and the Health and Human Services Office for Civil Rights declaration “contrary to the plain meaning of current federal law, that California’s Department of Managed Health Care may continue to force private health plans to cover elective abortions” as examples of the power the federal government can wield through its different agencies.

“The president of the United States exercises enormous power by his or her appointments to the court, the Cabinet and federal agencies and commissions,” Naumann wrote. “Remember: In choosing a president, we are also choosing judges as well as bureaucrats who will interpret legislation by the manner in which they choose to implement it.”

He implored Catholics to pray for America.

Some of the points Naumann’s raised are similar to what Priests for Life National Director Father Frank Pavone told LifeSiteNews in a series of interviews about Catholic voting.

When voting for president, “You are also putting someone in the office of the Secretary of State, the Surgeon General, the Attorney General, the Secretary of [Health and Human Services], and in fact thousands of positions in the federal administration — not to mention that you’re also putting a certain type of person on the Supreme Court, and on all the other federal courts that decide so many issues of public policy,” Pavone said.

– Don’t buy Satan’s lies: Only one political party aligns with the Church on the most basic issues
– Priest: ‘You might not have a church to go to if you don’t vote the right way in November’
– WATCH: Fr. Pavone on why Catholics can’t sit out the election