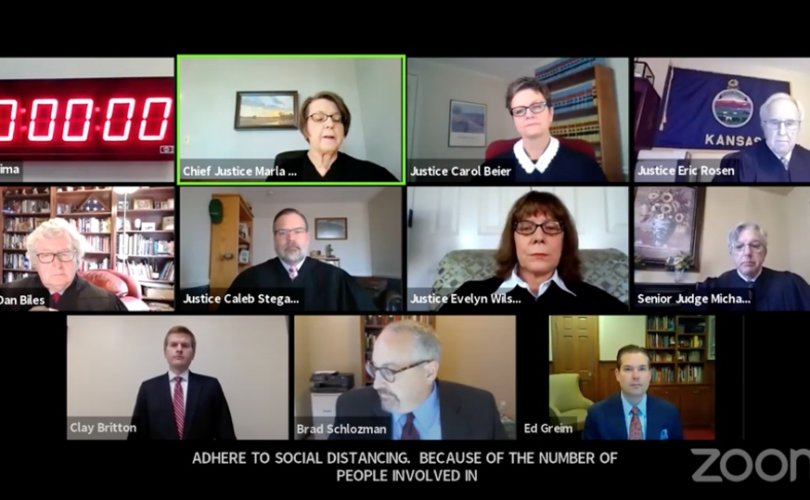 A statement released by the court made clear that this was a narrow decision, focused only on whether the governor had acted within her rights, and not on whether her action infringed on religious freedom.

After hearing arguments electronically this morning in Kelly v. Legislative Coordinating Council et al., the Court ruled swiftly and narrowly, relying on the plain language of House Concurrent Resolution No. 5025. The Court said the revocation could not stand, because the resolution failed to give the LCC the necessary power to override the Governor's order.

The Court's decision did not address several other issues that had been mentioned in the parties' written filings—including whether the Legislature's attempt to give the LCC authority to act while it was away from Topeka was lawful and whether the Governor's order infringed on religious freedom.

The majority opinion, written for the Court and not signed by an individual justice, said: “As ultimately acknowledged by all counsel during oral arguments today, even if we accept House Concurrent Resolution 5025 as an otherwise valid exercise of legislative authority, its plain text did not authorize the LCC to revoke Executive Order 20-18.”

“The legal arguments hashed out in a Zoom video conference call some 12 hours earlier centered mostly on whether a subset of legislative leaders could speak for all lawmakers and overrule emergency actions by the governor,” explained Kansas News Service senior correspondent Jim McLean. “They also explored whether drafting errors in the legislation could be overlooked in an emergency.”

“The back-and-forth between the justices and the lawyers for both sides seemed to reveal at least some consensus: In a rush to leave Topeka and give Kelly powers to respond to a fast-spreading, sometimes deadly illness, the Legislature made critical errors in a resolution,” said McLean.

“Yes, lawmakers had temporarily granted emergency powers to the governor,” he said. “But it was far less clear how much authority they handed off to the Legislative Coordinating Council, a committee of legislative leaders controlled by Republicans, to keep Kelly in check.”

A delegation of power of that magnitude, said Justice Dan Biles, can’t be accomplished with just a legislative resolution. The law defining the role of the LCC would have to be amended, something lawmakers failed to do.

“You’re trying to read language into a statute that’s not there,” Biles said to one of the lawyers pleading the Legislature’s case. “While it may be a good idea, all you guys had to do was amend the law and send it to the governor.”

At the outset of the unusual Holy Saturday session, Chief Justice Marla Luckert said, “Today is a historic day as we hear arguments for the first time by video conferencing.”

“Because of the COVID-19 pandemic, [Kansas] courts are operating under emergency orders to protect the health and safety of litigants, the general public, and our employees and judicial officers. Under those orders, courts may not conduct in-person hearings, even in the performance of an essential function if they cannot adhere to social distancing requirements and other public health orders,” she explained.

The Kansas State Supreme Court’s ruling can be found here.