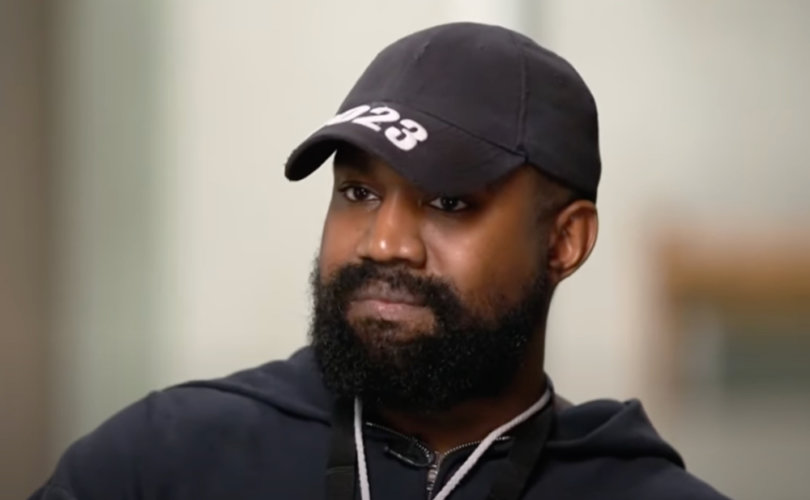 (LifeSiteNews) – Internationally renowned rap star Kanye West touted his pro-life views in an interview with Tucker Carlson, accusing the pro-abortion movement of enacting a “genocide of the black race.”

During the October 6 interview, West wore a lanyard around his neck with an ultrasound picture of an unborn child on it. When Carlson asked him what that meant West replied “It just represents life, I’m pro-life.”

The Fox News host then asked West what kind of responses he gets for wearing it, to which the rapper replied:

Carlson responded to West’s statement by saying “I’m starting to see why they want to make you be quiet.”

(Some mainstream media outlets have taken issue with West’s 50% claim. LifeSiteNews has long reported on the open racism of many of the leading abortion pioneers such as Planned Parenthood founder Margaret Sanger, and on the strikingly high rate of abortions in African-American communities. Due to longstanding inconsistencies and limitations in how they are reported, U.S. abortion statistics can be challenging to neatly summarize. We have provided a short summary of some relevant recent abortion statistics at the bottom of this article.)

When asked about when he began to feel that way, the 45-year-old rapper said he “started to feel this need to express myself when Trump was running for office and I liked him.” He recalled that “every single person in Hollywood, from my ex-wife, to my mother-in-law, to my manager at that time, my so-called friends/handlers around me told me that if I like Trump, my career would be over, my life would be over.”

“They said stuff like ‘people get killed for wearing a hat like that’,” West continued, referring to a MAGA hat.

West also addressed his recent political stunt of wearing shirts that read “White Lives Matter” at a fashion show in Paris earlier in the week. This had sparked outrage and accusations of racism by the mainstream media.

“Someone called me last night and said anybody wearing a White Lives Matter shirt is gonna be green lit. And that means they are gonna beat them up if they wear it,” West told Carlson. “And I’m like ‘okay, green light me then.’ You know, God builds warriors in a different way.”

— Article continues below Petition —
Demand that the Archdiocese of Indianapolis let Kim Zember speak!
Show Petition Text
5013 have signed the petition.
Let's get to 6000!
Thank you for signing this petition!
Add your signature:
Show Petition Text

When asked by the Fox News host about why he chose to wear the shirt, West said: “I do certain things from a feeling, I just channel the energy if it feels right. It’s using a gut instinct in connection with God and just brilliance.”

Later in the interview West elaborated that he thought the idea of him wearing the shirt was funny and that “the answer for why I wrote White Lives matter on a shirt” is “because they do. It’s the obvious thing”

Media has a ‘godless agenda’

While elaborating on the issue of his White Lives Matter shirt, the Hip-Hop artist blasted the mainstream media, and accused the media of passively watching “travesty” happen:

We are in a battle with the media. The majority of the media has a godless agenda. And their jokes are not working. They say oh ‘Ye is crazy.’ But all these things, they don’t work. Because the media has also watched travesty happen, that’s even specifically to me and just watch it and act like it wasn’t happening. And they stayed quiet about it.

Furthermore, West talked about how being overweight is unhealthy and promoting such a lifestyle is “demonic.”

After West described the promotion of being overweight as “demonic,” Carlson asked the rapper why he thought such a lifestyle was being normalized.

“It’s a genocide of the black race” claimed West, about the promotion of unhealthy lifestyles. “They wanna kill us in any way they can. Planned parenthood was made by Margaret Sanger, a known eugenics, with the KKK, and I believe that if we saw ourselves more as a people, and not a race then we would treat our people better.”

Sanger was a eugenicist who advocated for abortion and contraception, and founded the American Birth Control League in 1921, which served as the precursor to the Planned Parenthood Federation. Sanger said, among other atrocious things, that she wants to “exterminate the Negro population.”

West also claimed that his ex-wife, Kim Kardashian, had close ties with the Clinton family – ties of which he was unaware. He insinuated that the Clintons asked Kardashian to use her platform to push the COVID vaccines.

Stating that Kim’s relationship with the Clintons was just a “cell-phone away,” West said calls might go along the lines of “‘hey tell Ye to say this’ away or ‘hey go out and use your platform to push the vaccination’ away. I mean not away, but like stick the away part,” West told Carlson.

In a different section on his show, Carlson explained that the media has tried to label West as crazy because the artist goes against the mainstream narrative. West “has his own ideas,” said Carlson, adding that “his free-form social media post gives the impression of a man channeling his rawest emotions right onto Instagram,” which is “often used as ammunition against him in the battle for influence over the minds of America’s young people.”

“But crazy? That was not our conclusion,” the Fox News host continued. “In fact, we’ve rarely heard a man speak so honestly and so movingly about what he believes. But again, you can judge for yourself.”

2020 statistics from the U.S. Centers for Disease Control & Prevention (CDC) state that 449,213 black, non-Hispanic Americans died in 2020, while its most recent abortion statistics (2019) find 132,878 abortions among the same demographic group, which comes to 38.4% of all abortions and equals just under 30% of the recognized black death count. (Black abortions make up 23% of the combined recognized deaths and abortion deaths, per the CDC.)

However, in a long-recognized limitation of national abortion data, the CDC admits that it only collects abortion information voluntarily submitted by states, whose reporting requirements (if any) vary significantly. California, Maryland, and New Hampshire — three relatively abortion-friendly states, with California being the most populous in the nation — do not submit any abortion data, making the official numbers much lower than the reality.

More comprehensive sources such as the Johnston Archive, which employs additional data sources such as state health agency reporting and estimates from the pro-abortion Guttmacher Institute, suggests a much higher abortion trend among black Americans, with 295,000 abortions estimated in 2017. That equals almost 66% of the recognized count of all black deaths, even higher than West’s estimate. (Black abortions make up 40% of the combined recognized deaths and abortion deaths, per Johnston.)