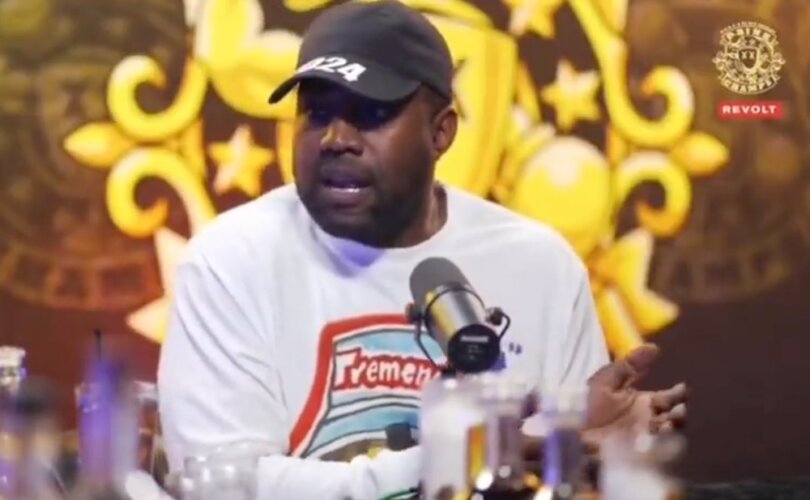 (LifeSiteNews) — Pro-life rapper Kanye West, a controversial and unpredictable public figure who has nonetheless earned the friendship of prominent conservatives for his support for President Donald Trump and willingness to speak out in defense of the preborn, called Planned Parenthood a “Holocaust museum” in a turbulent interview that aired Saturday.

The prominent celebrity, who has often pointed out that a disproportionate number of black babies are killed through abortion in the United States, made the remarks during an interview with Revolt TV’s Drink Champs hosted by N.O.R.E. and DJ EFN and released October 15.

West has frequently spoken out against Planned Parenthood and accused the abortion giant of “black genocide,” kindling the ire of pro-abortion advocates in the media.

Earlier this month in an interview with Tucker Carlson, West decried the fact that more black babies are aborted than born in New York City, and that black women and their babies are disproportionately represented in U.S. abortion rates.

The celebrity has also drawn attention to the anti-black eugenicist sentiments of Planned Parenthood founder Margaret Sanger, who admitted she wanted to “exterminate” the black population through abortion and birth control.

The conversation covered a range of other controversial topics, including the death of George Floyd and West’s recent appearance with Daily Wire podcast host Candace Owens at a fashion show where the two wore provocative “White Lives Matter” shirts.

In recent weeks, the 45-year-old celebrity sparked vehement pushback not only for the shirts but also for a series of messages deemed anti-Semitic, including a tweet in which he threatened to go “death con 3 on Jewish people.”

On Saturday, West said that Charney, who printed the “White Lives Matter” shirts, has subsequently refused to release them for sale after West was temporarily banned from Twitter over the controversial tweet. According to the rapper, Charney had pushed back against him over the tweet and suggested the rapper should visit the Holocaust Museum. In response, West told Charney he should visit Planned Parenthood, “our Holocaust museum.”

An inconsistent figure, however, West has often veered in his remarks, drawing backlash from both sides of the political aisle over some of his more incendiary opinions.

In the October 15 interview, West made a series of disparaging comments about “Jewish media,” “Zionists,” and so-called “Jewish business secrets,” accusing Jewish executives in the entertainment industry of undercutting his career and promoting immoral lifestyles.

The prominent black celebrity also repeated a claim mentioned in his most recent controversial tweet that he couldn’t be anti-Semitic “because black people are actually Jew.”

The notion that black people are “the real Jews” is linked to Black Hebrew Israelite movement, which originated in the late 19th century and suggests that the lineage of modern-day African Americans can be directly traced back to the ancient Israelites.

In unaired footage leaked to left-wing outlet Vice last week, West told Tucker Carlson that “When I say Jew, I mean the 12 lost tribes of Judah, the blood of Christ, who the people known as the race black really are.”

It’s unclear why West, a self-described Christian, appears to have adopted the view. However, Bruce Haynes, author of “The Soul of Judaism: Jews of African Descent in America,” suggested that while the Hebrew Israelite belief fails to stand up to a historical analysis, it’s not necessarily anti-Semitic in itself.

“Is it anti-Semitic to say Black people are the real Israelites or the real Jews? I’m not sure I’d call it anti-Semitism,” Haynes told the Associated Press in 2020. Haynes added that the view is “not a good reading of history” and explained that while it’s not necessarily hateful to people of Jewish descent, the “groups that call Jews impostors certainly cross the line.”