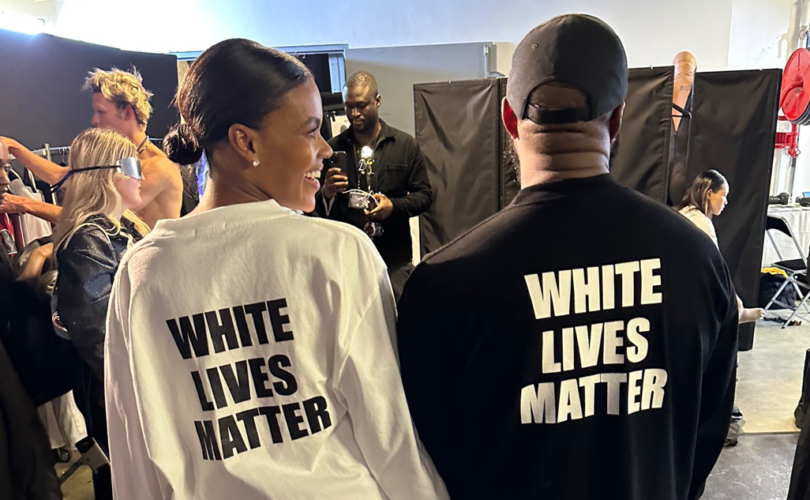 (LifeSiteNews) — Conservative politico Candace Owens and hip-hop musician Kanye West have sparked outrage from the Marxist-led Black Lives Matter movement for wearing shirts that had the phrase “White Lives Matter” printed on the back.

At a Paris fashion show hosted by West on Monday, both Owens and West publicly donned shirts that featured Pope John Paul II on the front, with the slogan “White Lives Matter” emblazoned on the back. Immediately after the political stunt, Black Lives Matter and other left-wing activists took to social media to accuse the duo — who are both black — of racism.

“Kanye knows very well that ‘white lives’ have never been targeted for oppression,” wrote Black Lives Matter in a statement addressing the matter. “Black folks, in contrast, are at the bottom of virtually every economic, social, and political measure because of centuries of individual and institutional racism.”

“While some may see Kanye and Candace’s stunt as a distraction, we recognize that it harms thousands of families fighting for justice for their loved ones killed by state-sanctioned violence,” added the group.

While the group appears as a grassroots political and social movement, in reality it has received tens of millions of dollars from globalist organizations and actors like the Ford Foundation and Democrat billionaire George Soros.

Moreover, while the group received millions in donations from private citizens under the pretense that the money would be used to help disadvantaged black Americans, the organization’s tax filings show that $12 million dollars were spent buying luxury homes in Los Angeles and Toronto.

Responding to the backlash caused by the shirts, West wrote on social media Tuesday morning: “Everyone knows ‘Black Lives Matter’ was a scam. Now it’s over. You’re welcome.”

Owens, who works for the Daily Wire and has a history of opposing BLM, likewise defended the shirts the following day.