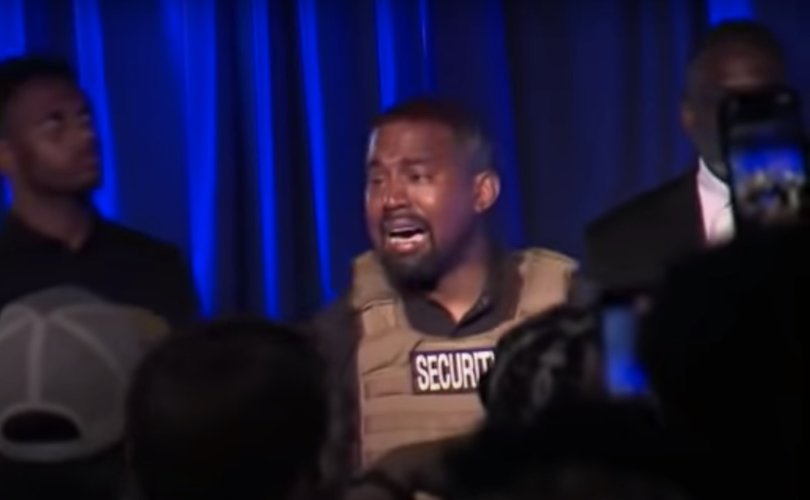 NORTH CHARLESTON, North Carolina, July 20, 2020 (LifeSiteNews) – Rapper Kanye West held the first “campaign stop” of his announced presidential bid this weekend, during which he emotionally confessed how close he and his then-girlfriend Kim Kardashian came to aborting their first child … while maintaining the practice should remain legal.

“In the Bible it says thou shalt not kill,” West told the North Carolina crowd, E! Online reported. “I remember when my girlfriend (at the time) called me screaming and crying (…) And I just thought to myself, 'Please don't tell me I gave Kim Kardashian AIDS.’ Then, she said, 'I'm pregnant' and I said, 'Yes.' (…) she said 'No.' She was crying… (and) said she had to go to the doctor.”

“And for one month, and two months and three months, we talked about her not having this child,” he continued, adding there came a time when Kardsashian “had pills in her hand. You know, these pills you take it and it's a wrap — the baby is gone.”

“She said, 'We are going to have this child,’” West went on. “I know people who are 50 years old who don't have a child. So even if my wife were to divorce me after this speech, she brought North into the world, even when I didn't want to. She stood up and she protected that child.”

“I almost killed my daughter!” West emotionally confessed, crying. “I love my daughter!” North West, the first of the couple’s four children, was born on June 15, 2013.

The rapper added that abortion is personal to him from the other end of the equation, as well. “Forty-three years ago, who do you think protected a child? My mom saved my life,” he said. “My dad wanted to abort me! My mom saved my life. There would have been no Kanye West.”

Even so, West said abortion should remain legal, the Associated Press noted. Instead of banning it, he suggested instituting financial incentives for mothers to keep their babies. “Everybody that has a baby gets a million dollars,” he floated as an example.

The comments are the latest manifestation of the rapper’s apparent transformation in recent years, starting with his praise of President Donald Trump in 2018 and conversion to Christianity the following year. West has spoken out against abortion in the past, and criticized the idea that blacks and Democrats should be natural allies.

West announced his presidential ambitions on July 4. In a wide-ranging interview with Forbes, he suggested he has soured on Trump ever since “I caught wind that he hid in the bunker” during the Black Lives Matter riots in Washington, D.C., though he also panned Biden as “not special.” He was also candid about his lack of expertise, promising that his “answer for anything that I haven’t researched” will be to consult with “the strongest experts that serve God and come back with the best solution.”

It’s still unclear how serious West is about actually running for president. A search for “Kanye West” on the Federal Election Commission website auto-populates with two variations of the rapper’s name, neither of which when clicked has a financial summary currently available, as well as a PAC. He has also missed the filing deadline to appear on the ballots of at least six states.

TMZ and Entertainment Tonight report that Kim Kardashian is displeased with West’s decision to disclose the couple’s past contemplation of abortion, and that sources close to the family “believe Kanye is in desperate need of professional help and is in the middle of a serious bipolar episode, but he won't listen to them.”