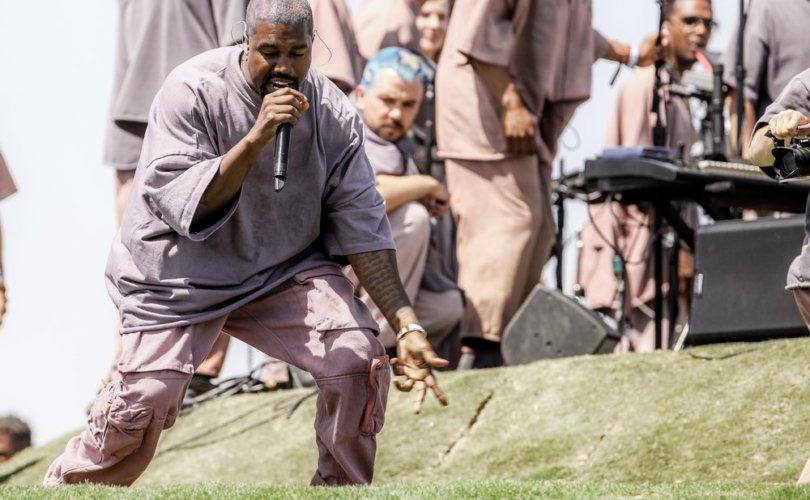 Update July 9, 2020, 10:28 a.m. EST: Kanye West tweeted and then deleted a screenshot of a Google search for “what does a 6 month fetus look like”. Along with the now-deleted image, he wrote, “These souls deserve to live”.

July 8, 2020 (LifeSiteNews) – Despite admitting he has never voted in his life, Kanye West says he is running for president in 2020. He has given an interview to Forbes about his newfound political views, which include opposition to Planned Parenthood and abortion, support for school prayer, and hesitancy about a coronavirus vaccine.

The rapper, whose conversion to Christianity and Jesus is King album stunned the world in 2019, initially began voicing support for President Donald Trump in 2018.

West’s wife Kim Kardashian and their children were baptized into the Armenian Apostolic Church at Mother See of Holy Etchmiadzin, one of the oldest churches in the world, in 2019. Kardashian shared photos of the baptisms with her 149 million Instagram followers at the time (she now has over 178 million followers on that platform).

West tweeted on July 4 that he is running for president, although as Forbes noted, it’s unclear just how serious he is. Nevertheless, he granted that outlet “four rambling hours of interviews” yesterday, during which he discussed his eccentric worldview. He said he no longer supports Trump and that he doesn’t mind if he draws black voters away from former Vice President Joe Biden.

Speaking to Forbes, West repeated his opposition to abortion, saying, “I am pro-life because I’m following the word of the Bible.” He also called Planned Parenthood, America’s largest abortion chain, a tool of “white supremacists.”

“Planned Parenthoods have been placed inside cities by white supremacists to do the Devil’s work,” he said.

Escalating racial tensions in the United States following the killing of George Floyd have caused pro-lifers to renew their focus on the racist, pro-eugenics views of Planned Parenthood founder Margaret Sanger, and the fact that minorities are disproportionately targeted for abortion.

The signatories mentioned Sanger’s legacy, writing, “Planned Parenthood was founded by a racist, white woman. That is a part of history that cannot be changed. While efforts have been made to undo some of the harm from institutional racism, many of these issues have worsened under McQuade’s tenure. After years of complaints from staff about issues of systemic racism, pay inequity, and lack of upward mobility for Black staff, highly-paid consultants were brought in three separate times to assess the situation. Each time, employees of color were brutally honest about their experiences, but nothing changed.”

West said that he’d had the coronavirus in February. He had “chills” and was left “shaking in the bed, taking hot showers, [and] looking at videos telling me what I'm supposed to do to get over” the virus.

West also expressed concern about a potential coronavirus vaccine and the possibility of a microchip or so-called digital tattoo being a part of it.

The development of this idea, which the article proudly notes avoids using “iris scans” that might violate privacy, was “funded by the Bill & Melinda Gates Foundation.” It “came about because of a direct request from Microsoft founder and philanthropist Bill Gates himself, who has been supporting efforts to wipe out diseases such as polio and measles across the world.”

The left-wing, pro-abortion Microsoft founder, who is not a doctor but has poured millions into shaping global health policy, also said life won’t return to “normal” until the population is “widely vaccinated” from the coronavirus.

“So when they say the way we’re going to fix [COVID] is with a vaccine, I’m extremely cautious,” said West. “That’s the mark of the beast. They want to put chips inside of us, they want to do all kinds of things, to make it where we can’t cross the gates of heaven. I'm sorry when I say they, the humans that have the Devil inside them. And the sad thing is that, the saddest thing is that we all won’t make it to heaven, that there’ll be some of us that do not make it.”

‘I don’t have all of the pieces in the puzzle’

“I have to say with all humility that as a man, I don’t have all of the pieces in the puzzle,” West told Forbes in a quote they attributed to him commenting “on being a political novice.” He said he hadn’t “developed” his foreign policy views yet, but is “focused on protecting America.” Similarly, commenting on tax policy, West said, “I haven’t done enough research on that yet.”

In forming his stance on taxes, West said he would consult “experts that serve God.”

“I will research that with the strongest experts that serve God and come back with the best solution. And that will be my answer for anything that I haven’t researched. I have the earplug in and I’m going to use that earplug.”

According to Forbes, of school prayer, West said:

Reinstate in God’s state, in God’s country, the fear and love of God in all schools and organizations and you chill the fear and love of everything else, so that was a plan by the Devil to have our kids committing suicide at an all-time high by removing God to have murders in Chicago at an all-time high because the human beings working for the Devil removed God and prayer from the schools. That means more drugs, more murders, more suicide.

West also touted his endorsement from Tesla titan Elon Musk and said his running mate will be Michelle Tidball, whose website describes her as a “Biblical life coach” who has “been involved in almost all aspects of ministry including speaking, pastoring, prayer, teaching, and the most time spent in bringing deliverance to those who are in bondage.”

Tidball lives in Wyoming, where West has a large ranch.

In 2019, in response to the notion that blacks should vote Democrat based simply on their skin color West told a radio host, “We’re brainwashed out here, bro.”

“Come on, man,” he said. “This is a free man talking. Democrats had us voting for Democrats with food stamps for years. What are you talking about guns in the 80s, taking the fathers out the home, Plan B, lowering our votes, making us abort children.”

Kanye’s 2019 remarks were a striking departure from past songs referencing abortion flippantly, as well as him and his wife Kim Kardashian using sex-selective in-vitro fertilization to have a son in 2015.

A search for “Kanye West” on the Federal Election Commission website auto-populates with two variations of the rapper’s name, neither of which when clicked has a financial summary currently available, as well as a PAC. The variations of West’s name that come up under the “candidate” label appear to both contain a reference to genitalia.