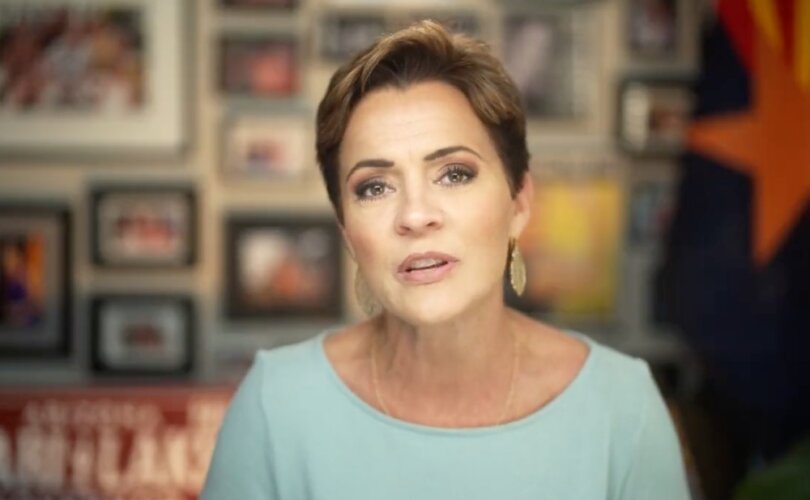 In a video that was posted to social media on November 17 and has since racked up over a million views on Twitter, Lake said she wanted to let supporters know she is “still in this fight with you.”

“For two years I’ve been sounding the alarm about our broken election system here in Arizona, and this past week has confirmed everything we’ve been saying,” she said.

Arizona, we are still in the fight. pic.twitter.com/ytaGvqG5J0

The Republican candidate and former news anchor mentioned that last year she had called on her opponent, who oversaw the election results in her role as Arizona’s secretary of state, to recuse herself from the function during the gubernatorial election.

Lake said that while opponents “ridiculed” her team for calling on Hobbs to recuse herself, “it turns out we were right.”

The fiery Republican, who has drawn solid support for her strong conservative policy positions including a hardline stance on illegal immigration and promise to ensure election integrity, went on to argue that Hobbs’ failure to recuse herself from overseeing the results of her own election led to the widespread disenfranchisement of Arizona voters.

Lake mentioned her team’s summer lawsuit calling for the state to toss out its electronic voting machines, of which an estimated 30% broke down on Election Day in beleaguered Maricopa County. In late August, an Obama-appointed judge threw out the lawsuit, arguing that Lake lacked standing.

In her Thursday comments, Lake said the election results prove her team was right to bring its lawsuit and that “malfunctioning tabulating machines forced voters to wait in line for hours to exercise their sacred right to vote.”

“Our election officials failed us miserably,” she said.

Continuing, Lake said she is “busy here collecting evidence and data,” and assured supporters that she has “assembled the best and brightest legal team” that is “exploring every avenue to correct the many wrongs that have been done this past week.”

“I’m doing everything in my power to right these wrongs,” she said. “My resolve to fight for you is higher than ever.”

Lake has subsequently begun sharing a series of videos to social media of Arizona residents who say they were disenfranchised in the election. She has asked supporters to reach out to share their experience.

Kevin, a voter in Deer Valley, says all the machines at his polling location were down. He was then directed to new and out of the way voting location in an attempt to dissuade him from voting. pic.twitter.com/7qAFNcwIb9

Lake’s defiant tone in response to her reported loss to Hobbs comes after Arizona election officials took days to count ballots before Hobbs was declared the winner on the evening of November 14.

On Election Day itself, reports emerged of widespread voting machine breakdowns in Arizona’s Maricopa County that stymied voters’ attempts to submit their ballots, LifeSiteNews previously reported. Maricopa County was the site of numerous election fraud complaints from conservatives after the 2020 presidential election, triggering a forensic audit.

The chairman of the county’s Board of Supervisors told Fox News last week the county was experiencing “some hiccups with about 20% of these tabulators,” but said that Arizona voters would have their ballots counted if they placed them in a box to be counted later by election officials.

How much garbage are we supposed to swallow before we just spit the whole thing out?

Democracy doesn’t die in the darkness.

It dies in broad daylight in Maricopa County.

In response to the malfunctions, the campaigns of Lake and Republican U.S. Senate candidate Blake Masters filed an emergency suit requesting an extension of voting hours in Maricopa County, arguing the move was necessary to accommodate voters whose opportunity to vote in person was “decreased” by voting machine errors. However, the request was rejected.

Meanwhile, a close ally of former U.S. President Donald Trump (who declared his third run for the U.S. presidency this week), Lake paid a visit to Trump at his Mar-a-Lago home Thursday, when she spoke at an America First Policy Institute luncheon.

The visit has sparked rumors Lake might be eyeing a VP role on a 2024 ticket with Trump. The popular Republican candidate previously shot down suggestions she would accept an offer to be Trump’s running-mate, saying she was focused on leading the state of Arizona. If Lake does not ultimately prevail in challenging her reported loss, however, it’s possible a role alongside Trump in the White House could be in her future.