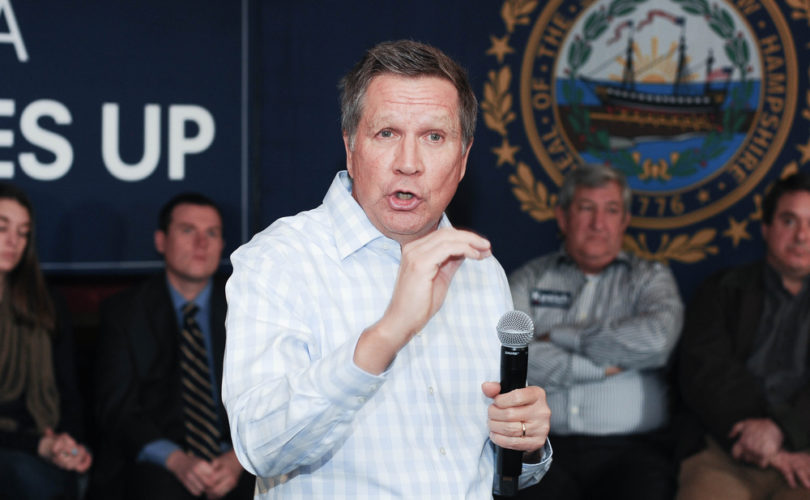 LANSING, Michigan, February 19, 2016 (LifeSiteNews) — Ohio Gov. John Kasich says he is “willing to do what I can” to stop “discrimination” against gay Americans — even as the trailing GOP presidential candidate says he supports “traditional marriage.”

Speaking to a self-identified gay Democrat in Michigan, Kasich was asked what he would do as president on the issues of same-sex “marriage” and changing laws to benefit the LGBT community.

“If I see discrimination in anything, like I said earlier, I'm willing to do what I can,” Kasich said, according to NBC. “Whether it's executive order or legislation. That's fine with me. As for marriage equality – let me be clear I'm for traditional marriage but I've been to my first gay wedding. A friend of mine is gay and got married. I went home and said to my wife, we've been invited to Steve's wedding and you know, said this is going to be unusual for us. She said, well I'm going. Are you going? And I went. And I had a great time. And there was great champagne.”

That answer didn't please the student, who said, “I don't think that's enough for you to say you've been to a gay wedding.”

“So the Supreme Court upheld marriage equality,” said the student. “Does that mean you would go out of your way to protect that right?”

“Look, we're not changing any laws,” said Kasich. “The court has spoken. That's the end of it.”

American Principles Project Senior Fellow Maggie Gallagher told LifeSiteNews that Kasich's comments should come as no surprise. “So far his acquiescence and unwillingness to show courage under fire is disturbing to many of us and I think will disqualify him in the minds of many voters,” she told LifeSiteNews. “Stay positive, Gov. Kasich, by all means, but have more courage.”

“Kasich has never been willing to say he would fight the Left's aggressive plan to redefine traditional views as bigotry,” Gallagher added. “He refuses to endorse [the First Amendment Defense Act] and pooh-poohed religious liberty concerns raised by Chief Justice Roberts as merely theoretical. Kasich refused to defend Indiana when it was attacked (or Kim Davis or Baronelle Stutzman or Kelvin Cochran or any of the many other victims of the new progressive sexual orthodoxy).”

Bob Witeck, a communications expert who specializes on work within the homosexual activist movement, said Kasich’s remarks appear targeted to the general election rather than the nomination contest.

“Kasich is clinging to a more moderate strategy in synch with his values, political judgment, and Ohio base in a very noisy and volatile field of GOP candidates vying hard for the conservative base,” Witeck, founder and president of Witeck Communications, told LifeSiteNews. “His response is aimed more towards the general election campaign, and intended to appeal to independents as well as some Democrats.”

“That said, his response is somewhat incoherent. He is straddling a number of messages that sound confusing. Most important, however, he has correctly predicted – in my experience – that marriage equality is here to stay. It is never going to be repealed nor defeated by subsequent Courts or Congresses,” Witeck added.

Ed Morrissey, a prominent Catholic blogger, columnist, and radio host, said the political ramifications for Kasich’s weak stand on marriage would likely be minimal. “I don't think this will hurt Kasich much, since his brand is more of a pragmatic fiscal conservative rather than a movement social conservative,” he explained. “It might possibly limit his reach with evangelical voters in South Carolina, but Donald Trump is scoring well among those same voters with even less attachment to social conservatism. This does not look like a game-changer, but more of a confirmation of the kind of approach Kasich takes to policy.”

The Kasich campaign did not respond to multiple requests for comment about how Kasich — who previously backed his state's law defining marriage as between a man and a woman — defined “discrimination,” and whether he would take action to restrict the religious liberty of those religious institutions and people who oppose redefining marriage.