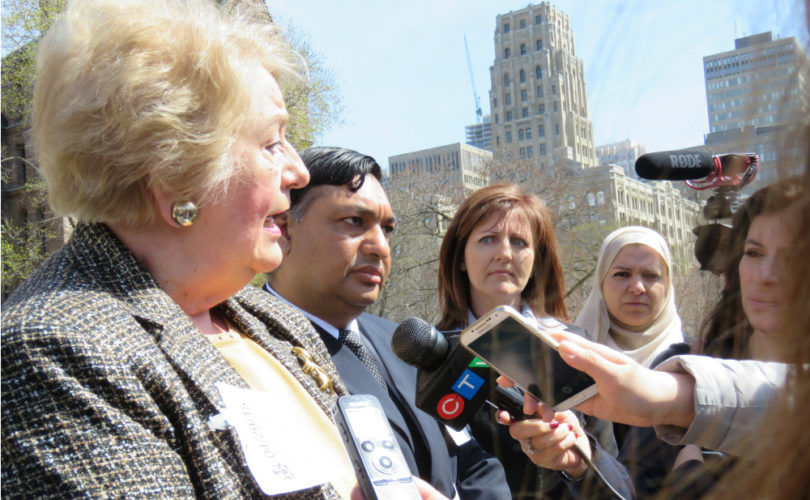 TORONTO, April 29, 2015 (LifeSiteNews.com) — Kathleen Wynne is refusing to budge on her plan to implement a controversial sex education curriculum in Ontario’s publicly funded schools this fall, say a group of parents who asked the Liberal premier Wednesday to withdraw the curriculum in a private meeting.

Gwen Landolt, one of the six-member delegation who met with Wynne April 29, said after the closed-door meeting that the premier was “implacable…absolutely rigid” and a “wrecking ball” determined to “impose her will” on the parents of Ontario.

But the parents are not backing down either.

Speaking at an informal press conference outside Queen’s Park, the six vowed Ontario parents will keep fighting an odious curriculum they say will incalculably harm their children by exposing them to explicit sexual information far too early.

La Vigne, mother of two, said she gave Wynne a copy of the curriculum with the objectionable parts highlighted.

The student response is, “People who think they will be having sex sometime soon should keep a condom with them so they will have it when they need it. They should also talk with their partner about using a condom before they have sex, so both partners will know a condom will be used.”

“We don’t want kids to feel they have to carry a condom at 11 years of age to fit in with their peers,” La Vigne said, adding that just reading out the material made her feel like crying.

While the curriculum’s defenders point out that these teacher prompts are optional, La Vigne says the sexual information is there “in black and white,” giving teachers the go-ahead to teach it and to put their own interpretation on it.

Liu told LifeSiteNews that a 6-year-old looking up “vulva” on the Internet could easily find a Youtube striptease.

She also pointed out that there is a great distinction between teaching children “refusal skills,” and teaching them sexual consent. Landolt, a former lawyer, observed that there are provisions in the Criminal Code against “encouraging” minors to have sex, and that the sex-ed curriculum arguably does the latter.

The delegation’s prepared statement to Wynne states that 160,000 people have signed petitions opposed to the sex-ed curriculum, four times more than the 4,000 parents the Liberals claim to have consulted.

As well as asking Wynne to withdraw the curriculum, the delegation asked her to “establish a consistent and transparent consultative process with all Ontario parents” and set up an “advisory committee consisting of two-thirds parents, selected by this network of parents.”

The parents pointed out that the “one-size-fits-all” sex-ed curriculum ignores the diversity of ethnic backgrounds, cultures, languages, and religions of Ontario’s students, thus contradicting Wynne’s call for an equitable and inclusive education.

They also asked that a “new parental consultation process” that would include versions of the curriculum in “multiple languages” and pointed out that “an English-only document is a barrier to inclusivity.”

The group asked Wynne to respond formally to their requests by May 5.