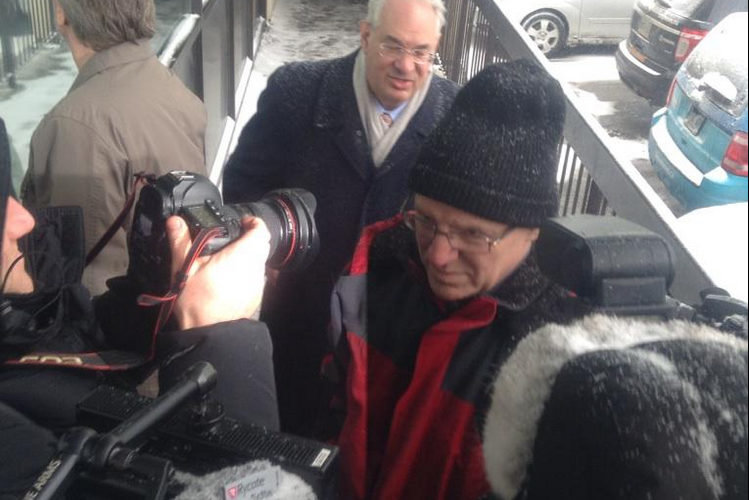 Among the more lurid details contained in the statement are the admission that Levin, in internet chats, claimed he had sexually abused his own daughters, hoped his daughters would make his grandchildren available to him for sex, and counseled an undercover officer on how to groom a child for sexual abuse. The statement acknowledges that there is no evidence Levin actually abused his children and he has not been charged for that offense.

Levin, in a light grey suit, sat slightly slumped in a chair to the left of lawyer Gerald Chan, often resting his head on his right hand and only once glancing behind at the 40 or so spectators filling the 1000 Finch Avenue courtroom.

These were news media, parents, grandparents, and the odd blogger, some of whom palpably recoiled as Dellandrea read out the statement of facts describing the events leading to the 63-year-old’s arrest on July 8, 2013.

They discovered 79 files of child pornography on two of the laptops and the external hard drive, but only 15 images and two videos were accessible to Levin. The rest of the child pornography was found in “computer system-generated folders” created without Levin’s knowledge while he used the Yahoo! Messenger program.

Levin had also created a Word document titled “aaa3” which compiled details of the approximately 1,750 people he had chatted with online “on the subject of subversive sexually interests, primarily those related to sexual contact between parents and children.”

Read: Child sex offender Ben Levin said himself that he was in charge of crafting Ontario sex-ed curriculum

Levin frequented a website, designated as “M” (as it is under ongoing police investigation) that described itself as an “alternative sexual lifestyle social networking site” with chat rooms on “incest” and “teens.”  Levin created his profile on M in 2010, describing his gender as “couple,” and his sexuality as “nothing is taboo.”  His profile, under the username BandB, had been visited 5,103 times, had 29 subscribers and was marked as a favorite by 44 users, according to the statement.

On August 7, 2012, Levin started an online chat with Toronto undercover police officer Janelle Blackadar, who posed as a “sexually submissive, young, single mother with a subversive interest in the sexualization of her children,” the statement reads.

Levin told Blackadar that “he sexually abused his own daughters and other children when they were as young as 12 years old, and encouraged D.C. Blackadar to do the same.” There is no evidence that Levin actually did so, nor has he been charged with this offence, the statement points out.

Between December 3, 2012 and January 23, 2013, Levin chatted with another undercover officer, Angela Johnson of the London Police Service. He texted Johnson that “he and his wife had been sexually active with their own daughters when they were 12, 13, and 16 years of age.”

Levin told Johnson that he “wished he had a son, but he had sexually abused a couple of boys, as well as his own girls,” according to the statement, and “also stated that he hoped his daughters would ‘share’ their own children (his grandchildren) with him and his wife,” and he “expressed his desire to have sexual intercourse with the three children” that Johnson claimed to have.

According to screenshots and transcripts provided by the crown, on December 11, 2012, in an online chat, undercover officer Johnson asked Levin if his wife was involved, and Levin answered, “Yes she started ours actually…have met a few moms into incest” which was “very arousing.” The next day Levin invited “pedo_mom_ohio” to join in three-way online chat with Johnson and asked the two “what are your views on the willingness of young ones…we are fairly dom (dominant).”

On December 14, 2012 Levin asked Johnson, “Would it arouse you if a lover wanted to include your children, force you to help.” Johnson answered, “I am perfectly cool with being forced to help but I wouldn’t want my children in pain.”

Levin then messaged Johnson, who previously claimed she had three children, two boys aged 12 and 8, and a 10-year-old girl, that: “I’d like to [have sex with] all three in front of you with your help,” and asked “Would they submit or would I need to tie them?”

According to the statement of fact, Levin chatted online with a New Zealand undercover police officer, Russell Joe Gray, from January 29, 2013 to July 4, 2013. From June 17-21, 2013, at Gray’s request, Levin “created a written story detailing the violent sexual assault of a 10-year-old child,” during an online chat between the two.

The screenshots show that in a May 4, 2013 online chat with Gray, Levin discussed another user who “liked girls 10-11” and texted: “We like the same age with parents if possible we can be quite dom (dominant).”

In a January 28, 2013 chat with Gray, the undercover police officer told Levin he was a lesbian who had had sex with a man at 16. Levin replied that, “young males are bad to learn from. …that’s why I think girls should learn from older” women or men, and it is “good if mothers help them learn.”  He added, “It’s very hot to think of mummy’s sharing their girls.”

Levin, once tenured professor at University of Toronto’s Ontario Institute for Studies in Education (OISE), texted next: “I would say kids should try it if they want at whatever age – demystify sex.”

In a later chat with Blackadar, Levin instructed the undercover officer “to ‘play with this child in order to ‘prepare her for being f**ked.’” The statement says Levin also “instructed D.C. Blackadar to spank this child for her own pleasure and digitally penetrate her. Mr. Levin asked D.C. Blackadar if she would hurt her child to ‘please him.’”

He also told the officer “to spank the child” and “stated that it was fine if the child cried and that the child should understand that more would be done to her. Mr. Levin emphasized that is was important to make the child cry.”

The “theme” of the chats between Levin and the undercover officer “was the sexualization of the officer’s child, for the purpose of her being ‘used’ sexually, both by her mother, and Mr. Levin as their ‘master’.”

The statement also notes that Levin told Gray on July 2, 2013 that he thought Blackadar’s profile was not “real,” but he never directly asked Blackadar if she was a poseur, the statement points out, “nor was it explicitly suggested that their exchanges were intended to be pure ‘fantasy.’”

Levin accessed the M chat room while traveling, chatting online while in Norway to give workshops in education to Norwegian municipal leaders.

He also made notations in his “aaa3” document about the users he chatted with, their ages, the ages of their children, “and the particular nature of their sexual desires and proclivities with respect to children.”

The statement says that Levin noted “fake” beside the names of some users, but didn’t do so for the undercover profiles of Blackadar, Johnson, or Gray.

Crown counsel Dellandrea and Ruby argued over a possible legal interpretation of Levin’s admission leading to the charge of counseling to commit sexual assault.

In the statement of fact, Levin admits he “knowingly counseled” Blackadar “to sexually assault her daughter while aware of the unjustified risk that the offence counseled was, in fact, likely to be committed as a result of his conduct.”

Dellandrea wanted to clarify that Levin was admitting not only to “a theoretical risk, but his foresight of a substantial likely risk that a sexual assault could actually occur.” The crown was concerned, she said, that Ruby would later “submit to the court that this was merely fantasy talk,” in Levin’s mind, aimed “at achieving his sexual gratification.”

“Logically and legally it’s mutually exclusive to posit a series of events, namely, the sexual assault of a child, if you believe there was no child at all,” she said.

And indeed, Ruby, while accepting the statement of fact, told the court that “Levin’s motive was to fulfill his own fantasy,” and “fantasy is different from reality.”

But Justice McArthur stated that while Levin may have believed there wasn’t actually a child, “he knew he could be wrong. He knew there could be a child…but he went ahead anyway.” She speculated that such a claim arising during sentencing – that Levin did not believe there was an actual child who could be harmed – could be an “aggravating” factor if taken as his “not showing remorse.”

McArthur also mused that the legal point, if raised at sentencing, could result in a mistrial. But she could not decide the matter without submissions. “I can’t really rule in a vacuum,” she said, adding she would deal with the matter if and when it arose again.

After Levin’s conviction, crown counsel assistant Patricia Garcia argued against permitting Levin to have Skype discussions with his three daughters if supervised by his wife, Barbara Wiktorowicz. Wiktorowicz was not an appropriate choice, Garcia said, because Levin “implicates her as an active participant in the sexual abuse of children.”

Levin often used “we,” and his moniker “BandB” refers to Benjamin and Barbara, Garcia said. “We don’t know the extent of her knowledge of her husband’s activity” nor has Wiktorowicz been charged.

However, McArthur ruled that Wiktorowicz could supervise Levin, whose bail conditions specify that he cannot have access to the Internet, nor be in the company of any person under 16, or visit any school or function where minors are present, unless accompanied and under watch of a person over 21 years of age.

The statement of fact pointed out that “Levin never believed he was chatting directly with an underage child” and that after Levin’s arrest, a police-issued press release asked any “who may have been victimized” by Levin to come forward, but no one has to date. He has apologized “unreservedly” in a statement from his lawyer.

Levin’s sentencing hearing has been set for April 13 to 15.