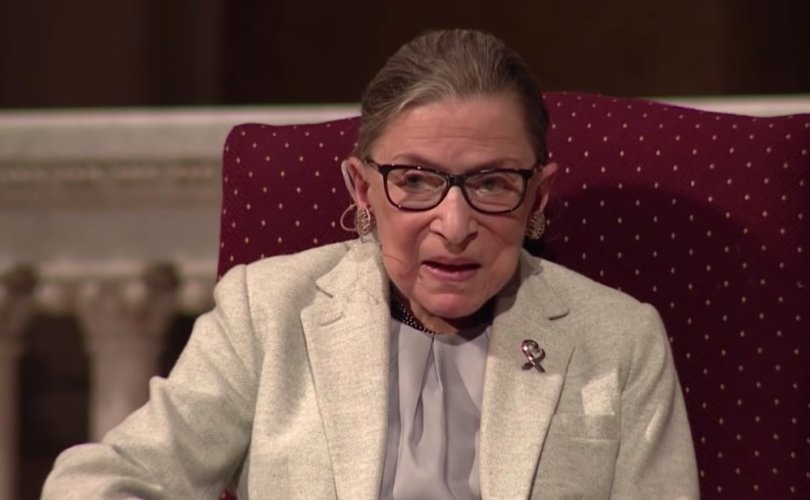 (LifeSiteNews) — Veteran liberal journalist Katie Couric has admitted to censoring politically inconvenient remarks by the late Supreme Court Justice Ruth Bader Ginsburg from a 2016 interview, writing in her new memoir that she did it to “protect” the far-left jurist from her own words.

In the 2016 Yahoo News interview, Ginsburg told the former Today Show host she felt it was “dumb and disrespectful” of National Football League (NFL) players such as San Francisco 49ers quarterback Colin Kaepernick to kneel during pregame National Anthem performances, a symbolic protest of the United States as allegedly systemically racist. Ginsburg, who died in September 2020, added that kneeling was their legal right, but she would “strongly take issue with the point of view that they are expressing when they do that.”

On Wednesday, the Daily Mail reported that Couric’s upcoming memoir Going There reveals Ginsburg had condemned Kaepernick’s actions even more strongly than Couric revealed at the time, by adding that anthem kneelers were showing “contempt for a government that has made it possible for their parents and grandparents to live a decent life. Which they probably could not have lived in the places they came from … as they became older they realize [sic] that this was youthful folly. And that’s why education is important.”

In the book, Couric says she considered the remarks “unworthy of a crusader for equality” like Ginsburg, but believed the then-83-year-old Justice was “elderly and probably didn’t fully understand the question.” Following the interview, the Supreme Court’s public affairs chief reached out to ask Couric not to publish Ginsburg’s “misspoken” words.

Couric reached out to colleagues for guidance, she recounts. Former ABC News head David Westin counseled publishing the answer because “people should hear” what a Supreme Court justice thinks, while liberal New York Times columnist David Brooks agreed with Couric that Ginsburg must have misunderstood the question.

After losing “a lot of sleep over” it, Couric ultimately decided to report on Ginsburg’s disapproval of the kneeling but not her reason for disapproving — because, Couric admits, she “wanted to protect” the left-wing icon from negative left-wing reaction to what Couric considered a “blind spot” of Ginsburg’s.

The revelation was met with expected condemnation and mockery from conservative critics of liberal media bias, but some mainstream media figures slammed Couric as well:

Not the main point here but it underscores how much the volume level of the support around RBG over the last ten years obscured a nuanced discussion of her decision to remain on the bench into the Trump presidency. https://t.co/Ur43eKclG1

Yup. This is exactly what conservatives claim about the news media. And in this case, they are correct. Katie Couric is more than just a Today show host. She was a serious news anchor. This is bad… and everyone should acknowledge it and NOT do this….

the idea that "she was elderly and probably didn't understand the question" is such blatant horse shit! Not only was RBG an active justice at the time, she answered the question clearly and extensively. Her answer was just appallingly bad, not confused

Part of the left-wing ire was fueled by resentment that the elderly Ginsburg chose not to retire during Barack Obama’s presidency, leading to former President Donald Trump’s eventual replacement of her with Justice Amy Coney Barrett instead of a like-minded Democrat appointee. Some liberal critics suggest Ginsburg’s pop-culture lionization as “the Notorious RBG” sidelined criticism of her insufficiently-woke credentials that might have gotten her to retire earlier.